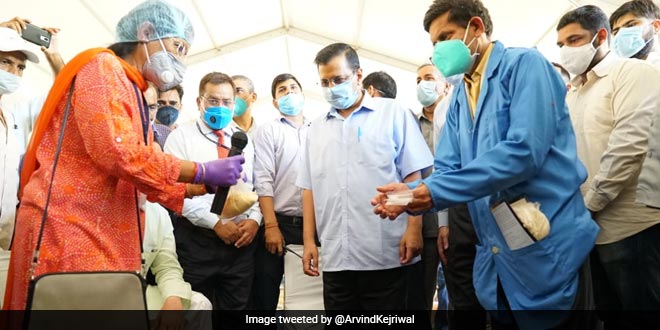 The Delhi government is preparing bio-chemicals which can reduce stubble to manure and be sprayed across 800 hectares of farmland near the national capital.

Burning the residue of crops in Punjab, Haryana and western Uttar Pradesh has often affected Delhi, especially in winters, leading to smog. Apart from wheat and paddy stubble, sugarcane leaves are commonly burnt. Although the Delhi High Court has banned the burning of stubble which makes both the soil and air poisonous, it continues every season.

Stubble burning started with mechanised harvesting which used combine harvesters. According to an official report, more than 500 million tonnes of parali (crop residue) are produced annually in the country. Cereal crops (rice, wheat, maize and millets) account for 70 percent of the total crop residue. Instead of burning the stubble, it can be used in different ways such as cattle feed, compost, roofing in rural areas, biomass energy, mushroom cultivation, packing materials, fuel, paper, bio-ethanol and industrial production.

Many policies were made by the government in the past like the National Policy for Management of Crop Residues to protect the parali, but were not implemented. Burning crop residue is a crime under Section 188 of the IPC and under the Air (Prevention and Control of Pollution) Act, 1981. However, the government’s implementation lacks strength.

Stubble burning directly contributes to environmental pollution and is also responsible for the melting of the Himalayan glaciers. Burning crop residue also causes damage to other micro-organisms present in the upper layer of the soil, making the crops prone to disease.

However, there are some solutions to the stubble burning problem. Well-off farmers can employ different machines like Happy Seeder, Rotavator, Baler, Paddy Straw Chopper and Reaper Binder to remove the stubble. But these machines are costly and state governments should come forward and provide better subsidy to farmers so that they can use these machines.

In order to tackle this issue, the Delhi government will launch a widespread campaign to curb air pollution, with an action plan that would include preparing bio-chemicals and spraying them across 800 hectares of farmland in the rural belt of the capital where farmers burn crop stubble. The Delhi government will set up a centralised system to produce bio-chemicals at Najafgarh’s Kharkhari Nahar village under the supervision of scientists from the Indian Agricultural Research Institute (IARI), which recently developed a low-cost solution to stop farmers from setting fire to paddy stubble.

The IARI will demonstrate this technology in Delhi soon and the solution will be sprayed at farmlands free of cost. The government will start spraying “Pusa bio-decomposer” solution from October 11 to prevent stubble burning in non-Basmati rice fields in the national capital. IARI has developed bio-decomposer capsules, which are used to prepare a liquid formulation. These capsules are mixed with jaggery and other ingredients. The mixture needs to be fermented over three or four days before it is ready to be sprayed. IARI scientists said that it takes over 20 days for the hard stubble to decompose into compost. The solution increases soil fertility and reduces the use of fertilisers.

Chief Minister Arvind Kejriwal said all arrangements for spraying the solution on farm fields will be made by the Delhi government and it will be provided free of cost to the farmers. The cost of its implementation will be around Rs 20 lakh. He also held a meeting with 10 government agencies, including the three municipal corporations, Delhi Jal Board, Delhi Development Authority, the traffic police, Public Works Department and the Environment and the Transport Department on October 5, where each agency submitted its action plan for winter.

Besides stubble burning and local emissions, there are certain activities in NCR cities such as Noida, Gurugram and Ghaziabad which contribute to pollution in Delhi. These include thermal plants and brick kilns and must be replaced with better technology. The fumes from thermal plants contribute to a 9 percent rise in PM 10 levels and an 11 percent increase in PM 2.5 levels. Kejriwal also discussed how to prevent suspension of dust along with other air pollution control measures.

In order to keep in check external sources of pollution such as stubble burning which are not under the control of the Delhi government, it was decided that it would work with neighbouring states and agencies so that the poor air quality could be curbed in winters in advance.

There is also a plan for launching a 17-day mega plantation drive from ITO Nursery. Thirty-one lakh saplings will be planted under the campaign slogan—“Plant Saplings, Save Environment”—with the objective of increasing the national capital’s green cover and reducing pollution by 2021. The period will be observed as “Vrikshaaropan Pakhavaada”. This whole programme will be run with neighbouring states and various committees related to environment. The target is to plant 20 lakh saplings of big trees and 11 lakh saplings of small trees and shrubs.

The central government and many others have already set different targets for planting saplings in Delhi. Under this plan, the Delhi forest department has decided to provide plants free of cost from 14 nurseries across the city. The government has also announced that those who want to play a role in saving the environment can procure the saplings from these nurseries.

The problem is complex and needs a solution. Farmers alone cannot bear the burden of reducing pollution from stubble burning. Individual small scale farmers do not have the capacity to establish a long-lasting solution. The legislature, executive and the judiciary are trying to find a solution to this vexed problem. The government must take effective and scientific measures to lift the economic conditions of farmers and fund the expenditure. It is in everybody’s interest and health to do so.

Did you find apk for android? You can find new Free Android Games and apps.
Share
Facebook
Twitter
Pinterest
WhatsApp
Previous articlePhilosophy Of Indoor Management Under The Indian Company Law
Next articleCompounding scheme, to regularise illegal buildings for money, put on hold by Allahabad High Court