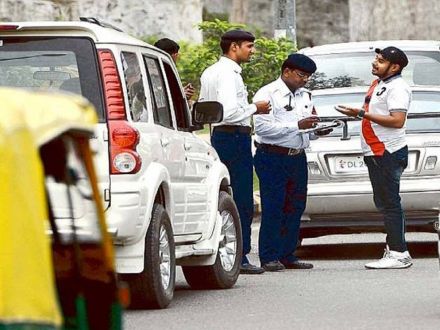 Delhi High Court on Tuesday Issued Notice on a Plea Seeking refund of Challans Issued on National Highway 24 due to default devices installed by the State on the roads and other devices for surveillance and also to direct the police authorities to not to use force upon the citizens without taking due course available under the law.

A bench headed by Chief Justice DN Patel and Justice C Hari Shankar Issued Notice to Centre and Delhi Government to sought their response and list the matter for further hearing on 23 December.

Advocate Pawan Prakash Pathak, petitioner in person contended that Delhi Police Department Issued the Statement on 15 October, 2019, that the over speeding Challan Issued between the period of September- 10th October, 2019 be withdrawal i.e. 1.5 lakh Challans. Those Challans Issued at the stretch of National Highway 24 between Nizamuddin Bridge and Ghazipur, which is close to Delhi-UP Border, of vehicles who were found to be over speeding, as Per Delhi traffic the over speed limit was 60km/hr and that’s why they issued the Challan but infact the speed on sign boards found to be 70km/hr. Following, which the department started withdrawing the challans issued between these periods.

He further alleged that the various Drivers have complained to the Department that the speed cameras installed at various places are not functioning properly and on various instances they are being Issued Challan at very minimal speed as well and to which police authorities has also agreed verbally i.e. there is a manufacturing defect in these devices and various times people are being issued wrong Challan.

The court will hear the matter next on 23 December.