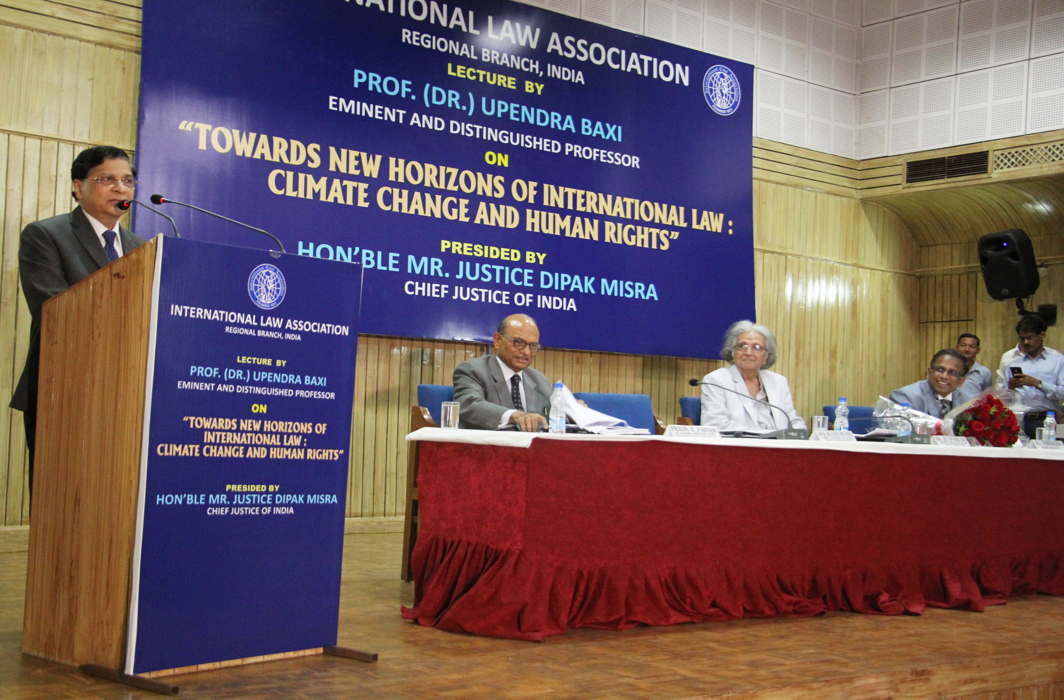 Chief Justice of India Dipak Misra said that the human rights of people in the developing world are in danger as their countries bear disproportionate costs of climate change. He observed that developed nations, being the major contributors to environmental pollution, have come to resemble the big fish eating the small fish.

“The small and developing countries which do not contribute towards pollution share more liability than the countries that contribute more towards environmental pollution,” Misra said. Referencing a Sanskrit term, he added, “Here the concept of Machchhanaya comes into play. A big fish eats the small fish. This leads to disproportionality, which itself is a violation of human rights of the citizenry.”

The CJI was giving the presidential address during a lecture on Tuesday (July 17) at the Indian Society of International Law, New Delhi while the lecture titled ‘Towards New Horizons of International Law: Climate Change and Human Rights’ was delivered by renowned law scholar and professor Upendra Baxi.

The CJI stressed the importance of environment for the realisation of human rights. “There is an interdependence between human rights and the environment. A healthy environment is sine qua non for full enjoyment of human rights, including the right to life, health, food, water, development, and liberty,” he observed.

Borrowing from British poet Herbert Spencer’s idea of “physical morality”—that the preservation of health is a duty—Misra stressed on the need for “environmental morality”.

He added that environment, human rights and business are inextricably linked and cannot be viewed independent of one another.

While professor Baxi said the Supreme Court’s 1989 order in the Bhopal Gas Tragedy gave multi-national corporations (MNCs) a free reign to violate human rights. “The Bhopal judgement simply means no law, no constitution, no rights—nothing applies to MNCs. The Bhopal judgement order said goodbye to human rights for all time to come, when MNCs are concerned,” professor Baxi pointed out.

“Climate change is a million Bhopals folded into one,” he added.

Baxi further noted that current democratic setups do not not allow for long-term strategy to mitigate climate change. “On one hand, it is regarded as anti-democratic to have anything but short-term tenure in public offices. On the other hand, climate change governance requires a clarity of conviction, commitment, and compliance, which takes its own time. Leaders change too frequently,” he said, alluding to United States President Donald Trump’s decision to pull out of the Paris Climate Accord, which his predecessor Barack Obama had signed along with leaders of 194 other countries.

“When you want to address climate change it requires a lot of work to inspire climate confidence, policy and compliance. If that is undemocratic, should we revise the idea of democracy?” he remarked.

Baxi also said that basic concepts of law—property, contracts and associations—need to be rethought: “When we think of climate change, we cannot look back at the horse and buggy jurisprudence from twelve thousand years ago.”

He drew comparisons between the terms used recently by Chief Justice Dipak Misra and Justice Ranjan Gogoi, the senior-most judge in the Supreme Court who is likely to take the helm after CJI Misra. CJI Misra had used the term “constitutional renaissance” in the verdict on the power tussle between Delhi’s Aam Aadmi Party government and the Lieutenant Governor. Justice Gogoi on the other hand had used the term “constitutional moment” at a recent event.