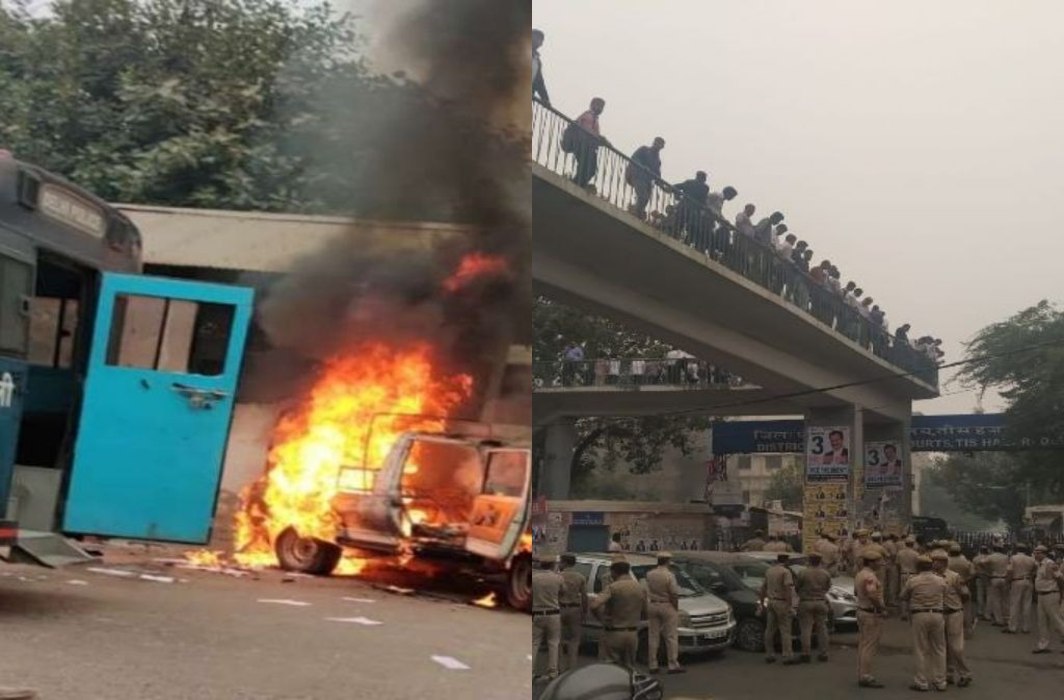 A deficient, and somewhat dysfunctional, criminal-justice system not only hinders rule of law but also impedes internal security and social harmony, which are critical for accelerated economic development and national security

India’s national capital witnessed an ugly fracas on November 02 between members two crucial wings of its criminal justice system. Policemen in uniform were assaulted and chased by groups of lawyers around various court complexes in the city. The provocation was illegal arrest and custodial beating of a young lawyer over a petty dispute in a district court complex named ‘Tis Hazari’. Spokesmen of lawyers alleged that police opened fire, injuring scores of them. Police, however, denied any firing from their side.

Over 20 policemen were injured and dozens of their vehicles torched by protesting lawyers. Clashes continued even on the subsequent day. In an unprecedented protest in history of Delhi Police, men and women of the lower rungs in ‘Khaki’ virtually seized their Hqrs on November 5. They booed their Chief who sought to pacify them.  Lawyers boycotted work for nearly a week. Entire judicial process in the lower courts of the national capital was dislocated. However, sustained efforts by senior lawyers, senior officers and members of judiciary ushered in truce and both sides resumed their respective duties after a week.

The episode may pass off as a minor aberration in India’s long struggle for a credible mechanism of rule of law. It was still shocking that in the full public gaze in the very national capital of the world’s biggest democracy, members of neither the police agencies nor from the legal profession showed any trust or respect for the due processes of law, something they are expected to protect and uphold for the entire citizenry. What worries most is that it may just be a symptom of a larger ailment afflicting the entire criminal justice system that has been sitting on far too many unaddressed and underlying conflicts.

India’s police agencies have thrown up some of the top class professionals and leaders by all global standards. Almost every year, a significant number of men and women from police agencies lay down their life in call of duty.  Nevertheless, the entire institutional arrangement suffers from deep structural flaws. It is unfit for a modern democratic nation aspiring for a great global power status. It dents credibility of not only entire criminal-justice system and also ability of state to govern effectively, jeopardizing our national security in the process.

Lower rungs of India’s police forces have longstanding reputation of notoriety. Apex Human Rights Body of the country recently observed that ‘there is not a single lawless group in the whole of country whose record of crime came anywhere near ..that of the Indian police’.

Lower rungs of India’s police forces have longstanding reputation of notoriety. Last year, National Human Right Commission (NHRC) of India recalled half a century old observation of Justice A N Mullah of Allahabad High Court to describe the Police force of the biggest state of India – Uttar Pradesh- as “an organized gang of criminals”. Dealing with complaints of extra-judicial killings, wrongful detentions, custodial murders, sexual assaults, false implication of innocents and cover-up of criminalities, the apex human rights body of the country observed: “There is not a single lawless group in the whole of country whose record of crime comes anywhere near ..that of the single organized unit which is known as the Indian police force….”.

From colonial era, the entire police edifice of India was structured as “internal military” aimed at securing the rulers by oppressing the people. Protection of rights and liberties of people were hardly a priority and some degree of corruption was tolerated or even encouraged. Independence of the country brought few changes in such character of Indian police. Nearly three decades back, a legendary senior police officer from Bihar, who had just returned from a workshop on crowd control in UK, vented his frustration in these words: “…We are still a colonial force. We do not control mobs. We shoot to kill them….”  A large number of retired police officers- known for their integrity and professionalism- have beseeched successive governments for comprehensive police reforms.

Flawed inductions, deficient trainings, seniority based promotions- instead of professional and leadership output- and lack of professional autonomy and accountability have crippled the law-enforcement capacity of the country. Successive governments have made little attempt to address these underlying conflicts. Malevolent sections of these agencies are suspected of patronizing, abetting and colluding in virtually all shades of crime. In recent years, senior officers including chiefs of even the most credible investigative agency- Central Bureau of Investigation (CBI)- have been under the scanner on charges of graft and nexus with high-profile law-breakers.

There are conflicting data on total number of complaints registered against police-personnel in India. But these vary anywhere between 50000 to half a million or may be more. National crime record Bureau placed the figure at 54,916 for the year 2015. One media report quotes that in 2018 alone there were 1.1 lakh complaints against Delhi police personnel but only 1 out of 400 were investigated. Most crimes by men and women in uniform go unreported but very often even honest among them are believed to be framed by their own colleagues.

Such a scenario must be demoralizing for a large number of police personnel who have been doing their duty diligently. Recent years have witnessed a spurt in assaults on police personnel on duty. Several entities including Human Rights Watch (HRW) have recorded inhuman working conditions of lower rung police personnel that simply dehumanize them, often evoking a beastly response in their dealings with citizens. There are multiple videos doing rounds on social media where policemen can be seen abusing, chasing and assaulting unarmed people including one involving a blind student on streets of national capital.

Uniformed cops are the most direct symbol of state. Any assault on them is an assault on sovereignty of the state. They are expected to protect citizens and command their trust through exemplary conduct and integrity. An independent democratic state needs to build a larger ecosystem that fosters such relationship between police and public.

India’s legal community too boasts of some of the most brilliant minds observing high level of scruples. However, the entire profession lacks well-defined yardsticks. Concept of hourly working wages, known in the developed world, is missing. Most lawyers thrive on prolonging litigations. High quality legal services are unaffordable not only for masses but even the most sections of middle classes with mid-rung lawyers charging fees in range of $5000 to 50,000 per appearance in cases that involve multiple hearings.

Perjury by lawyers is not merely rampant but often a norm. In some of the law schools located in hinterland of national capital, people have acquired a degree even without exposure to basics of law. Consequently, many legal practitioners, especially in lower courts, are known for both criminal records and a similar orientation, which was amply manifest during their recent clashes with the police. Nevertheless, there are still a few – though too far- lawyers who remain committed to pursuit of justice even under most adverse circumstances. They take up significant number of pro-bono cases to help the poor and needy in a system that lacks an effective legal aid by the state.

Indian judiciary, especially the apex court, has traditionally enjoyed a high degree of credibility by consistently delivering exemplary judgments on some of the most complex issues. Even now, the top court comes out with judicious interpretation of most vexed issues in public domain. I remember a decade back, a German origin British academic, Prof Werner Menski, who was my co-speaker at an event organized by Law students of London School of Economics, offered a detailed list of some path-breaking judgments delivered by India’s Supreme Court from 1950s to 1980s. These were testimony to sagacity of India’s judges of that era who used their acumen to overcome the country’s constraints in legislation to push for rule of rule of law.

Indian judicial processes are one of the slowest in the world. A lax criminal-justice mechanism not only denies citizens a uniform and consistent access to rights guaranteed by the constitution but also retards optimum economic development and national security by breeding avoidable internal conflicts.

Today, the judges and lawyers are overworked in all Indian courts. Procedures are clumsy and miscarriages of justice routine. Of late, there have been concerns even over erosion of autonomy and credibility of even higher judiciary. Judicial pronouncements have often lacked consistency, manifesting individual predilections rather than the broader concept of law and justice. Indian judicial processes are one of the slowest in the world. Law Minister recently disclosed on the floor of the parliament that as on June 1 this year, 43.55 lakh cases were pending in various High Courts, including 8.35 lakhs that were older than a decade. Such pendency in Supreme Court is nearly 60,000. These are appellate courts and pendency in lower courts could be multiple times more than the High Courts.

A lax criminal justice mechanism not only denies citizens a uniform and consistent access to rights guaranteed by the constitution. It also retards optimum economic development and national security by breeding avoidable internal conflicts. These threaten security of individuals and enterprises both and cripple collective output of a nation. It allows subversive forces and criminalized syndicates to flourish with impunity within the territory of a country. India’s quest for great power status and stronger national security cover, warrants greater innovation to boost professional-technical capacity as well as integrity in its criminal-justice system to prevent, pre-empt and deter all forms of internal conflicts.

—The writer is a former Joint Secretary in Govt of India and an alumnus of National Defence college. He is also thinker and analyst on national security and governance. Views expressed in this write up are his own