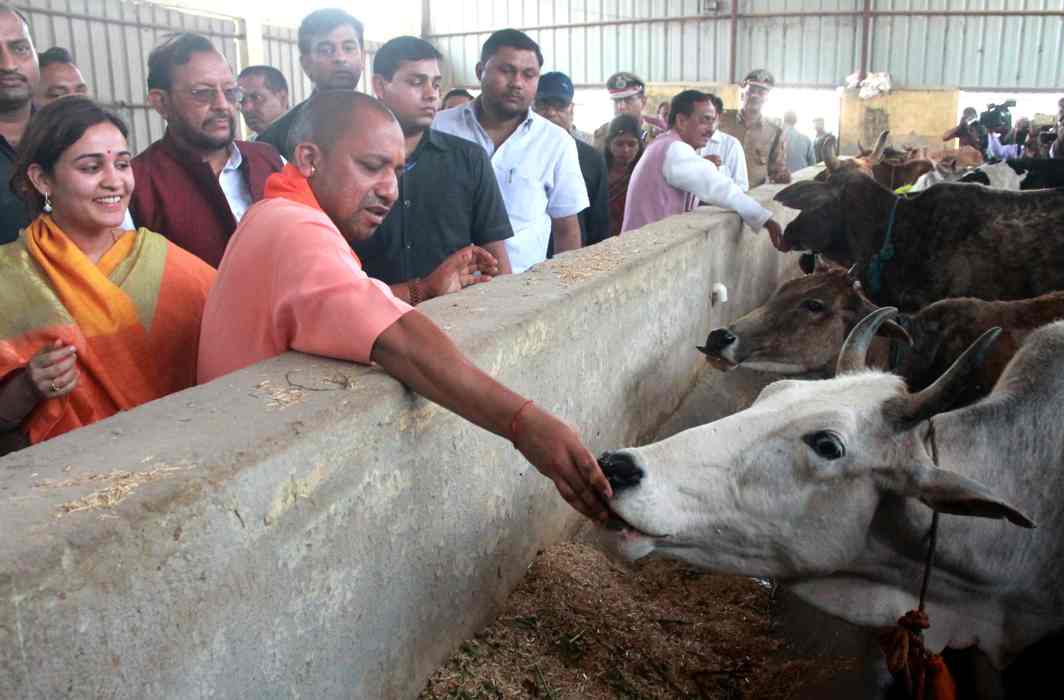 With statistics showing that existing laws to prevent cow slaughter have failed, the UP state law commission moots tougher rules

These are some of the recommendations made by the Uttar Pradesh Law Commission in a draft bill submitted to the government recently on the prevention of cow slaughter. The need for a new legislation was felt because in the view of the Law Commission chairman, Justice AN Mittal, a few amendments in the present Act won’t serve the purpose. “There are too many grey areas in the present Act which make the protection of cow and its progeny difficult. Therefore, I have proposed that it should be repealed,” Justice Mittal told India Legal.

The law panel has provided numbers to prove that the existing Act has failed to prevent cow slaughter. At present, there are 32,542 pending cases of cow slaughter in the state in which 52,159 persons are involved, it says in a separate chapter. During the last five years, verdicts in 1,125 cases have resulted in the conviction of 2,022 accused.

The highest pendency of 33,000 cases was in districts such as Gorakhpur, Bahraich, Lakhimpur, Shahjahanpur, Chandauli, Rampur, Bareilly, Meerut and Badaun.

An important recommendation made in the draft proposal was with regard to arrests made on mere suspicion of the presence of beef in any seizure. “It has been realised that in the absence of sufficient laboratories for differentiation of beef from that of the meat of other species of animals, it causes bonafide difficulties to the meat sellers,” he said.

In the proposed legislation, a provision was being made that whenever any meat or suspected body part is recovered, it should be sent to public laboratories and any action against the person from whom a seizure is made should be taken only after a lab “authenticates that the meat or body part recovered belongs to cow or its progeny”.

It is doubtful if lynch mobs would wait for a lab report before killing a person as had happened in the case of Akhlaq in Dadri in 2015.

To address the confusion over use of the term “beef” even for buffalo meat, Justice Mittal felt its definition required change. In the extant Act, “beef”, “cow”, “goshala”, “institution” and “slaughter” have been defined. In the definition of “cow”, heifer, or calf, bull, bullock, disabled, diseased and barren cow were included to make it more exhaustive.

As per the present definition of beef, there are restrictions only on sale or transport of beef. The proposed legislation has now brought “possession, store, purchase and transport of beef and its body parts” under the ambit of law. In the opinion of the law panel, the body parts of a cow and its progeny—like hide, bones and horns—are also traded and must constitute an illegal act.

An important exception has been made for keeping imported beef in sealed containers. It is the wider definition of “slaughter” which is significant in the draft legislation. Stressing the significance of proper definition of the word, Justice Mittal has proposed that it should include not only “maiming and inflicting of physical injury to cause death of the cow and its progeny” but also forced starvation of the animal by its owners, irrespective of the community to which they belong.

Citing a common practice among cattle owners, the draft legislation states that whenever any cow becomes barren or calves become “unuseful after attaining 2-3 years of age”, the owners tie their mouths and set them free. Besides being barren, these animals may be diseased or disabled. Because their mouths are tightened with a string or a net, such cows and calves cannot graze and eventually starve to death. “Therefore, the words ‘doing any act with intention of causing unnatural death’ should also be included in the definition of slaughter,” Justice Mittal proposed.

Allowing a cow, along with its heifer, to roam the streets blocking traffic and eating garbage and plastic, which are potentially life-threatening has also been made a cognizable offence. The proposed punishment for “causing trauma, pain or suffering” is three years in jail and a fine.

Taking note of attacks on those in the business of disposing the carcass of a cow dying a natural death, the proposed Bill recommends adequate safeguards “to maintain communal harmony and peace”. While under the present Act it is an offence to skin a cow dying of natural causes, the proposed bill has recommended that the “work shall be performed by the authorized contractor and such contractor shall obtain authorization from the competent authority”.

As per the proposed law, a sub-divisional magistrate (SDM) will be the competent authority for such cases and also for those dealing with transportation of cow and its progeny, which is another “grey area” in the present Act.

“The present Act,” Justice Mittal said, “does not contain any provision on preventing the transportation of cow and its progeny for the purpose of slaughter from one district to another within the state and the only offence is for transportation to any place outside the state.”

The law panel proposal says that “in the name of cattle fair and other purposes, the cow and its progeny are being transported from different parts of Uttar Pradesh” to districts bordering other states facilitating export. It also notes that cow slaughter is much more in areas adjacent to Nepal, Bihar and Haryana than in other districts. This deduction is based on pending cases of cow slaughter in the state.

To plug the loophole, the proposed law provides that if any transporter wants to ferry cow and its progeny to a cattle fair, for agricultural purposes or dairy farming within or outside the state, “such persons shall be required to take transit permit from the divisional commissioner for inter-state transportation and an SDM for within the state movement.” If refused, “the applicant may prefer appeal to the divisional commissioner or may also submit revision before the Sessions Court”.  The proposed legislation prohibits export of cows to states and areas where cow slaughter is permitted.

Due to lacunae in the present Act, smugglers and transporters of cattle have managed to escape the law which now proposes punishment with confiscation of the vehicle, the owner of the vehicle and also the clerk booking the consignment. The seizure of vehicle “will be subject to the discretion of the competent authority”.  At present, no punishment is prescribed for them.

Enhancing the punishment for cow slaughter, the new bill has proposed a maximum sentence of 10 years and a minimum of two years’ imprisonment along with a minimum fine of Rs 20,000 which may go up to Rs 1 lakh.