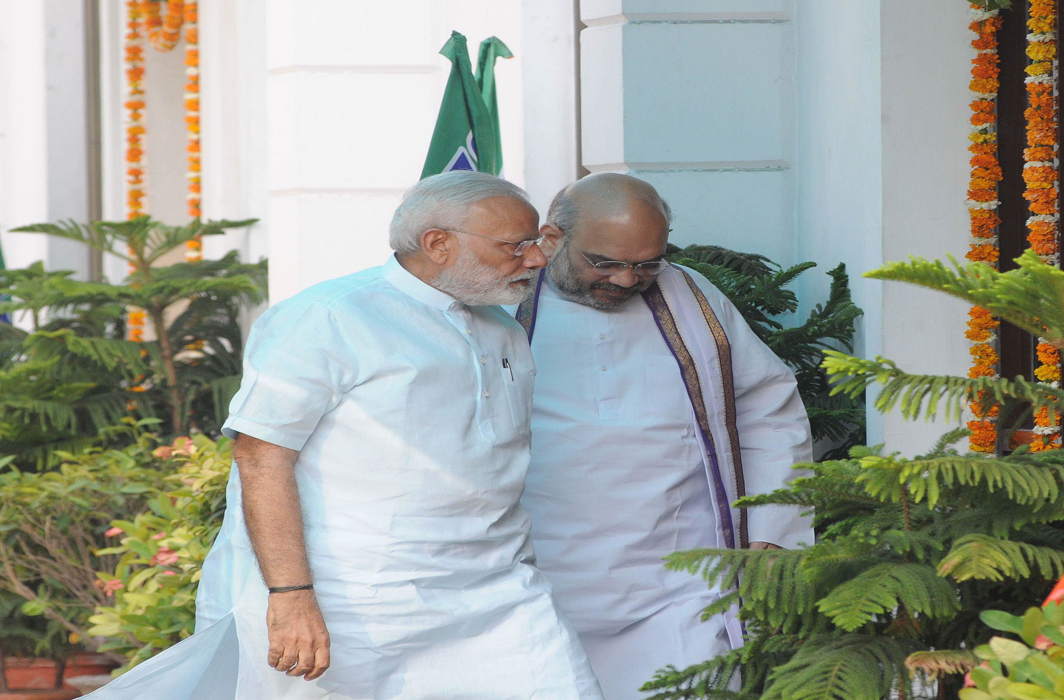 With just a year to go before the 2019 general elections, the humiliating defeat of the BJP in bypolls for four Lok Sabha and eight assembly seats spread across nine states of the country must have come as a jolt to Prime Minister Narendra Modi and BJP president Amit Shah. That the results came less than a fortnight after the embarrassment in Karnataka, where the BJP emerged as the single largest party in the May 12 assembly polls but had its hopes of forming a government dashed by the coming together of the Congress and the Janata Dal (Secular), must have added insult to injury.

Of the four Lok Sabha bypolls—Kairana in Uttar Pradesh, Palghar and Bhandara-Gondiya in Maharashtra and Nagaland—the BJP technically retained only a single seat, that of Palghar where it found its biggest challenger to be its friend-turned-foe, the Shiv Sena. Even in Palghar, the party’s massive 2.30 lakh victory margin of the 2014 polls came down to just 29,572. While victory of the Nationalist Democratic Progressive Party (NDPP) candidate in Nagaland does boost the NDA coalition’s tally by one seat in the Lok Sabha, it is widely known that coalitions with regional outfits in north-eastern states are largely unstable and open to a divorce as soon as political winds in New Delhi take a divergent course.

The victory of Tabassum Hasan, who contested on the Rashtriya Lok Dal (RLD) ticket backed by Akhilesh Yadav’s Samajwadi Party (SP), Mayawati’s Bahujan Samaj Party (BSP) and the Congress, against the BJP’s Mriganka Singh in the Kairana bypoll, is possibly the biggest disappointment for the saffron party. That it comes after the BJP lost the Gorakhpur and Phulpur bypolls—seats won by Uttar Pradesh Chief Minister Yogi Adityanath and his deputy Keshav Prasad Maurya in the 2014 Lok Sabha elections—to the alliance between arch rivals SP and BSP only proves that the saffron party needs to recalibrate its poll strategy in the state that sent its biggest chunk of MPs four years ago.

In the eight assembly bypolls—Noorpur (UP), Jokihat (Bihar), Silli and Gomia (Jharkhand), Shahkot (Punjab), Maheshtala (West Bengal), Tharali (Uttarakhand), Ampati (Meghalaya)—the BJP’s performance was even worse. The party managed to retain only the Tharali seat, though by an abysmal margin of just 1981 votes. It would not be lost on Modi that the defeat of BJP candidates in Kairana and Bhandara-Gondiya seats has now brought his party’s tally in Lok Sabha below the majority mark of 272 against the 282 seats that it had won in May 2014.

The bypoll results throw up a paradox—though the BJP’s victory march in general elections to provincial assemblies has largely continued unbridled since 2014, the saffron party has failed to retain its seats—even traditional bastions like Gorakhpur (UP) and Gurdaspur (Punjab)—in Lok Sabha by-elections. As such, it is premature to predict whether the bypoll results are in any way a referendum against the Modi regime or a template for what will happen in the 2019 Lok Sabha polls but the successive failures of the saffron party to retain its seats should be a cause of concern for the Prime Minister.

What would possibly be giving Modi and Shah sleepless nights since the bypoll result on May 30 is the fact that just as the Opposition parties are burying their differences to come together for a mahagathbandhan to take on the BJP, the NDA coalition led by the BJP is imploding.

The BJP’s defeat in Kairana, and in Gorakhpur and Phulpur before that, shows that the Opposition leaders have surrendered to the reality that they must close ranks in order to stop the Modi-Shah juggernaut.

A senior Congress leader, who is among a team of party veterans roped in by UPA chairperson Sonia Gandhi to begin seat-sharing talks with potential allies for the 2019 Lok Sabha polls, told India Legal on the condition of anonymity: “Opposition leaders realise that rivalries, ideological differences, personal ambitions can all be dealt with later. The priority right now is to work for the bigger goal—dethrone Modi. We know that in the long run, a grand coalition will only weaken our own base among voters as we will have to cede maximum ground to keep the allies happy but then, as things stand today, we face the threat of losing what we have left if we don’t unite with other like-minded Opposition parties.”

Congress sources say that the party’s efforts to build a grand coalition is being supervised by Sonia Gandhi and not party president Rahul Gandhi because the former shares a greater camaraderie with Opposition leaders who are seasoned, even wily, politicians and are not open to the idea of negotiating with her son who they still see as incapable of outmanoeuvring the Modi-Shah duo. Whether the volatile mahagathbandhan will actually succeed in taking on the BJP in 2019 is hard to predict. Another Congress leader who was part of the party’s process of firming up the alliance with HD Deve Gowda’s JD (S) in Karnataka last month told India Legal: “In a by-election, having a united Opposition candidate is easy because the decision is just about one or two seats. In a general election though, the Congress will need to give up its claim on a lot many seats which would mean pacifying as many of our own ticket aspirants. For 80 seats in Uttar Pradesh, there are already four parties—SP, BSP, Congress and RLD—and in many constituencies we feel our chances of victory are as bright as the other party. Similar situation will arise in states like Maharashtra, Madhya Pradesh, Telangana, Tamil Nadu, Assam and Andhra Pradesh.”

BSP supremo Mayawati, who would need to be kept happy if the mahagathbandhan experiment were to succeed in Uttar Pradesh and parts of other north Indian states in 2019, recently made it clear that her party would go solo in the polls if it isn’t given a “respectable share of seats”. Mayawati’s statement came after her very public display of affection towards Sonia Gandhi during the swearing-in ceremony of HD Kumaraswamy as Karnataka chief minister—an occasion that saw over a dozen Opposition leaders share the stage to give a glimpse of what the grand alliance could look like.

The Congress is also exploring the possibility of forming the sort of alliances which until now were the forte of Amit Shah—that of reaching out to fringe regional parties in states where these outfits can swing polls in a handful of seats. For instance, the Bahujan Vikas Aaghadi (which finished third in the recent Palghar bypolls by garnering a robust 2.22 lakh votes) and Prakash Ambedkar’s Bharipa Bahujan Mahasangh—both in Maharashtra. In assembly polls that happened across over a dozen states since 2014, Shah had mastered the art of aligning the BJP with such regional players in a bid to inflate the BJP’s vote share. But, like too many cooks spoiling the broth, the Congress knows that many alliance partners would mean that many more egos to massage and seats to spare—a chance Sonia and Rahul seem willing to take as of now.

The BJP-led NDA coalition appears an image in stark contrast. Take, for example, the Lok Sabha bypoll in Palghar or the assembly by-election in Silli and Gomia seats of Jharkhand. In these elections, victory largely evaded the BJP because its allies—the Shiv Sena in Maharashtra and the All Jharkhand Students Union (AJSU) in Jharkhand—parted ways to field their candidates against the saffron party nominees.

Though the BJP won Palghar, it was evident that the split with the Shiv Sena had cost it dear. Sena chief Uddhav Thackeray has already declared that his party would not contest polls in alliance with the BJP from now on—a decision that could hurt the BJP’s chances of victory in over two dozen Lok Sabha seats of Maharashtra. It may be noted that after Uttar Pradesh, Maharashtra sends the largest chunk of MPs—48—to the Lok Sabha and the BJP would ill-afford a split in its alliance while the Congress and Sharad Pawar’s NCP bury their hatchet.

In Uttar Pradesh, the BJP’s challenge is far greater. If the grand alliance of Congress, SP, BSP and RLD actually holds in 2019, the state known for its caste-based politics, would give the Opposition a formidable vote-bank of Muslims, Yadavs, Dalits, Jats and other sub-castes among the backward communities. This would even make Modi shiver, perhaps enough to have him flee from Varanasi and look for a safer seat in some other state, if not send him packing back to Gujarat.

The BJP had contested and swept the Uttar Pradesh assembly polls on Modi’s popularity. The Modi-Shah duo was literally arm-twisted by Adityanath into naming him the chief minister. But as the results in Gorakhpur, Phulpur, Kairana and Noorpur have shown—neither Modi nor Adityanath’s rabid Hindutva is proving to be a poll winner in UP any more.

The writing on the wall is abundantly clear for the Modi-Shah duo: a united Opposition, juxtaposed with the fissures within the NDA citadel, has the wherewithal to stop the saffron juggernaut in its tracks and kill their dream of returning to power at the centre next year.

The countdown for 2019 has now truly begun and saffron certainly is losing its sheen.