Even though the Election Commission in a positive move banned Modi’s biopic, it’s been hit by a slew of criticism for turning a blind eye to blatant violations, bringing into question the very integrity of its office

For a constitutional body that was meant to conduct elections in a free and fair manner, the Election Commission (EC) has come under increasing flak for recent actions. However, its move to defer the biopic of Prime Minister Narendra Modi “till further orders” and ban public screenings of “any biopic material in the nature of biography/ hagiography” which could serve the interest of a political party or candidate is positive. This has come in the wake of increasing criticism that the EC was playing into the hands of the ruling BJP by turning a blind eye to many blatant violations, while ignoring the harassment meted out to Opposition parties.

The criticism has come not from one source but a plethora of sources, including political leaders, organisations and civil servants and is unfortunate considering that it was seen as a bulwark against malevolent forces attempting to subvert India’s democracy. One only has to remember the days of former Chief Election Commissioner TN Seshan who had put the fear of God into all political parties and candidates. However, this no longer holds true as the institution is seen as increasingly impotent in the face of aggressive forces. In fact, Yogendra Yadav, president of the Swaraj India Party, went so far as to say: “Every day I think that the Election Commission has sunk to its lowest, only to be proved wrong the next day!”

Perhaps that is the reason why the EC on March 10 banned the screening of Modi’s biopic temporarily. It said political content like biopics pose a “serious threat to the level playing field as it may create an impression of truthfulness of such content being shown through television/cinema/Internet-based entertainment programmes/social media”. The EC order came a day before the movie was to be released. The order also applies to NaMo TV which too cannot be aired during the poll period. In fact, on April 9, 48 hours before voters in the first phase of polling concluded voting and when further campaigning was disallowed, NaMo TV continued to broadcast and showed Modi’s speeches even after the 5 pm deadline. It is believed that the EC’s order will also apply to the 10-part web series Modi: Journey of a Common Man which is being streamed on Eros Now platforms.

With polling under way, the Model Code of Conduct (MCC) has also come into force. But the EC has largely failed in enforcing the MCC. With six more phases to go in the polls for the 543 parliamentary constituencies, it is a moot question as to how many more violations will take place and how the EC will react to them. This is an apt time also to review the functioning of this constitutional body and the way the MCC is being implemented on the ground.

The MCC refers to a set of norms/ guidelines laid down by the EC with the consensus of political parties. It is not statutory. It spells out the dos and don’ts for elections. Political parties, candidates and polling agents are expected to observe the norms on matters ranging from the content of election manifestos, speeches and processions, to general conduct so that free and fair elections take place.

It is imperative for the EC to ensure that all political parties, particularly the ruling ones at the centre and in states, adhere to the Code. It has devised several mechanisms to take note of MCC violations, which include an army of observers, joint task forces of enforcement agencies and flying squads. The latest is the introduction of the cVIGIL mobile app through which audio-visual evidence of malpractices can be tracked and reported.

Making an appeal to caste or communal feelings to secure votes and using places of worship for campaigning are offences under the Representation of the People Act (RP Act). Bribing voters is both a corrupt practice and an electoral offence under the Act and Section 171B of the Indian Penal Code. Intimidation of voters is also an electoral offence, while impersonating them is punishable under the IPC. Serving or distributing liquor on election day and 48 hours preceding it is an electoral offence. Holding public meetings during the 48-hour period ending with the hour fixed for the closing of the poll is also an offence. Violations of all these should be taken cognisance of immediately and punished.

One of the first requirements stipulated in the MCC is: “No party or candidate shall indulge in any activity which may aggravate existing differences or create mutual hatred or cause tension between different castes and communities, religious or linguistic.” This is also an offence under the RP Act. It is incumbent on the EC to keep a close watch on all such activities and come down heavily on violators.

Unfortunately, the EC has been getting a lot of flak from political parties for failing to do its duty (see “Voices of Protest”). This was evident from its inaction on the communally polarising speeches by Prime Minister Narendra Modi at Wardha on April 1 and Nanded on April 6.

Worse was the blatant and repeated exploitation of the armed forces for election purposes. UP Chief Minister Yogi Adityanath went to the extreme extent of calling the Indian Army “Modi’s Sena”. Adityanath should have been stopped in his tracks by the EC which should have disqualified him from further campaigning. But the EC did no such thing.

Already, the Pulwama massacre and Balakot air strike were being shamelessly exploited for votes. The timidity and inaction of the EC emboldened the prime minister to go much further and ask the youth to dedicate their votes to the martyrs of Pulwama and heroes of the Balakot air strike.

Besides this being violative of the MCC, it is also defiance of specific guidelines issued by the EC prohibiting political parties from exploiting the armed forces in any manner during election campaigns. Wilful defiance of this by Modi is sufficient ground to prohibit him from campaigning and if he still defies, he could be disqualified from contesting the election.

One of the first violations of the MCC occurred on March 27 when Modi made a public announcement on TV channels about the successful launch of India’s first anti-satellite weapon as if it was his achievement. This is clear rent-seeking from the Defence Research and Development Organisation which runs on taxpayers’ money. The EC took a purely technical stand and declared that there was no violation of the MCC.

The EC’s partisanship was in question when it passed orders transferring three top police officers and the chief secretary in Andhra Pradesh and four top police officers in West Bengal, but it did not do so in Tamil Nadu where the DGP is reportedly under investigation by the CBI in a gutka scam case and where there have been repeated appeals seeking his removal.

When Rajasthan Governor Kalyan Singh made direct appeals to make Modi prime minister again, all that the EC did was send a letter for the information of the president.

Similarly, the way the EC dealt with the matter of VVPAT-based audits of EVMs is what an ordinary clerk would do. The integrity of EVMs and public confidence in the electronic voting process seemed the least of its concerns. The EC just nitpicked and indulged in statistical jugglery. The EC also made the preposterous claim that if manual counting of VVPAT slips of 50 percent EVMs was done, election results would be delayed by more than six days, whereas the fact is that it would not take more than six hours. To substantiate these absurdities, an “expert committee” report was manufactured claiming that it was by the Indian Statistical Institute, which it was not.

All these were brought out in an anguished letter written on April 8 to the president of India and the EC by 66 former civil servants, many of whom have had first-hand experience in conducting, monitoring and supervising elections from the local body to the parliamentary level. They wrote that the EC was “suffering from a crisis of credibility and endangering the integrity of the electoral process”. “The weak-kneed conduct of the ECI has reduced the credibility of this constitutional body to an all-time low….Any erosion in the people’s confidence in the fairness of the ECI has very grave consequences for the future of our democracy and we hope that the gravity of the situation will be appreciated by the ECI.”

No doubt the MCC has its limitations and this is what former Chief Election Commissioner SY Quraishi said: “It is not an Act passed by Parliament, it’s not judicially enforceable. The only action that can be taken against the violators is advice, warning or censure. No punitive action is prescribed or can be taken. 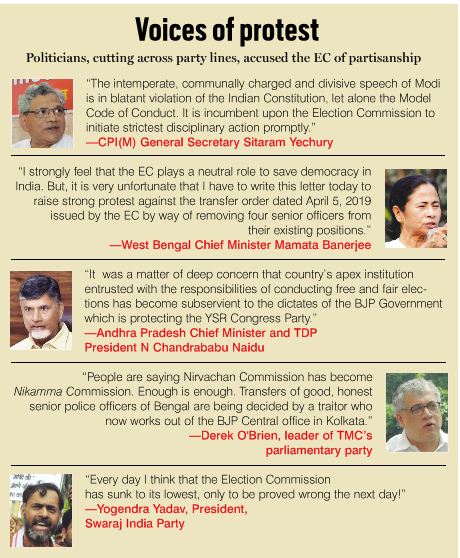 No wonder many consider it toothless. That, however, is not a true reflection of the effectiveness of this device. Its moral authority far outweighs its legal sanctity….”

The MCC may be only a moral code, but Article 324 of the Constitution certainly is not. This Article vests with the EC “the superintendence, direction and control of the conduct of, all elections to Parliament and to the Legislature of every State.…”

The Supreme Court in the Mohinder Singh Gill vs CEC case inter alia lays down: “When Parliament or any State Legislature made valid law relating to, or in connection with elections, the Commission, shall act in conformity with, not in violation of, such provisions, but where such law is silent, Article 324 is a reservoir of power to act for the avowed purpose of not divorced from, pushing forward a free and fair election with expedition….” The apex court has also observed in a catena of cases that fair and free elections are a basic feature of the Constitution.

To uphold this basic feature, the EC is vested with legal powers under the RP Act and plenipotentiary powers under Article 324. Also, Rule 16A of the MCC empowers it to either suspend or withdraw the recognition of the political party violating this Code after giving it reasonable opportunity to show cause in relation to the action proposed. Despite blatant violation of this Code and other offences by political parties, the EC is extremely reluctant to exercise these powers.

Elections and their integrity are the essence of democracy and the EC is the bulwark. It is the electoral process through which political leaders emerge to govern the country. The kind of poli­tical leaders emerging in India clearly show that the electoral process has no integrity and there is no level playing field. This is the greatest failure of the EC.

The Marxist concept coined by Friedrich Engels refers to the idea that with realisation of the ideals of socialism, the state will wither away. In the Indian context, it looks as if without realising its ideals, democracy is withering away. Is the Election Commission of India acting as a prelude to this? The jury is out.