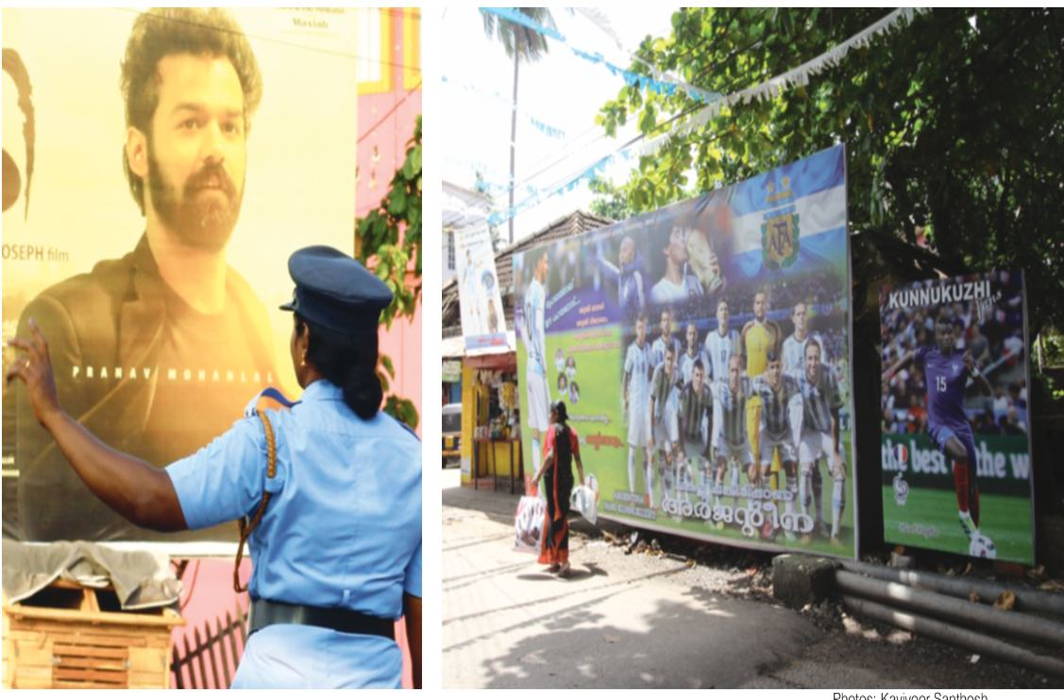 Above: Flex boards on display at various points in Thiruvananthapuram city/Photos: Kaviyoor Santhosh

As Kerala fast becomes a dumping yard for pollutants such as flex boards and hoardings, the Kerala High Court has pulled up the state government agencies for their failure to check this menace.

Acting on a writ petition, Justice Devan Ramachandran issued a directive to the chief secretary and secretary for local self-government (LSG) institutions to inform the Court whether any steps had been taken to redress indiscriminate installation of illegal hoardings and flex boards across the state. It took serious note of the fact that despite an advertisement code being in force, the state had permitted such hoardings. The Court wanted the government to inform it about whether it had taken any steps to redress the menace of flex boards under “pollution control mechanism or protocol”.

The Court observed: “A very deleterious and disconcerting situation found in Kerala in most of the urban areas and in some rural areas was the placing, positioning, and illegal installation of various brands including advertisements and self-promoting boards erected by individuals and entities on the street corners, pedestrian areas, hand railings, public posts and every other public installation as if all those areas are meant for advertisements and nothing else.”

The Court also said that the flex boards, mostly made from polyvinyl chloride (PVC), pose a grave threat to the environment. It expressed surprise at how government institutions, which follow the advertisement code permitting legal hoardings that are environment-friendly and fetch revenue, could allow illegal installations. “Such an approach by the same institutions was nothing but discriminatory and any classification between the same was illusory in the absence of any intelligible differentia and hence violative of Article 14 of the Constitution of India,” the Court said.

It observed that the influence and power of individuals and entities who indulge in such illegal activities cannot cloud the vision of authorities who are enjoined to act in the larger interests of society. The Court said though the petitioner approached it against this malaise in the locality where he is living, it is of the firm view that a parochial consideration of this cannot be taken when such instances are rampant in almost all parts of Kerala.

Top sources in the LSG department said on condition of anonymity that though the government had accepted the green protocol and directed all offices to end the use of plastic products, including disposable glasses and plates, it lacked the political will to implement it strictly. “Everybody knows the danger of allowing such boards to be used indiscriminately. These materials are non-biodegradable and can’t be used or recycled. Their burning releases extre­mely harmful pollutants like sulphates and nitrates which form a thick blanket reducing the supply of oxygen in the area. Knowing all this, the government should have taken a strong stand. But that requires a strong will,” the LSG officer told India Legal.

Indiralayam Hari Master, president of the Federation of Residents Association (FRAT), told India Legal that his organisation had been calling for effectively regulating and discouraging hoardings and flex boards in the capital city. “Most often, road accidents occur in the city because of congestion due to hoardings and flex boards on road medians and unipoles. During conferences and meetings of political parties, flex boards and hoardings invade the entire length and breadth of the city roads causing problems for two-wheelers and other vehicles and resulting in mishaps. Many lives have been lost in such accidents,” he said. Corporation authorities too have failed to act on this issue, Master said, as they get revenue from such hoardings and because their political loyalty forbids them from acting against hoardings of political parties.

Environmental activist and writer C Rahim said the menace from flex boards and hoardings had increased manifold. “People are not aware of the ill-effects of such pollutants. They even use flex boards to dry food materials. Once used, these boards are left around, adding to the city’s waste,” he said. “Imposing a fine on violators and providing cheaper alternatives and eco-friendly material would help solve the crisis,” he added.

The mayor of Thiruvananthapuram Corporation, VK Prasant, told India Legal that the Corporation was well aware of the flex menace. “As of now, we are engaging our staff and workers to lift the illegal hoardings and flex boards from footpaths, medians of roads and other public places. If the government also had stepped in to check this menace, the city roads would have been cleared of congestion,” the mayor said.

Prasant said: “Advertising materials like flex boards and hoardings are disfiguring the greenery of Thiruvananthapuram. We have understood that tourists, especially from abroad, are raising concerns over the mindless display of such contaminating material on thoroughfares. We continue to sensitise people about its ill-effects.” He wanted the government to ban the use of flex boards.

He denied the allegation that LSG bodies like municipal corporations and municipalities were encouraging the use of flex boards with an eye on the revenue to be garnered from them. He pointed out that since the implementation of GST, LSG bodies were not receiving any tax on it. He said corporations were charging only a fee which could be interpreted as illegal. He said if the government had any earnestness, it could empower the police and law-enforcing agencies and deploy a squad to check the spread of flex boards.

Even politicians indulge in duplicity. Though they may openly say that these flex boards should be curbed, they encourage it as it is more affordable compared to eco-friendly materials. Also, flex boards can withstand the onslaught of the scorching sun and heavy rains and is, therefore, a preferred choice for advertisers.

Till recently, hundreds of painters and artists used to eke out a living by painting wall graffiti, posters, banners and other propaganda material for shops, commercial establishments, political parties, NGOs and individuals. But with flex boards invading the advertisement space, these artists have become jobless. “We are not finding employment even during elections. Candidates prefer flex boards and hoardings as they get their pictures printed in glittering colours at lesser cost compared to fabric printing and other conventional methods,” said AC George, an artist in Chengannur.

Obviously, things are not above board here.