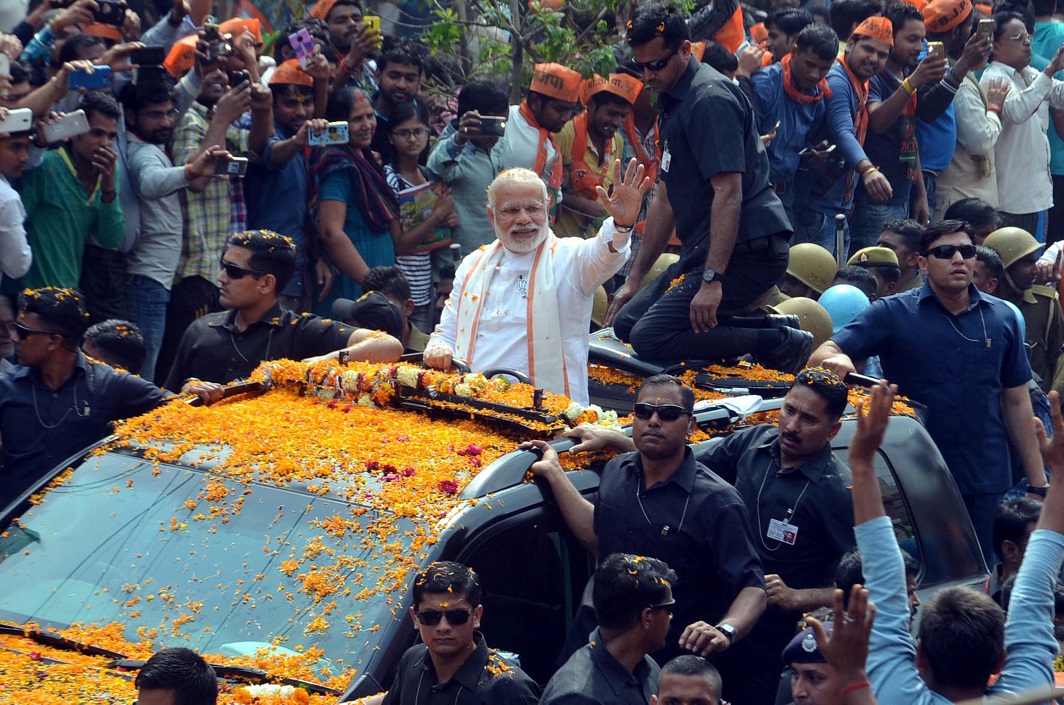 Above: Prime Minister Narendra Modi vacated his Vadodara seat in favour of Varanasi  following his election from both constituencies in 2014. Photo: UNI

Last week, a three-judge bench of the Supreme Court headed by Chief Justice Dipak Misra sought the help of Attor­ney General KK Venugopal in a PIL seeking a res­triction on politicians from simultaneously contesting parliamentary or assembly elections from two seats. The PIL, filed by Delhi BJP spokesperson and advocate Ashwini Kumar Upadhyay, raised pertinent questions on why the Representation of the People Act, 1951, allowed candidates to contest from two seats when provisions of the same law required the candidate to vacate one if he managed to win from both constituencies.

The practice of politicians, especially chiefs of major political parties and aspirants to the office of prime minister or chief minister, contesting from two parliamentary or assembly constituencies is not new to the Indian electoral system at all.

In May 2014, Narendra Modi—then the prime ministerial candidate of the BJP—chose to contest the Lok Sabha election from two constituencies, Vadodara in his home state of Gujarat and Varanasi in politically crucial Uttar Pradesh. Predictably, Modi won comprehensively from both seats but a “call from Maa Ganga” made him retain the Varanasi seat and vacate Vadodara. As required by law, a by-election was forced on the electorate of Vadodara months later. 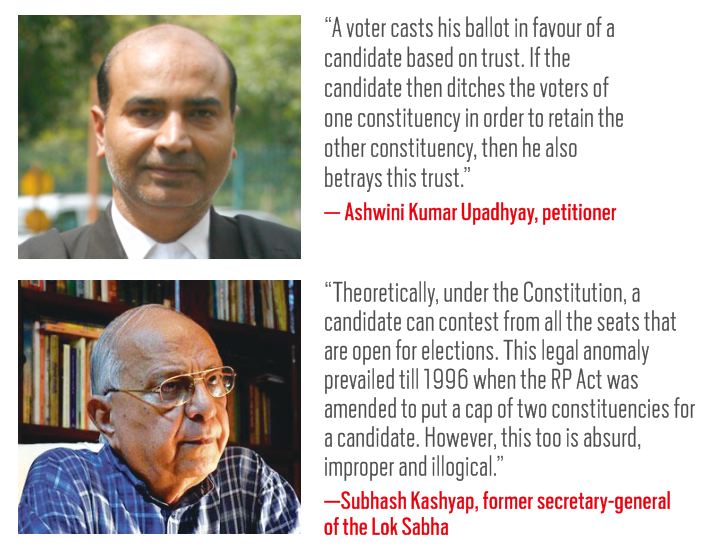 Modi is part of an elite league of politicians who have simultaneously contested successfully from two constituencies and then ditched the voters of one seat in favour of those from the other. This practice was followed in the past by the likes of former Prime Minister Indira Gandhi, outgoing Congress president Sonia Gandhi, Rashtriya Janata Dal chief Lalu Prasad Yadav, former Uttar Pradesh chief ministers Mulayam Singh Yadav and his son, Akhilesh Yadav, and many other political warhorses.

The PIL before the Supreme Court challenges the practice on a few key grounds—a) betrayal of the trust of the electorate; b) increasing the cost of the poll process; and c) delays in development works of the constituency that faces a by-poll due to imposition of the Model Code of Conduct.

Upadhyay told India Legal: “One person, one vote and one candidate, one constituency is the dictum of democracy. By allowing a candidate to contest from two constituencies, Section 33 (7) of the RP Act violates this dictum and so I have urged the Supreme Court to declare the Section void. A voter casts his ballot in favour of a candidate based on trust. If the candidate then ditches the voters of one constituency in order to retain the other constituency, then he also betrays this trust.”

Upadhyay’s PIL isn’t the first challenge to this practice of politicians contesting from more than one constituency. In fact, prior to 1996, a candidate was allowed to contest simultaneously from as many seats as he desired. Subhash Kashyap, former secretary-general of the Lok Sabha and an expert on constitutional matters, told India Legal: “Theoretically, under the Constitution, a candidate can contest from all the seats that are open for election. This legal anomaly prevailed till 1996 when the RP Act was amended to put a cap of two constituencies for a candidate. However, this too is absurd, improper and illogical. Why should a candidate be allowed to mislead the voters of one constituency when it is clear from the beginning that if he is victorious from both seats he will have to vacate one soon after being declared the winner?”

The amendment to the RP Act in 1996 was possibly the result of the then federal government and members of parliament accepting a recommendation made in May 1990 by the Dinesh Goswami Committee on electoral reforms. This 11-member Committee was constituted by the Union law ministry in 1990 and had Goswam, then the Union law minister, as chairman and veterans like BJP’s LK Advani, late Congress leader HKL Bhagat, the CPI­(M)’s Somnath Chatterjee, and former chief election commissioner SL  Shakdher among its members. It first recommended that the practice of allowing a candidate to contest from multiple seats be banned and instead, a cap of a maximum of two constituencies be instituted.

A host of political leaders, cutting across party lines, has contested simultaneous elections from multiple constituencies

Much before the RP Act was amended to restrict candidates from contesting from multiple constituencies, the late NT Rama Rao, an icon of Telugu cinema and founder of the Telugu Desam Party, repeatedly fought elections from more than one seat. When NTR made his political debut in 1983, he contested from the Gudivada and Tirupati constituencies of Andhra Pradesh and won both seats. In the next assembly elections, NTR successfully contested from Gudivada, Hindupur and Nalgonda.

NTR’s feat of simultaneously contesting from three assembly seats has arguably been surpassed only by former Odisha chief minister Biju Patnaik. After splitting from the Congress and forming the Utkal Congress, Patnaik simultaneously contested from four assembly seats in Odisha and one Lok Sabha seat in 1971. Though the Utkal Congress made an impressive debut in the Odisha assembly in 1971, Patnaik surprisingly lost all the five elections he contested that year.

In the case of Indira Gandhi, after her stunning defeat in the 1977 general election that was called after the Emergency, she famously contested the 1980 Lok Sabha polls from Medak in Andhra Pradesh and her traditional seat of Rae Bareli in Uttar Pradesh. She won both.

Years later, in a bid to prove her political acceptability and pan-India appeal, Congress president Sonia Gandhi – who was then facing attacks from the Opposition and some leaders of her own party over her “foreign origin”—successfully contested the 1999 Lok Sabha elections from Amethi in UP and Bellary in Karnataka.

As recommended by the Goswami Committee, the RP Act was amended. However, a few years later, the Law Commission, in its 170th report, which was submitted in 1999, disagreed with the Goswami Committee and went a step further to recommend that candidates not be allowed to contest from more than one seat in any election.

The Law Commission had recommended that Section 33 of the RP Act be amended and a new sub-section 7 be introduced. Its report said: “It was sought to be provided that no person shall be entitled to contest simultaneously from more than one parliamentary or assembly constituency, as the case may be. Similar provision was suggested with respect to the Council of States and Legislative Councils and even in by-elections.” However, the Law Commission’s recommendation was not met with the same enthusiasm in 1999 as the Goswami Committee report received in 1996 and the ban that it sought on politicians contesting from two constituencies was not introduced in the RP Act at all.

In the years that followed, the same recommendation has been made multiple times by various agencies. The Law Commission had red-flagged the issue in its 255th report submitted in 2015, while in December 2010, a background paper on electoral reforms prepared jointly by the Election Commission and the Union law ministry too had held that candidates should be allowed to contest polls from one constituency only.

When the Supreme Court was hearing Upadhyay’s submissions last week, the Election Commission informed the bench that it had urged the prime minister in 2004 and then again in December 2016 to make an amendment to the RP Act, reiterating its demand for the ban.

Possibly realising that the political brass was not inclined to ban the practice as it gives leaders of all political hues a buffer—even if a candidate loses from one of the two seats he contests from, the chance of entering the parliament or a state assembly is still not adversely affected—the Election Commission had suggested an alternative proposal.

It had, according to the Law Commission’s 255th report, suggested that candidates who contest and win from two seats deposit an appropriate amount of money “to the tune of Rs 5 lakhs for Assembly and Rs 10 lakhs for Parliamentary elections” as cost for the by-election that would eventually be precipitated by their vacating one of the two seats. This option was, however, rejected by the Law Commission which had said in the same report: “Such a proposal does not correct the peculiarity in the law—the exercise of conducting by-elections will still consume the ECI’s time and effort, inconvenience voters who have to go to the polling station again and most importantly, not serve as a deterrent to candidates.”

Former Chief Election Commissioner SY Quraishi confirmed that the Election Commission had “for years” been demanding that candidates be banned from contesting from two constituencies. “The recommendation has been pending for years possibly due to a lack of political will. Allowing candidates to contest from more than one seat is simply illogical and it is about time that this practice be banned,” Quraishi said.

The silence of leaders from across the political spectrum on the Supreme Court’s decision to admit a PIL which, if disposed of in favour of the petitioner, could have serious implications for their electoral ventures is telling.

A Congress leader told India Legal on condition of anonymity: “The practice of senior leaders contesting from two constituencies has more to do with boosting their chances of winning than anything else. It also helps leaders to prove their popularity and bust the myth that they have only limited public support. This is one of the factors that drove Indira Gandhi and Sonia Gandhi to contest from their traditional constituencies of Rae Bareli along with a constituency in southern India. Similarly, Modi contested from Gujarat and UP.”

Upadhyay counters this view, saying: “Democracy is about the rights of the people and not the whims of political leaders in seeking endorsements of their popular appeal.”

Obviously, a bird in hand is worth two in the bush!