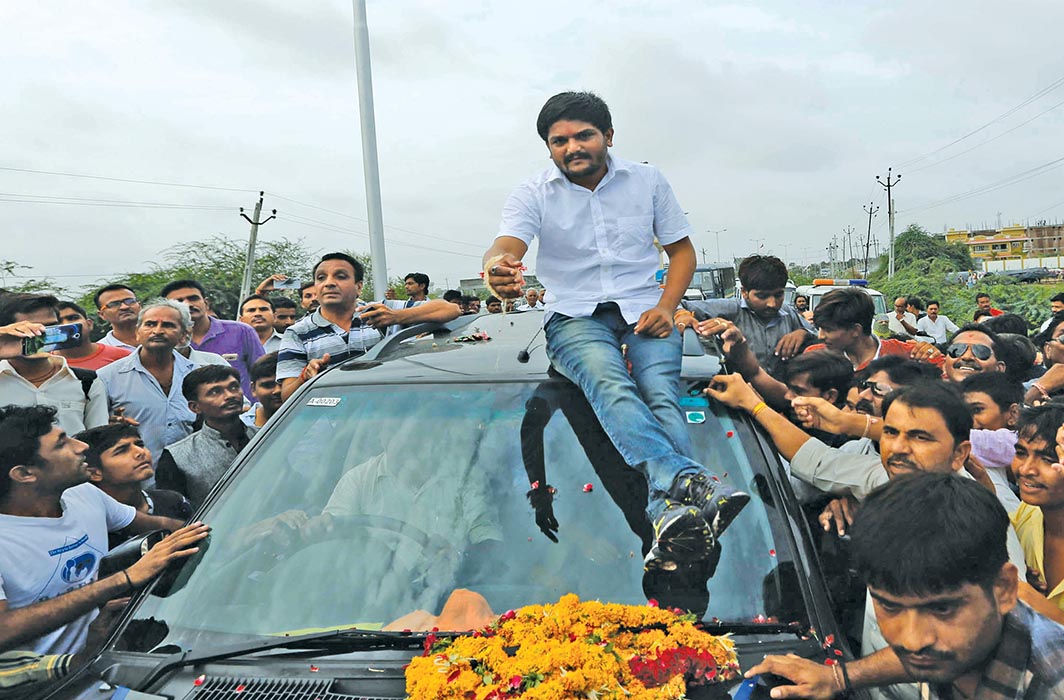 A new political axis has emerged in this state as OBCs, Dalits, Muslims and Patidars join hands to take on a government that seems to lurch from stir to stir

With less than a year to go for assembly elections, the ruling BJP in Gujarat is a worried lot. Gone is the bravado and bluster that led to the alienation of almost all major caste configurations in the two years after Narendra Modi left for Delhi. Instead, anti-BJP groups have united to take on the Gujarat government which has literally been lurching from one stir to another.

It was in November that a new caste configuration emerged in the state. A joint rally of OBCs and Dalits with support from the Patels marked the emergence of a new political axis in Gujarat. Muslims had already announced their support to the Dalits. Heading these caste configurations is a new youth leadership which is not in awe of established political parties.

Not only will a dent in the Patidar vote bank cause a setback for the BJP, but if other castes make common cause it would spell disaster for it in the 2017 assembly polls.

These leaders are: Alkesh Thakore who is spearheading the OBC-Dalit campaign under the aegis of the Ekta Manch, Jignesh Mewani who is coordinating the Dalit offensive and of course, Hardik Patel of the Patidar Anamat Andolan Samiti (PAAS). The OBC-Dalit rally had all three voicing their support for the stir.

Realizing that a mere change of chief minister—from Anandiben Patel to Vijay Ru-pani—may not be enough, the government earlier this month opened a line of communication with Hardik Patel. Predictably, the opening round of talks between the two parties failed with the warring Patels threatening to restart their stir. However, the second round on December 8 saw the PAAS delegation handing over various documents to back their claims that many states had implemented more than 49 percent reservations despite a Supreme Court order.

“Where there is a will, there is a way. The constitution provides for 50 percent reservation of which 27 percent is reserved for OBCs. Our demand all along has been that we should be included in the OBCs,” said Hardik to India Legal. The PAAS convener made it clear that the Patels would resume their agitation if they found the government lacking in sincerity.

PAAS has been demanding reservations for Patidars in government jobs and educational institutions, setting up of a statutory commission on the lines of the OBC commission for redressal of their grievances, withdrawal of all cases against Patidar leaders and initiating penal action against police officers responsible for atrocities perpetrated on them during the agitation. PAAS is also demanding a compensation of Rs 35 lakh to the next of kin of all those who lost their lives during the stir and a government job for at least one person from each of these families.

The Patidar stir, which started in July 2015, took 14 lives. PAAS activists, including Patel, were arrested and charged with sedition. Others were subsequently bailed out. Hardik was given bail on the condition that he would leave Gujarat. He has since been staying in Udaipur, though he has been permitted to shift to Uttarakhand.

For over 16 months now, many social and caste groups have been agitating against the Gujarat government. This includes the Patels, SC/STs, OBCs as well as the Dalits.

Deputy chief minister Nitin Patel said: “The government is bound by the ambit of constitutional provisions and will discuss with all concerned stakeholders to find an amicable solution.” A panel of ministers has already been set up for the purpose and he is heading it.

CAUGHT IN A BIND

Hardik’s demand for the inclusion of Patidars among OBCs is a treacherous minefield for the government. The OBCs, led by Alpesh Thakore, have already made it clear that they will not tolerate any dilution of the quantum of their reservation and have been muscle-flexing.

Ironically, the issue chosen by them is liquor prohibition. Though Gujarat has been “dry” since its birth, its present lax prohibition policy has become a magnet for anti-BJP groups to take on the government. Though touted as dry, Gujarat is as wet as a watermelon. Thakore has been organizing a series of public meetings across the state pointing to the ruinous effects of drinking and has administered an oath to his followers to shun liquor. He has been demanding a Bihar-like strict anti-liquor law. However, they intend to intensify their agitation from January next year by taking out awareness marches through 112 of the 182 Vidhan Sabha constituencies. Clearly, elections are also playing on their minds.

Such a show of force would normally have raised the hackles of the BJP government headed by Rupani. But, realizing the potential for damage that these groups can do, the government immediately asked senior cabinet minister Bhupendrasinh Chudasama to promise that the government would seek legal opinion and if need be, table a new bill in the ensuing assembly session to tighten prohibition laws. This was a departure from the earlier haughty approach of the government when glorifying the Gujarat model.

For over 16 months now, numerous social and caste groups have been agitating stridently against the government. While the Patels are demanding reservation in jobs and education under the OBC quota, SC/STs and OBCs are on the warpath against any change in this policy. Dalits have already taken up cudgels against the government after cow vigilantes lynched four of them for skinning a dead cow. And now, the prohibition policy is another weapon in their armory.

Though the opposition Congress is yet to get its act together and the Aam Admi Party is still desperately trying to stitch up some semblance of a presence in Gujarat, this caste grouping is clearly giving the ruling BJP here anxious moments.

The history of communal conflict in Gujarat is replete with instances of Dalits backed by majoritarian caste groups being at strife with the minority community. However, this traditional alignment has undergone a drastic change in the last 16 months, more so after the Dalit lynchings in Somnath district which led to a statewide Dalit outcry and forced a change of guard with Anandiben being replaced by Rupani. Muslims, who were at the receiving end of cow protection vigilantes, immediately rallied to the support of Dalits with OBCs joining the axis and the Patidar leadership also announcing its support. The clock seems to have come full circle against the ruling BJP which derives its strength from propagation of majoritarian politics.

With the prohibition issue now becoming a millstone around the BJP government’s neck, efforts to sow dissension among them have come a cropper. The agitation has virtually brought the BJP government to its knees. This was quite a change from its earlier stand where it did everything to subjugate the leaders. Hardik was kept in jail for an extended period, with sedition charges also slapped against him and others. He was even forced out of Gujarat on court orders.

But the BJP has had to eat crow now. The Patidars were the backbone of the BJP. Not only will a dent in this vote bank cause a setback to the party, any likelihood of the three castes making common cause would spell disaster for it in the 2017 polls. This could play havoc with the BJP’s chances of returning to power at the center in the 2019 general elections.

Lead picture: Hardik Patel being welcomed by supporters on arrival at his hometown Viramgam, after his release from Lajpore Central Jail in Surat, this year. Photo: UNI