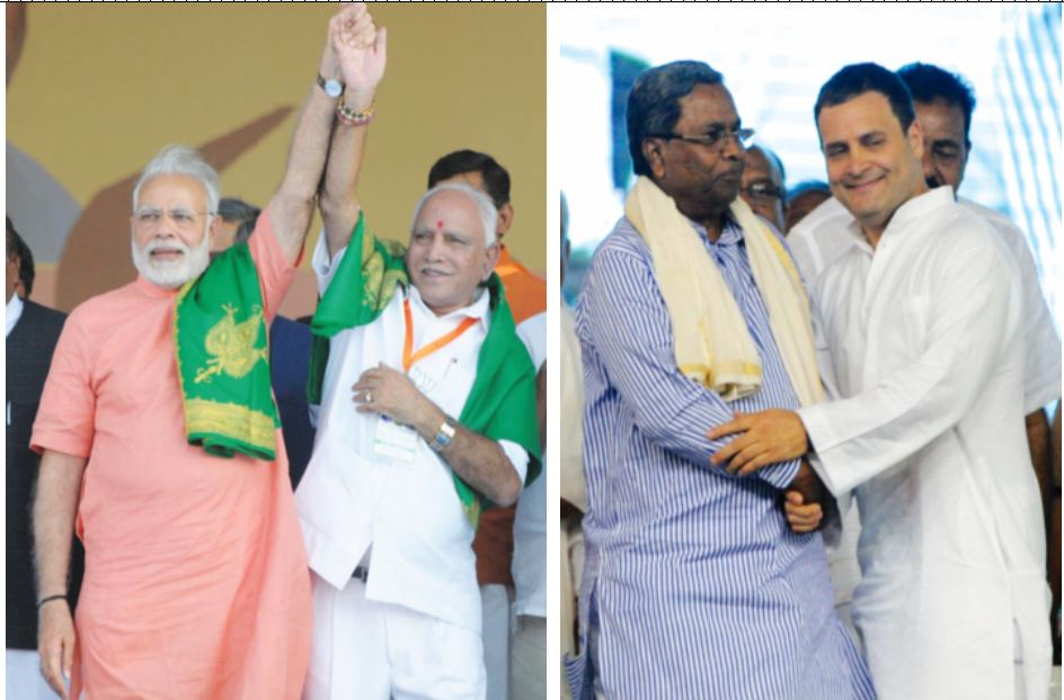 With the Congress and the BJP taking the Karnataka poll campaign rhetoric to a new low, the state poll commissioner is saddled with a pile of complaints

On May 10, 2018, the Supreme Court threw out a petition filed by a Hindu activist to debar Congress candidates from contesting the Karnataka assembly elections. The plea alleged that they were seeking votes on religious grounds by promising welfare schemes to Muslims in the manifesto.

A bench comprising Chief Justice of India Dipak Misra and Justices AM Khanwilkar and DY Chandrachud junked the plea filed by Sri Ram Sena leader Pramod Muthalik. The Court observed that promising welfare measures to a community which is socially and economically backward cannot be treated as seeking votes in the name of religion. The judges also noted that the Court cannot interfere in the elections after the notification and that too just 48 hours before polling.

In January 2009, it was the same Muthalik who had been charged by the Mangalore police with orchestrating an attack on a pub in the coastal city of Mangalore. Some young women who were consuming liquor bore the brunt of the assault. Muthalik was then barred from visiting the district for a year but last week, he scored a major legal victory when a city court acquitted 25 of the 30 accused, including him.

Muthalik is not directly linked to the BJP which is challenging the ruling Congress party in the assembly elections. But it was his hope that his plea in the Supreme Court would win him a seat at the state BJP’s high table sometime in the future.

For a long time in Karnataka, elections were fought over crucial issues related to economic development, social trends, farmers’ plight and welfare schemes. However, it is different this time. So nasty has been the campaign by both main contenders, the ruling Congress and the opposition BJP, that the chambers of the chief election officer in Bengaluru—the imposing old world bungalow that is now Nirvachana Nilaya on Palace Road—is crammed with petitions by one side or the other. Both sides threw political niceties to the wind and revelled in addressing each other in the vilest terms.

While the Congress’ Rahul Gandhi continued his temple, mosque and Catholic bishop visits, BJP star campaigners made it a point to invoke blessings from 12th century social philosopher Basaveshwara whose followers, the Lingayats, constitute the largest caste bloc in the state (18 percent, including BJP CM candidate BS Yeddyurappa).

Narendra Modi made it a point to bow before the bust of this philosopher erected on the bank of the Thames during his recent visit to the UK. Modi’s plan to offer prayers at the Pashu-patinath temple in Nepal on May 12, when Karnataka goes to the polls, is also seen as a gesture to Shiva devotees in the state.

The Congress government has already tried to divide the Lingayat community by declaring it a religious minority—the community can influence up to 100 seats in the 224-member assembly.

Religious connections apart, the Congress is going to town with legal attacks too. “The Prime Minister of India himself has brought the level of rhetoric to a new low,” points out Congress MLC and legal eagle VS Ugrappa who filed a Rs 100 crore defamation suit against Modi and BJP party chief Amit Shah for defaming the Congress CM candidate, Siddaramaiah. From accusing the Congress of being “a 10 percent sarkar” to accusing Siddaramaiah of accepting a Swiss luxury watch as a bribe, the BJP has also stepped up the gas against the Congress. The party has raked up the Hublot watch issue again, accusing the CM of accepting this expensive gift from a Malaysian businessman on the sidelines of a World Economic Forum meeting abroad.

The Congress, meanwhile, has lodged a complaint with the Election Commission of India (ECI) demanding prosecution of mine baron and former minister G Janardhan Reddy for making distasteful remarks against the chief minister. Ugrappa claimed that Reddy, while addressing a press conference in Molakalmuru, compared BJP candidate B Sreeramulu to Lord Rama and Siddaramaiah to Ravana. He reportedly said Sreeramulu had come to annhilate “Siddaravana”. The Congress said that Reddy also stated that “Mother Banashankari has created Sreeramulu to finish Siddaramaiah.”

Ugrappa says that this is a clear violation of IPC Section 171 and Section 125 of the Representation of the People Act. The Congress wants the Election Commission to initiate prosecution against Reddy and others as per the provisions of law.

Modi campaigned for Sreeramulu and Reddy’s brother, G Somashekara Reddy—the BJP candidate in Bellary City—during an election rally in Ballari earlier in May.

Although the Supreme Court has barred Reddy from coming to Ballari—earlier spelled Bellary—the Reddy brothers have huge influence over the region and are hoping to help get at least 30 seats for the BJP kitty on their own. Rahul Gandhi also slammed Modi over allegations that Sreeramulu had bribed a former chief justice of India for a favourable order.

The Congress is demanding a high-level inquiry into the alleged bribery case. Sreeramulu is taking on Siddaramaiah in Badami constituency, one of the two seats he is contesting alongside Chamundeshwari in his home district of Mysore.

Recently, the Bengaluru police registered a criminal case against 14 people, including the Congress’s sitting MLA and Rajareshwari Nagar candidate N Munirathna, in connection with the seizure of nearly 10,000 voter ID cards from an apartment in Bengaluru’s Jalahalli area. The Police said they had named the apartment owner, Manjula Nanjamari, and others as accused persons based on the complaint lodged by a Bruhat Bengaluru Mahanagara Palike official, who led a flying squad to check violations of the model code of conduct and raided the premises. Nanjamari, the Congress says, is a BJP member though she denies it. Deputy Election Commissioner Chandra Bhushan Kumar has sent his report to the Election Commission after investigating this incident. “Multiple reports are with the Commission for its consideration,” says Karnataka Chief Electoral Officer Sanjiv Kumar.

Siddaramaiah’s trusted lieutenant, Munirathna, says the police complaint is part of concerted propaganda to harass and humiliate him. Mere naming of a person in the FIR is no bar to contesting the polls. Bangalore Central BJP MP PC Mohan says, “It is war between the good and the evil, the garbage city and the garden city. We want to bring back the heritage of the state.”

While both parties—the BJP and the Congress—are latching on to Basava and his verses or vachanas with the JD(S) on the margins, it is the litany of petitions before the courts and the Election Commissions that have changed the face of the assembly polls.

The huge volume of complaints suggests that the composition of the new assembly is likely to witness fluctuations even after the results are announced on May 15.