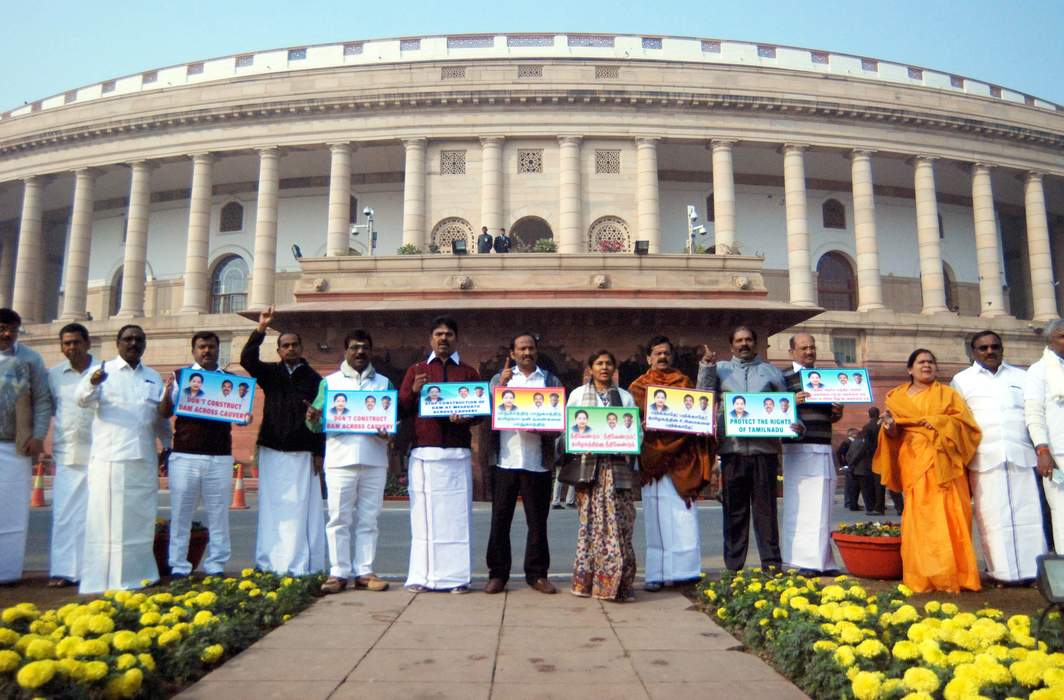 Above: AIADMK MPs staging a protest in front of Parliament/Photo: UNI

The apex court is looking into the need for a conduct code for politicians. But is it needed at all when there are several checks and balances to ensure that they behave with the highest ethical standards?

Do central and state ministers need a new code of conduct and a tighter gag? This question arose as a five-judge Constitution bench of the Supreme Court headed by Justice Arun Mishra is looking into this issue. The bench is examining the need for “greater restrictions” on high public functionaries to protect citizens’ rights.

There are two petitions before the Court in this regard. In one case, family members of the victim in the Bulandshahr rape case (2016) complained about former Uttar Pradesh minister Azam Khan’s public statement that the rape case was part of a political conspiracy against the Akhilesh Yadav government. The second is a petition by Joseph Shine, a Malayalee, about alleged derogatory remarks made by Kerala minister MM Mani against women. The petitioners appealed to the apex court to direct the centre to formulate a tighter code of conduct for ministers.

Arguing against this, Attorney General KK Venugopal contended that the apex court had taken a consistent stand against any further restrictions on free speech of citizens, and public functionaries were no exception. The Administrative Reforms Commission in its fourth report had suggested that in addition to the code of conduct for ministers, there should also be a code of ethics. However, the Empowered Committee had rejected this recommendation saying it would only be duplication and might not serve the purpose.

A code for Union ministers was adopted in 1964 and state governments were advised to also adopt it. The Union home ministry’s code of conduct, as amended in 2013, stipulates that ministers should declare their assets and liabilities and those of their family members to the prime minister (PM) and sever all connections with their businesses once they become ministers.

Other points stipulated in the code of conduct were that no minister should accept contributions of any kind. Their spouses should not take a job under foreign governments. Accepting valuable gifts except from close relatives is taboo. Any gifts they receive from foreign countries exceeding Rs 5,000 in value should be sent to the Toshakhana.

While on tours, ministers should stay as far as possible in government accommodation. They should avoid attending lavish parties and indulging in pomp and pageantry.

That is not all. According to Article 324 of the Constitution, the Election Commission has the power to monitor the centre, state governments, all candidates and their respective political parties. The Model Code of Conduct (MCC), which is getting refined by the day, comes into play as soon as the Commission announces the election schedule. Even before they contest, candidates have to declare their assets and liabilities to the Commission and their criminal background, if any.

The Commission has devised many rules for campaign spending and timings, graffiti and general conduct. However, what is lacking is that the MCC is not enforceable by law, though certain provisions may be implemented by invoking corresponding provisions in other laws such as the Indian Penal Code and Representation of the People Act, 1951. The Commission has been demanding more teeth but the government has not undertaken any strong electoral reforms.

Just like other Parliaments, including the UK, US, Canada and even Pakistan, have a certain code of conduct with regard to speech and behaviour of members, the Indian Parliament too has a permanent standing committee on ethics in both Houses. The Rajya Sabha committee was inaugurated by then chairman KR Narayanan on May 30, 1997, and in the Lok Sabha on May 16, 2000. As ministers are primarily members of either House, they are subject to disciplining by the standing committees. Besides overseeing the moral and ethical conduct of the members, the ethics committee also formulates a code of conduct for them, which is amended from time to time. It also examines the cases referred to it by the House.

However, there are some differences in the two House committees. While the Rajya Sabha’s ethics committee acts on complaints and takes up issues suo motu, the Lok Sabha’s committee acts only on complaints made either by the public or a member of the House. The Rajya Sabha also has a “Register of Members’ Interest” where MPs have to declare their interest in various issues such as remunerative directorship, remunerated activity, majority shareholding, paid consultancy and professional engagement. The code requires ministers to relinquish not only their business activities, if any, but also affiliations to other institutions, including charitable ones. Apart from the “cash for query” scam when 10 members who were alleged to have taken money for asking questions were expelled from the Lok Sabha in 2005, the House does not maintain a list of complaints and enquiries. This is a drawback which needs to be plugged.

The state assemblies have their own rules regarding declaration of assets and other issues of financial discipline. Most states, however, do not monitor the rules of the code of ethics.

So when there are so many checks and balances, why do we need a new code for ministers, chief ministers and the prime minister? Why is the Constitution bench looking into this unless it has found some prima facie evidence? There is no doubt that those holding public office must submit themselves to scrutiny as their decisions and actions should be shining examples of probity. Ministers, be it at the centre or in states, are expected to behave with the highest ethical standards. They have a moral responsibility to preserve the reputation of their office. They should make decisions purely on merit. There must be no compromise on integrity and no room for arrogance.

The petitioners probably want to check politicians from making misleading and false accusations about their opponents. After all, elections in India are often remembered for heated personal attacks, negative campaigning and intemperate speeches. In their attempt to assert their superiority over their opponents, leaders of most parties often go overboard and do not differentiate between the public and private lives of their rivals. Therefore, there is need to ensure civility in political speeches and expression by having a tighter code of conduct.

Till the debate for a tighter code of ethics is decided, it is important that the dos and don’ts regarding the personal ethics of central and state ministers are implemented by the PM and chief ministers. If there is any laxity in maintaining a certain code of ethics, it is not because they are not there. It is because there is no political will to implement them. Even if the court directs the government to come up with a stricter code of ethics, the real test is how far they will be implemented.