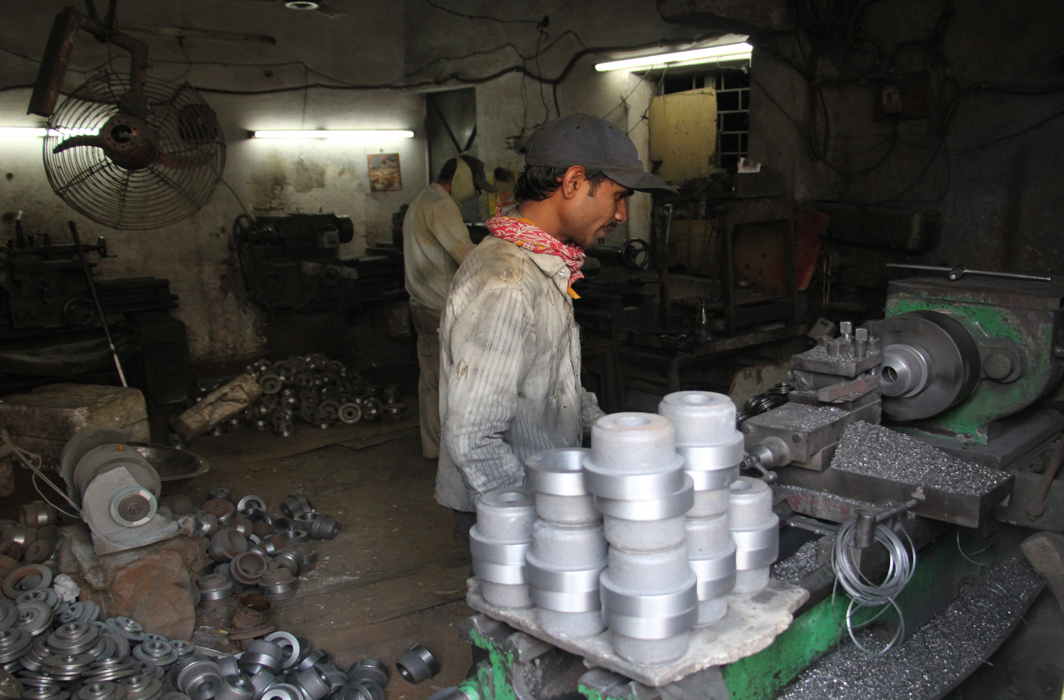 Above: A worker in a steel factory in Wazirpur, New Delhi (file pic)/Photo: Bhavana Gaur

India’s employment statistics are in turmoil due to inadequate surveys further fuelling the debate over unemployment scenario in India. India Legal in its first part of the two-part series tries to look into the current scenario of surveys being done to assess unemployment and other related factors

Indian employment statistics are currently in between jobs. With the old season of labour surveys over, the NDA government is adopting new methods amid delays and questions over credibility.

The Ministry of Labour and Employment and the Ministry of Statistics and Programme Implementation used to conduct surveys that calculated unemployment in the economy. But in their place the government has launched a new survey and is also advocating the use of payroll data to measure job creation.

As India heads into general elections next year, jobs will be the biggest priority of voters, according to Mood of the Nation Survey 2018 by Centre for the Study of Developing Societies (CSDS), a non-profit organisation. The survey adds that Indians believe jobs have become harder to find since Narendra Modi took over as Prime Minister.

The government has said that measures such as labour reforms, skill training programmes, and entrepreneurship schemes have increased employment. But there is no recent official estimate of the overall job situation in the country, especially since the announcement of demonetisation and the rollout of Goods and Services Tax.

The employment-unemployment survey of the Labour Bureau, under the union Ministry of Labour and Employment, had served as the only annual official estimate of employment until the government announced that it has shut down the survey on the recommendations of a task force set up to study employment statistics.

The World Bank estimates that Indian workforce itself is only about 52 per cent of the country’s working age population, and that 77 per cent of this workforce is engaged in vulnerable forms of employment (unorganised sector) , characterized by inadequate pay, low productivity, and difficult work conditions that undermine the fundamental rights of workers. According to the 2011 government census, 54.6 per cent of Indian workers are in the agriculture sector.

The Labour Bureau conducted its final survey for 2016, but the results have been delayed. Daljeet Singh, Deputy Director General of Labour Bureau, said that the data is being compiled and the results are expected to be released in September. The 2016 survey is crucial as it would be the only official measure of unemployment right before demonetisation, and even though this survey has now been stopped, it could be perused for comparisons with other surveys held after demonetisation.

In its report titled Jobless Growth?, the World Bank predicted a rise in unemployment in India in both 2018 and 2019. “India must create 8.1 million jobs a year to maintain its employment rate, which has been declining based on employment data analysed from 2005 to 2015, largely due to women leaving the job market,” it said, using International Labour Organisation’s estimates. The World Bank added that for India to achieve higher growth, it needs to create safe, flexible and well-paying jobs for women.

Prime Minister Modi however in a television interview earlier this year said, “Lies are being spread about employment.” He cited a study “by independent agencies”, which says that seven million jobs were created in 2017.

The study was conducted by Soumya Kanti Ghosh, chief economic adviser at State Bank of India group, and Pulak Ghosh, a professor at Indian Institute of Management Bangalore and Senior Fellow at Niti Aayog. The researchers relied on payroll data—the number of new employee accounts opened mainly with the Employees’ Provident Fund Organisation (EPFO)—provided to them by Niti Aayog.

Pulak Ghosh also served on the five-member task force upon whose recommendations the government says it ended the annual survey of the Labour Bureau.

“Everything can’t be a conflict of interest,” Pulak Ghosh said on questions over the independence of his study. “Just because I’m part of Niti Aayog does not take away my independence. It’s a think tank. I’m not under PMO (Prime Minister’s Office).”

But he confirmed that the authors first presented their findings to PMO before releasing them as an independent study.

“If, say, for every five informal employees, four lost their jobs due to the GST and demonetisation and one became formal, this study will count it as one new job created,” Jairam Ramesh, a Member of Parliament from Congress, and Praveen Chakravarty, Senior Fellow at IDFC Institute, wrote in The Hindu. “It is well-known that when an employee loses her job or stops working, her membership from the EPFO database is not removed automatically. So, the EPFO data set may reflect new additions accurately but not deletions, i.e. job losses.”

“Job loss is a different issue. We are not talking about net jobs,” Pulak Ghosh said in defence of the study. “Almost every year there are job losses. We tried to measure job growth.”

“There is growth without rise in wages, but jobless growth is a myth,” he added. “Unless the narrative shifts from this, India will never look at wage growth.”

Apart from Labour Bureau’s survey, the other official estimate of jobs came from the employment survey of the National Sample Survey Office (NSSO), under the union Ministry of Statistics and Programme Implementation. The survey was quinquennial—carried out once every five years. The last survey was conducted in 2011, so the next was due for 2016, but it has so far not been conducted.

“It is a cause of concern where the ministry or NSS division have not stuck to their timeline,” said Amey Sapre, a consultant at the National Institute of Public Finance and Policy.

The government for now has rolled out a new employment measure called Periodic Labour Force Survey, which will also be conducted by the NSSO.

“The quinquennial survey is in a phase of transition,” said MVS Ranganadham, Director General of Central Statistics Office under the statistics ministry. “PLFS has been launched. It is going to give more frequent data. It will give quarterly data for urban sector, and annual data for urban and rural sectors combined.”

“Once PLFS gets stabilised, then we will take a view on the quinquennial survey,” he added.

Since PLFS will not overlap with the existing government surveys, it is unclear how well the new estimates can be compared against older ones.

“PLFS has been planned in such a way that it would be comparable,” Ranganadham said. “We haven’t seen a single result of PLFS so far, likely to come at the end of this year. Once that comes, we will have an idea how it compares with the quinquennial survey.”

“When you are producing statistics within the government, there might always be a doubt in the minds of people about how professionally independent the persons involved in production of statistics are,” Ranganadham said.

He added that PLFS will be designated a “core statistic” under the new National Policy on Official Statistics, whose draft was released last month by the statistics ministry. The draft says that data sets classified as core statistics will be subject to more rigorous standards.

But the policy is yet to be enforced even as work begins on the first round of PLFS. Concerns on timelines and quality are also exacerbated by a number of vacancies in the country’s statistical regime, including for the top post of Chief Statistician of India.

The government could possibly shoot two birds—efficiently conduct the survey and also get favourable numbers—if it first filled up the vacancies in its own backyard.