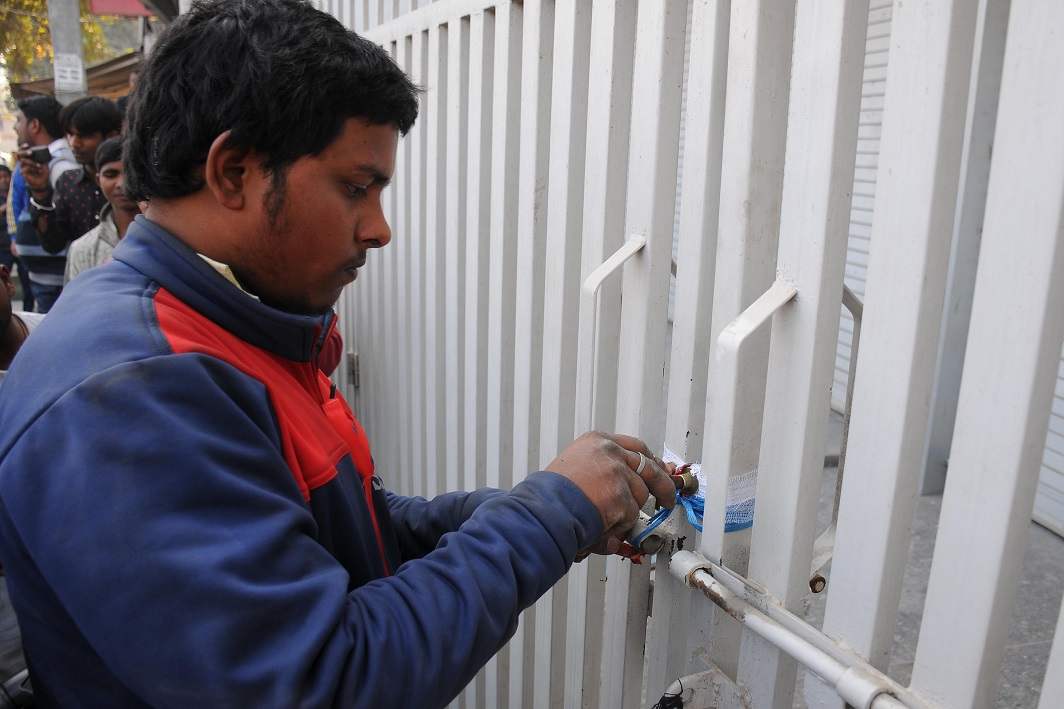 Above: The MCD sealing shops and farmhouses in Chhattarpur, Delhi, after an order from the SC monitoring committee

Despite warnings from the apex court about illegal commercial establishments, various governments in the Capital have turned a deaf ear to them

Even as the orders of a Supreme Court-appointed monitoring committee— which said that all commercial establishments flouting provisions of the 2021 Delhi Master Plan would be sealed—took off in full swing, traders hit back with a 48-hour strike from February 2. It was initiated by the
Confederation of All India Traders (CAIT). And to muddy the waters further, a DDA meeting chaired by Delhi’s L-G Anil Baijal (who is also the DDA chairman), relaxed strictures to enable the traders to wriggle out of the legal mess.

While this was a trader-friendly move, it was also a political masterstroke by the centre to corner AAP’s Delhi government which couldn’t come up with a solution for its embattled traders. They could now form a captive vote bank for the BJP. In the backdrop of the disqualification of 20 AAP MLAs in the “office of profit” issue, this is another setback for the Arvind Kejriwal government of Delhi.

The Supreme Court order and the subsequent formation of a special committee by the Court to oversee the demolition of illegal establishments in the Capital was known to all. But the fact that subsequent governments as well as L-Gs failed to implement the order was an administrative lapse for which the traders are suffering today.

On February 2, awakened after years of slumber, the DDA quickly passed three proposals—higher floor area ratios (FAR), reduced conversion charges and regularising agricultural godowns. Those were the amendments to Master Plan 2021 which formed one of the pillars of the top court’s order. These would provide immediate relief to the traders. On its part, the Delhi government has decided to move the Supreme Court to request it to postpone the sealing process by six months.

DDA’s concessions might have come a trifle late and it is not clear whether the traders have been pacified. In interviews with APN TV news channel, India Legal’s sister concern, traders in shuttered Chandni Chowk said that the government and the police were hand-in-glove in first allowing illegal establishments to come up—assisted by liberal palm-greasing—and then shuttering them.

However, this may not be correct as Delhi Police is not under the control of the state government, but the L-G.

The sealing drive went on in full swing in many parts of the Capital for non-payment of conversion charges. The hurry on the part of the L-G is seen in certain circles as a move to counter preparations for possible mid-term elections which the Delhi administration may be coming up with in the backdrop of the disqualification of the 20 MLAs.

Union housing and urban affairs minister Hardeep Singh Puri has been quoted in the media as saying: “Even if we get the whole thing passed by the authority (DDA), 45 days for public hearing will not only (deepen) uncertainty but also create chaos. This will also become an issue of public order.”

The legal angle has also been dealt with by Puri. He said: “We will file an affidavit before the Supreme Court prior to the next date of hearing on January 7.”

In a judgment in December 2017, the Supreme Court said: “A reading of the judgment and order dated 7th May, 2004 makes it apparent that this Court expected all those concerned with governance of Delhi to adhere to the rule of law and ensure its implementation.

“Unfortunately, this Court was anguished by events that demonstrated that the trust reposed was belied in terms of action for implementation of the law and that industrial activity continued in areas despite the Master Plan for Delhi, meaning thereby that impermissible industrial activity continued in residential areas in Delhi.” Those were early signs that the court’s orders were being ignored by subsequent administrations.

The order also said: “This Court noted that according to the Delhi Government it is not the function of the State Government to implement the Master Plan.

“According to the Government of India it is not the implementing agency and this Court noted that the Government of India had taken a somersault in this regard. According to other statutory authorities in Delhi, they too avoided shouldering any responsibility for inaction. Each of these authorities of the State was shifting their stands, as convenient, without any regard for statutory provisions and in blatant breach of the rule of law.

“This Court darkly hinted that in all this there was connivance with industry for extraneous considerations.”

The Court also said: “Accordingly, this Court felt it appropriate to appoint a Monitoring Committee to oversee and ensure compliance with the directions given by this Court in its decision of 7th May, 2004 with regard to industrial activity in residential or non-conforming areas in Delhi.”

This is a sad indictment of the powers-that-be and their lack of action regarding the Capital’s commercial establishments and the apex court’s warning for over a decade. The results are there for all to see.

Even as all hell broke loose, the centre immediately took up the issue to gain maximum political mileage.