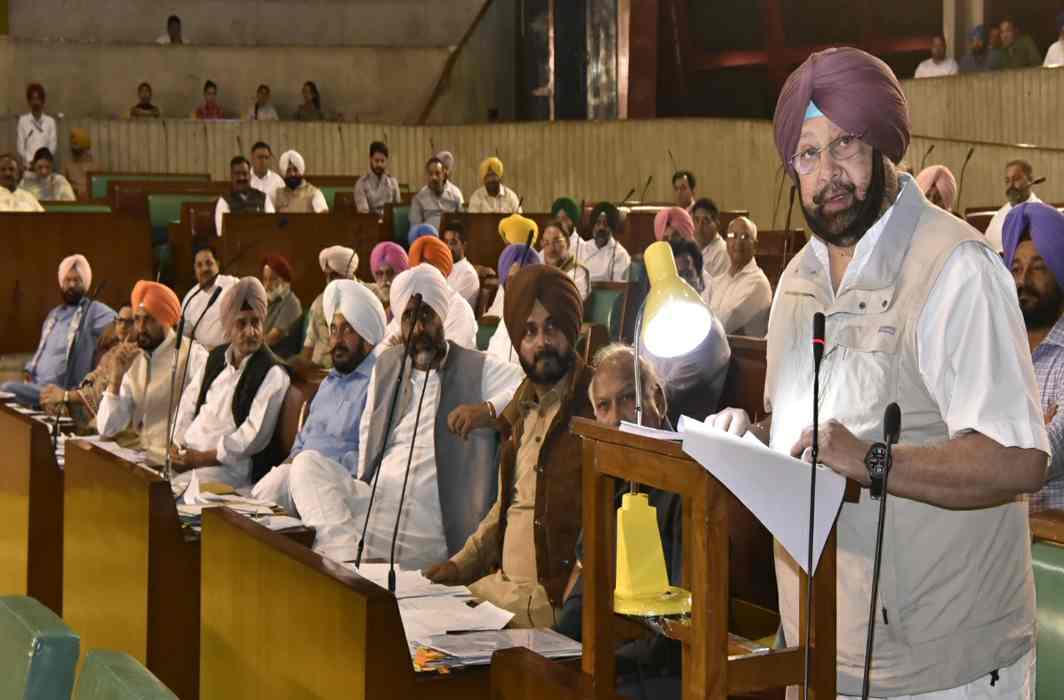 Above: Chief Minister Capt Amarinder Singh with his colleagues in the Punjab Vidhan Sabha/Photo: diprpunjab.gov.in

On the eve of elections to the assembly last year, then Punjab Congress president and chief ministerial candidate Capt Amarinder Singh was focused on one critical aspect which perhaps cost him and his party dear in the previous assembly polls in 2012 and helped the Shiromani Akali Dal-BJP alliance to retain power.

The crucial factor that broke the cycle of swapping of power in the state was an unchecked rebel one. In his confidence of being the “natural” successor to the previous government, Capt Amarinder cared two hoots for rebels and made no effort to placate them. However, last year, he not only made up for his aloofness but went out of the way to assure rebels who could not be given a party ticket that they would be “accommodated” in the government if he came to power. He subsequently led the party to victory, but appeared to suffer from “memory loss” as some rebels claim. For the last year-and-a-half, they had been waiting for their share of the pie but the chief minister gave them a rude shock now by approving amendments to the Punjab State Legislature (Prevention of Disqualification) Act, 1952.

As per the proposed amendment to Section 2 of the Act, a person shall not be disqualified for being a member of the Punjab assembly for holding any office of profit under the central or the state government like the “office of chairman, director or member (by whatever name called) of any statutory or non-statutory body other than any such body as is referred to in the clause”. It also made clear that the amendment would ensure that those categories already existing in the Act would not lead to disqualification. The proposed amendments are evidently aimed at protecting MLAs already drawing salary and perks from the government from disqualification in certain additional cases of “office of profit”.  The proposal includes incorporation of a new Section 1A to provide for the definitions of “compensatory allowance”, “statutory body” and “non-statutory body”. As per the amendment, the MLAs would be entitled to “compensatory allowance”, any conveyance allowance, house rent allowance and travelling allowance.

The idea behind the proposed amendment is to calm down the large number of party legislators who had been eying ministership or at least a post which would provide them pay and perks equivalent to that of ministers. The Congress had wrested power with 78 legislators in the 117-strong House. Under existing rules, only 10 percent of the assembly’s strength or 18 ministers, including the CM, could be included in the Punjab ministry.

Many hopeful MLAs had been keeping mum after the formation of the ministry, where a few vacancies were kept to be filled up later. However, after the ministry was expanded, the hopefuls were left discontented. To placate them, the government announced the amendments which will be brought in during the next session of the assembly.

The chief minister has again sought to calm the “hurt” feelings by claiming that he had never said he would not “accommodate” the other MLAs and assured others that their “interests” would also be looked after.

At the heart of the matter are attractive display of power and status, such as a beacon-mounted government vehicle, office, staff, pay and perks. In exceptional cases, the status of a cabinet minister was also conferred. Each of these posts provides for a tax-free pay of over Rs 1 lakh besides dearness allowance, constituency allowance, meetings allowance, travel allowance, medical allowance, free fuel, phone charges, and so on. They also get access to the corridors of power and jaunts. However, they cannot sign files or take decisions like cabinet or ministers of state.

The proposed amendments include incorporation of a new Section 1A to provide for the definitions of “compensatory allowance”, “statutory body” and “non-statutory body”. Additions have also been made to the categories of offices of profit under Section 2 of the Act. As per the proposed amendment, the MLAs would be entitled to “compensatory allowance” (not exceeding the amount of daily allowance to which an MLA is entitled under the Punjab Legislative Assembly (Salary and Allowances of Members) Act, 1942), “any conveyance allowance, house rent allowance or travelling allowance for the purpose of enabling him to recoup any expenditure incurred by him in performing the functions of that office”.

While Capt Singh would find it tough to handle the pressures from “sacrificing” non-MLAs, he does not face any real threat given the absolute majority he has and the continued weak position of rivals Akali Dal and AAP. As the next assembly elections are far away, he can find ways to please those left out.

The proposed amendments, approved by the cabinet, were prompted by the recent decision of the Election Commission to debar 20 Delhi AAP MLAs whose disqualification was subsequently stayed by the Delhi High Court. The amendment is necessary in view of the Punjab and Haryana High Court’s decision to quash the appointment of MLAs as chief parliamentary secretaries and parliamentary secretaries, which used to be equivalent to the status of cabinet ministers and ministers of state.

With the cap on the number of ministers any government can have, politicians are bound to look for new ways to please their favourites. As is evident, there is absolutely no need for such posts. The latest move would last till someone challenges the decision and the courts take a view on it. Till then, Capt Amarinder shall be looking at how to meet the “aspirations” of those left out.