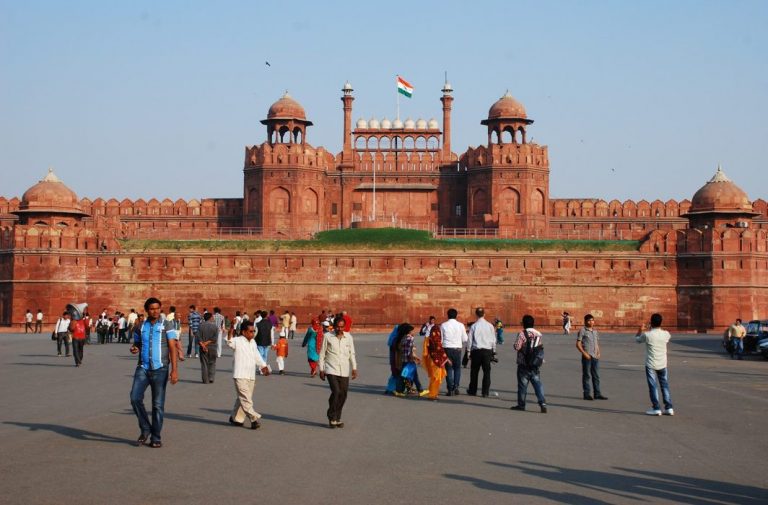 Above: The government has allowed Dalmia Bharat Ltd to maintain and develop tourist facilities at the Red Fort for five years

The government’s bid to get corporates to maintain various sites and let them make a financial killing in the process has conservationists up in arms. Is our valuable heritage up for sale?

The government’s scheme to involve corporate entities and individuals in the maintenance and upkeep of manmade and natural heritage structures and sites has come in for a lot of criticism. It has responded to criticism from the Con­gress by saying that this proposal was first mooted by one of its own ministers, Ambika Soni. Its response to criticism from conservationists, too, is the hackneyed: “Where were you during the last 70 years?” It also asks them why they did not protest when Humayun’s Tomb was given to the Aga Khan Trust. If the Congress never did anything right, and that is what we are constantly told, why is the present government implementing their schemes in such unseemly haste?

This is typical obfuscation because one must distinguish the cheese from the chalk. The Aga Khan Trust for Culture (AKTC) was and is doing a conservation project. Though many historians have protested against their idea of conservation, a distinction needs to be made here. The AKTC is not maintaining the place; it has taken up a conservation and restoration project and will leave once it is over. It has funded the project and so has the Dorabji Tata Trust. Neither is it into maintenance nor are they asking for placing their names on signage for brand recognition. Their name is only on the publications about conservation of the site and that is how civilised sponsors behave.

Coming to the issue at hand, the government has, for a consideration of  Rs 5 crore per year, allowed Dalmia Bharat Ltd to maintain and develop tourist facilities at the Red Fort for five years. Derek O’Brien, chairperson of the Parliamentary Standing Committee on Tourism, told reporters that the panel had not approved the ministry of tourism proposal for the adoption of the Red Fort by a corporate house. He is also reported to have said that the Committee had made several suggestions. One of them was that it wanted a vision document to come from the ministry after involving all the stakeholders. The MoU proposes that the vision document be prepared by the corporate sponsor.

O’Brien said the Committee was of the opinion that the scheme should be tried out as a pilot project at one or two sites to study its efficacy before it is launched. This proposal had, if reports appearing in the media are to be believed, been mooted by an MP of the ruling party, who is also a member of the Standing Committee. Going by parliamentary procedure, the report of the Committee has to be placed before both Houses of Parliament. One does not know if the report was tabled before the government went ahead and began implementation.

Reacting to the charge of undue haste, the minister in charge said to a TV channel that the government was in a hurry to show results. How can the need to show results be a justification for running roughshod over parliamentary procedure? The haste is such that the minister did not know how many people had bid for sponsorship of the Red Fort. He tried to cover up by saying that all these details are with the Committee and in any case, there are 93 monuments and sites up for adoption and he can’t be expected to remember the number of applicants for each site.

Supporters of the government, including former editors of mainline newspapers, are out in the field attacking the conservationists and defending the involvement of corporate houses. These conscientious objectors are at great pains to underline what they think are cardinal truths—governments can’t be expected to do everything and responsible citizens should be welcomed if they want to contribute to the preservation of heritage and culture. They also constantly remind us that internationally, corporates have been involved in preserving monuments and there should be no objection to them coming forward to do their mite for the country.

It might be instructive here to look at the conservation and restoration of the iconic Colosseum in Rome. Tod’s, a ma­jor Italian group known internationally for their luxury shoes, footwear and leather goods, came forward in response to an appeal by the minister of culture in the Italian government and invested $27.6 million to restore the 2,000-year-old structure. Tod’s name appears in brochures about the Coliseum and in material documenting the restoration. On-site signage is only about the Colosseum and not the benefactor. The guidelines for “Adopt a Heritage Project” and the MoU signed between Dalmia Bharat Ltd and the government mentions opportunities for brand promotion and “acknowledgement of contribution”. These can be found in paras 9 and 11 of the guidelines and paras 5 and 6 of the MoU of the “Monument Mitras”, euphemistically referred to as the Fourth Party at some places.

Para 8.6 begins by stating: “Fourth party agrees that during period of adoption no revenue shall be generated from the public as collection fee, convenience fee, etc. However, in case any fees are planned to be charged, it will be subjected to specific clearance of the relevant Government parties to the MoU.”

So what we have is a paltry sum of Rs 25 crore, shelled out at a trickle of Rs 5 crore per year for the right to have the brand of the “Friend of Heritage” (read Dalmia Bharat Ltd) emblazoned across signage both inside and outside the monument, in this case, the Red Fort. There is also the grateful acknowledgement of the contribution of the corporate house in preserving and maintaining this icon of India and the symbol of Delhi and of the struggle for freedom. There is also the very distinct possibility, as per the last sentence of para 8.6, of making some money from the venture. This is over and above getting free advertisements which reach at least 2.5 million visitors per year and the international prestige that would automatically accrue to anyone associated with the upkeep of a UNESCO World Heritage Site.

Before we begin to drag the critics of the scheme through mud, let us pause for a moment and compare the privileges that we are extending to Dalmia Bharat Ltd for spending $38,46,154 over a period of five years to those that Tod’s were given by the Italian government for spending $47.6 million over a period of 33 months. Those defending the deal are deliberately papering over a whole lot of other details. The deal was signed and delivered even as the Parliamentary Standing Committee was still discussing the report and had placed on record its objections. According to O’Brien: “Despite a government committee rejecting the idea (of adoption of Red Fort …Minutes of the meeting of the Oversight and Vision committee on ‘Adopt a Heritage’ project of the Ministry of Tourism, held on October 23, 2017, show that at least one bid was rejected by the ministry because of the sensitive nature of the Red Fort) and the parliamentary committee advising the government for a pilot to set the benchmark, the centre went ahead with its decision. The TMC just wants the government to put a stop to it.”

There is another aspect of the deal that needs consideration. The monies earned by the Red Fort for the government in 2014 were approximately Rs 6.15 crore. Figures accessed for those visiting the Red Fort during 2009-10 (Tourism Survey in the State of Delhi, Annual Final Report, Ministry of Tourism) show that a total of 24,17,688 Indians and 1,40,717 foreign tourists visited it during that period. (This would presumably be a count only of those who bought tickets as children below 15 years get free entry). If we assume that the same number visited the Red Fort in 2017-18, the income from sale of tickets to Indian visitors at the current fees of Rs 40 per head would have come to Rs 9,67,07,520 and to foreigners at Rs 500 per head to Rs 7,03,58,500. This would add up to Rs 16,70,66,020 or Rs 17.7 crore through sale of tickets alone.

Even if the government were to spend Rs 10 crore from this on the Red Fort over the next three years, won’t we have the same or better international-level facilities without being beholden to a corporate house and having signage such as “These public conveniences come to you with the best compliments of X Y and Z”? This is the kind of signage that every corporator, MP and MLA places in his constituency, reminding us that they are spending our money to provide us the facilities they were elected to provide.

Pay the Archaeological Survey of India staff from the coffers of the government and your ever-expanding resources and plough back the money from ticket sales into improving facilities at heritage sites and you won’t need to sign such shoddy MoUs with those who have no interest in heritage conservation. They only want to sell their cement and advertise it.

Preserving heritage is something we need to do because it is our heritage, it is what defines us. If we need to be compensated in terms of brand recognition for our little contribution and if our governments work as facilitators, it would be cheapening the icons of our freedom struggle. We would then be making a mockery of our heritage and one of the oldest civilisations in the world.

—The writer is a heritage enthusiast