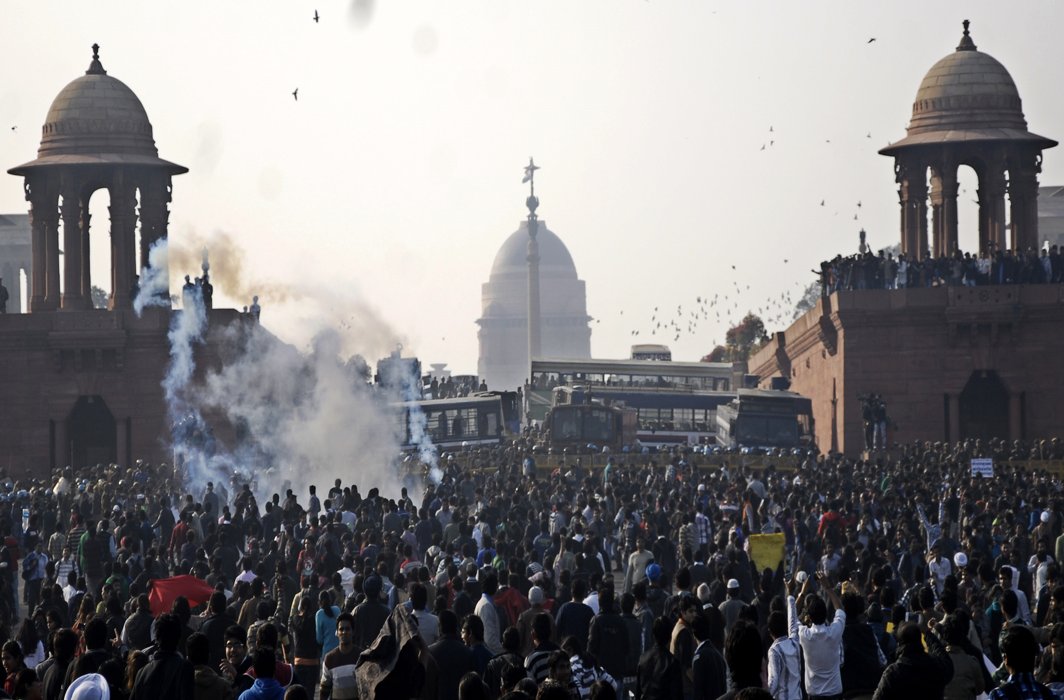 Above: The Nirbhaya rape incident led to angry demonstrations all over the country

As the apex court widens the scope of a petition seeking effective steps to contain sexual offences, the under-utilisation of the Nirbhaya Fund comes under scrutiny

It was a double whammy which the centre could well have avoided in the Supreme Court. On August 1, it suffered the ignominy of having to pay Rs 25,000 as fine for its failure to submit an affidavit in time before a bench which was monitoring its steps to prevent and compensate victims of sexual assault. The fine was to be deposited with the Supreme Court Legal Services Committee, as directed by the bench of Justices Madan B Lokur, Prafulla C Pant and Deepak Gupta. And when the centre did submit an affidavit, after paying up the fine, the Court found it guilty of non-application of mind and obfuscation in preparing it.

Although the centre retrieved the situation by agreeing to submit a better affidavit before the next date of hearing on October 4, the contents of its first affidavit left it vulnerable to criticism from civil society and the Court for the manner in which it dealt with the safety and security of women in the country. 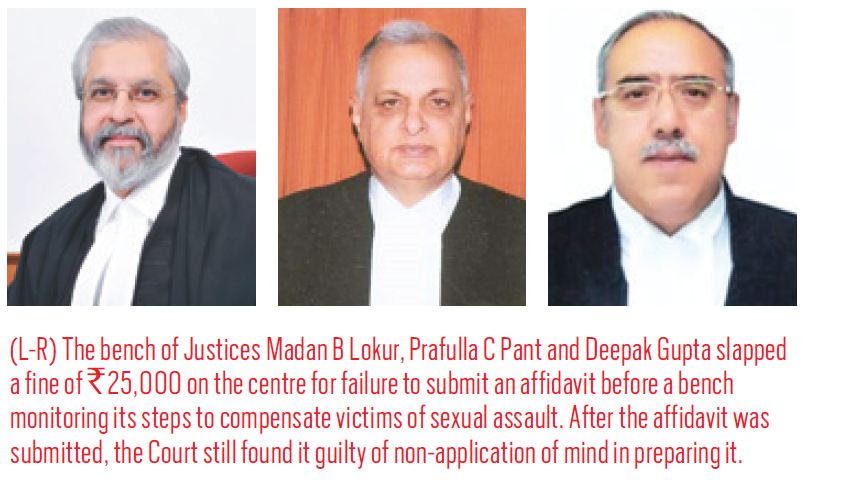 The case in which the centre’s hastily drawn affidavit exposed its lack of preparedness is Nipun Saxena v Union of India, being heard since 2013. Nipun Saxena, who had filed his petition as a law student, is now a young lawyer. He sought effective steps to ensure security for women in public places, the establishment of a Criminal Injuries Compensation Board and a ban on the two-finger test to check the virginity of rape survivors as it violates their dignity. Apart from the one filed by Saxena, the Court has tagged five other petitions, making similar prayers, to be heard together.

One of the shocking disclosures from the centre’s affidavit was that more than 90 percent of the Rs 3,100-crore “Nirbhaya Fund”, announced by the Union Ministry of Finance, following the Nirbhaya incident in Delhi in 2012, is yet to be utilised since 2015.

According to the affidavit, the centre has sanctioned just Rs 264 crore—8.5 percent of the earmarked funds—till August 2017.

The Ministry of Women and Child Development (MWCD) is the nodal ministry to appraise schemes under the Fund and also review and monitor the progress of sanctioned ones in conjunction with other ministries and departments. On October 26, 2015, an empowered committee of officers—an inter-ministerial committee—was constituted under the chairmanship of Secretary, MWCD, for appraising and approving various schemes/projects by the ministries/departments to be funded from it. Till July 21, the committee had appraised and recommended 22 proposals amounting to Rs 2,209.19 crore. These proposals of different ministries/ organisations are at various stages of implementation.

The MWCD initiated three schemes from the fund—“One Stop Centre”, Universalisation of Women Helpline and Mahila Police Volunteer. Popularly known as Sakhi Centres, the One Stop Centre scheme is being implemented across the country since April 1, 2015. It aims at establishing centres to provide first aid, medical help, police and legal assistance and counseling to women affected by violence. The scheme aimed to set up 186 such centres by July this year, even as the government claimed that 79 of them had become operational in February. 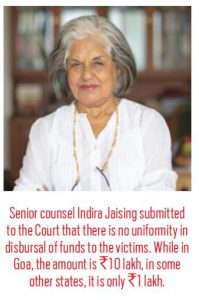 Although these schemes look fine on paper, the gap between them and their implementation made the Supreme Court express its displeasure on September 23. It said: “An unhappy state of affairs prevails on the issue since there is a lot of confusion in the absence of clarity on who is responsible for paying compensation to sexual assault victims, and at what stage it has to be paid.”

The bench of Justices Lokur and Deepak Gupta further observed that there is no system on how the funds have to be disbursed, how victims have to be compensated and at what stage the compensation has to be paid. The bench, it appears, clearly understood that there is a distinction between acceptance of proposals from different agencies and the actual sanctioning of amount for the purpose of implemen-tation, on which there has not been much progress.

For the setting up of One Stop Centres, for instance, the government has released just Rs 64.11 crore instead of the proposed Rs 120 crore.

Senior counsel, Indira Jaising, amicus curiae in the case, has submitted to the Court that there is no uniformity in disbursal of funds to the victims. She brought out the disparity by suggesting that in Goa, the amount is Rs 10 lakh, while in some other states, it is only Rs 1 lakh. The centre, she claimed, had transferred Rs 200 crore under the Nirbhaya scheme to each state, but there is no clarity on whether this was a one-time transfer or annual procedure.

The Supreme Court expressed its concern over the involvement of multiple agencies in the implementation of projects meant to be financed from the Nirbhaya Fund. Although MWCD is considered the nodal ministry for the management of the Fund, the empowered committee draws officials from other ministries because of various dimensions of the Fund. In the absence of coordination between them, it is likely to lead to confusion on who is involved and what is their responsibility.

The Supreme Court found the centre’s affidavit wanting in details such as state-wise number of victims of sexual assaults and the amount of compensation given to them. Besides disparities in the victims’ compensation schemes of state governments, the bench is also concerned with the absence of any provision for interim compensation to the victims in most states, absence of effective witness protection schemes, etc.

The Supreme Court’s orders, in this case, will hopefully translate into better results on the ground.