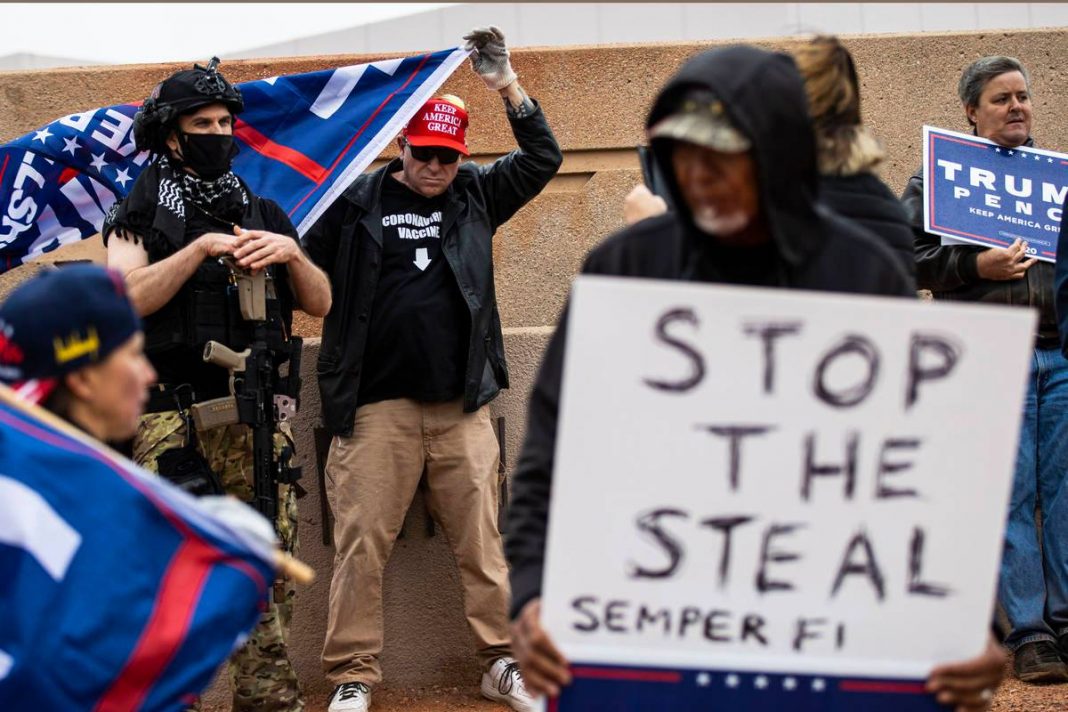 The US presidential election marks the resurgence of the American dream. But President Trump alleging “systematic” voter fraud even after the results were out is a constitutional disgrace. One hopes no further unbecoming conduct will mark the smooth transition of democratic power.

The US presidential election was described by Joe Biden as the “struggle for the soul of America”. This phrase captures the essence of (what Swedish economist and sociologist Gunnar Myrdal once called) the “American Tragedy”. It also needs deeper analysis not only because “the President represents the national interest”, as JFK said, but also on that incumbent “alone converge all the needs and aspirations of all parts of the country” and “all nations of the world….”.

There may be an anachronist imperialist ring about the last phrase, reeking of “manifest destiny”, but no one may ever doubt that the tumultuous election results mark the triumph of democratic traditions in the United States. This wounded civilisation (as VS Naipaul once termed India) is now a society marked by lynch-justice, violent institutional racism, pervasive xenophobia, deep-seated misogyny, discrimination against sexual minorities and political legitimation of the far right’s beliefs and practices of majoritarianism. And veteran activist-intellectual Noam Chomsky’s grave forebodings about the American democracy as narrated to Isaac Chotiner (of The New Yorker) were based on his view that “Donald Trump is the worst criminal in human history”. When we look at 2,30,000 plus Covid-19 deaths in America and the climate change denialism that the President has pursued with rare devotion, one cannot but agree with Chomsky.
Read US package
US Electoral College system: Antiquated and unnecessary
Biden-Harris victory: Return to reason
The authoritarian reflex: Donald Trump’s fight to the finish shows strongmen are still much loved

And yet, a nail-biting finish of the November 3 elections marks a return of hope and (as Joe Biden graciously said) an “end to demonization in politics”. Even so, while Biden has won by 290 votes in the Electoral College (as against Donald Trump who has obtained 217 seats), it is not insignificant that he still claims 47.5 percent votes against 50.7 percent of votes. The deep political divide among the people persists, and it is also reflected in the electoral returns to the Congress.

Nothing, however, justifies the President continuing to claim that the party he led won a great victory and to proclaim, without any threshold of evidence, that a “major fraud” had been caused to the “American people” who were being now disenfranchised. The President may not challenge the various dates by American states to announce the finalising of the results (for example, Arizona, November 30; Nevada, November 24; Michigan, November 30; Wisconsin,  December 30; and Pennsylvania where counties must certify by  November 23). He is also well within his rights, as must been done, to legally challenge any ballots illegally cast, as the local polling agents would have already done.

What is not open to any President is to decline the sway of the overwhelming constitutional convention of smooth transfer of power. The reiteration of mere allegations of fraudulent elections is a constitutional disgrace, as many a political party actor and commentator has rightly said.

One hopes that every incumbent of the White House will remember the special inscription on the original 1902 fireplace mantel (restored during Kennedy’s time) taken from a letter President John Adams wrote to his wife Abigail in 1800: “I pray Heaven to bestow the best of blessings on this House, and all that shall hereafter inhabit it. May none but honest and wise men rule under this roof.” This is a heavy, but not impractical motto, for all American Presidents.

Of course, there exists the right to interrogate the validity of every ballot and the right to ask for a recount and these will be fully availed of by both sides. The exercise of this right has, ever since Bush v. Gore (2000), been accentuated as “voting wars” by Richard L Hasen in The Voting Wars from Florida 2000 To the Next Election Meltdown (Yale, 2012). He has painstakingly noted the increasing judicial involvement and the explosion of election litigation; as he says “there’s much, much more of election litigation” notes than compared with times when he “started teaching election law in the 1990s” and when the “off-season for election disputes was all the time” low but now “it is hard to keep up with all the litigation filed every year … I track the court action on the Election Law Blog, and I’ve posted more than thirty thousand items since 2003”. The election dispute Bar in India may find the doubling of election disputes (from 100 to 240) too low a figure for a thriving democracy!

President Trump now has approached the Supreme Court. Exactly how many election disputes concerning the presidential election are pending before courts is somewhat hard to ascertain. One clear case of considerable importance is the Act passed by the Pennsylvania legislature which permitted voters the option to vote by mail, provided they did so by 8 pm on the election date, but the state Supreme Court agreed to uphold as valid all votes after that day and up to November 6 by 5 pm if the envelope bore the stamp of November 3.

The voting wars are so fierce in present elections that these do not even spare people with disability during the aggressive Covid-19 global pandemic. On October 11, 2020, SCOTUS in a 4:4 decision (Justices Clarence Thomas, Samuel Alito, Neil Gorsuch and Brett Kavanaugh) voted to grant a stay of a Pennsylvania Supreme Court decision providing that ballots will be counted if postmarked by November 3 and received within three days. Chief Justice John Roberts joined the Supreme Court’s three remaining liberal justices, Stephen Breyer, Sonia Sotomayor and Elena Kagan, who voted to let the decision stand since the Court found that the ban “violates the Americans with Disabilities Act (ADA) by forcing voters with disabilities, for whom Covid-19 is disproportionately likely to be fatal, to risk unnecessary exposure to the virus if they wish to vote in person”. Characterising that decision as “modest” and an act of “reasonable accommodation”, Justice Sonia Sotomayor wrote that it does not require all counties to adopt curbside voting, but rather “simply gives prepared counties the option to do so”. The District Court’s compromise “likewise does not risk creating voter confusion and consequent incentive to remain away from the polls” but “lifts burdensome requirements rather than imposing them”. The dissent also ruled that SCOTUS “should not substitute the District Court’s reasonable, record-based findings of fact with our own intuitions about the risks of traditional in-person voting during this pandemic or the ability of willing local officials to implement adequate curbside voting procedures”.

The move to expedite the hearing and to lift the stay has been denied, and the matter now will be decided post-election. But SCOTUS has left in place an extension of the deadline for the receipt of mail-in ballots to nine days after the election. Many have read future decisional portents in the concurring opinion of Justice Brett Kavanaugh, who warned that the Court might have to act to “avoid the chaos and suspicions of impropriety that can ensue if thousands of absentee ballots flow in after election day and potentially flip the results of an election.”  This suspicion is unworthy, given the fact that postal ballots have been a feature of American electoral landscape for long.

How will the Court decide on this matter is hard to say and all speculation on how the recently elevated Justice Amy Coney Barrett rule on merits must remain just that, despite still triumphant assertions by Donald Trump. Long ago, it was said that Justices do not decide cases by reading election returns, and SCOTUS must decide the electoral issues according to the prudent boundaries of constitutional law and jurisprudence.1

Voting, whether in person or by mail, was not free of human and social distress in Covid-19 times. Individual distress was made vivid before SCOTUS; as Justice Sotomayor poignantly recalls: “Plaintiff Howard Potter Jr., a Black man in his seventies with asthmaand  Parkinson’s  Disease,  told  the  District  Court: ‘[S]o many of my [ancestors] even died to vote.  And while I don’t mind dying to vote, I think we’re past that – we’re past that time’.”

One hopes for the good of the American people that these terrible times are truly forever past.

1Incidentally, I still commend a close reading of the analysis by Richard Funston,“The Supreme Court and Critical Elections”: The American Political Science Review,69: 3 795-81(1975).