In order to battle the challenges of the pandemic, Parliament must modernise, innovate and go virtual. Though debates will be devoid of the usual sound and fury, this is preferable to a parliamentary lockdown. By Devender Singh Aswal 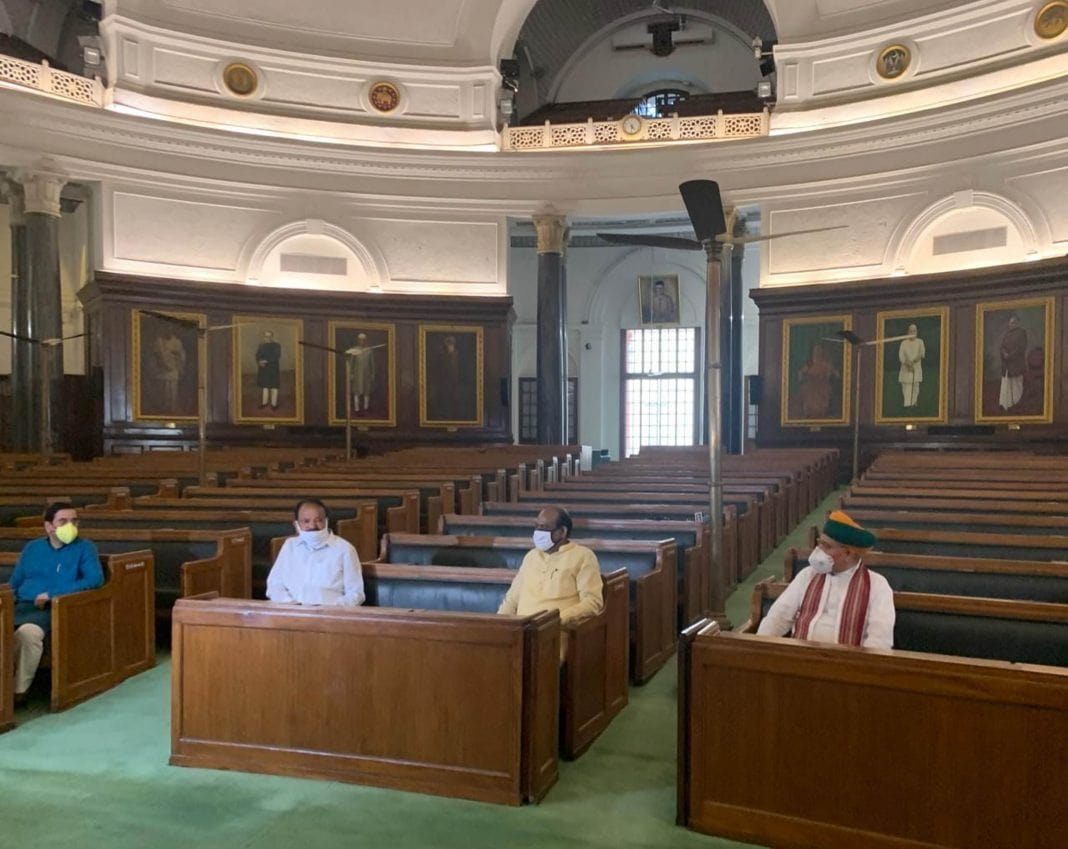 The corona pandemic has made traditional parliamentary proceedings hazardous. Parliaments around the world are adapting to the unprecedented health challenge thrown up by the spread of this deadly virus. Many Parliaments have become virtual or hybrid to facilitate remote participation by the members.

Though the Monsoon Session of our Parliament is nearly two months away, some members of the Opposition are demanding, and rightly so, virtual committee sittings as they meet more frequently during the recess. It is, therefore, an opportune time to go virtual or to begin with, to have a hybrid Parliament to enable MPs to carry out their constitutional duties during the pandemic or till the threat continues.

Making the Parliament of the largest democracy virtual and enabling MPs’ remote participation in an emergency situation ought to be a natural corollary of India’s digital architecture. The committees—hailed as “Parliament at work”—too need to have remote participation as they transact a great deal of business and exercise unremitting oversight over the government.

The European Union Parliament switched over to online voting from March 26. Britain’s House of Commons, a great stickler for its hoary customs and conventions, made history on April 21, 2020, by approving a new measure allowing some business to be done remotely. To begin with, up to 120 MPs could quiz ministers via Zoom, the video conferencing platform. Following the markings to stay six feet apart from one another in the chamber, some MPs will be allowed to physically attend it as part of a “hybrid approach”, said Speaker Lindsay Hoyle, which is “a first step toward a completely virtual Parliament”. Tynwald, the Parliament of The Isle of Man, a British protectorate and considered to be the oldest continuous Parliament, became virtual before the British House of Commons. The virtual sittings of the House of Commons, Canada, have also started as a means of securing government accountability to Parliament while limiting how often parliamentarians would have to attend it in person. Brazil, Spain, Norway and Finland have amended laws to allow remote sittings. Even tiny Maldives has started hosting remote plenary and committee sittings and New Zealand has set up a special parliamentary committee which, sitting remotely, conducts government scrutiny.

Although our Constitution, unlike the Australian one does not mention the place of assembly of MPs in session, yet the summons issued by the president under Clause (1) of Article 85 of the Constitution mentions New Delhi as the place of assembly and also the appointed date and time. Clause (3) of Article 100 provides: “Until Parliament by law otherwise provides, the quorum to constitute a meeting of either House of Parliament shall be one-tenth of the total number of members  of the House.”

This makes it unambiguously clear that MPs have to be physically present. Clause (1) of Article 118 empowers each House of Parliament to make rules for regulating, subject to the provisions of the Constitution, its procedure and conduct of business. The validity of the proceedings in Parliament cannot be called in question in a law court on the ground of any alleged irregularity of procedure [Art.122(1)].

In view of the explicit constitutional provision and the unbroken practice of holding the sittings of Parliament physically, it necessitates changes in the Rules of Procedure and Conduct of Business of both Houses to hold sittings in virtual or hybrid form. In a hybrid Parliament, as there will be a physical quorum satisfying the minimum constitutional requirement, the Constitution need not be amended except for a complete virtual Parliament. Requisite changes can be effected in the rules and suitable procedure devised by building consensus amongst leaders of political parties and groups, but the initiative for the virtually enabled Parliament has to come from the government.

When Parliament cannot assemble physically due to social distancing norm or lockdown, it must work differently, being the sentinel on the qui vive and the guardian of our democracy. Parliamentarians’ continued scrutiny and support is essential to maintaining public trust and confidence in the government’s pandemic strategy. The flaws and pitfalls can be revisited and course corrections made by the government when different—often discordant—voices from across the socio-political spectrum and geographical spread find resonance in Parliament. So the rules ought to be amended to enable the parliamentarians to conduct their core constitutional duties of holding the government to account, passing legislation (which will entail online voting or decision by each member) and performing their representational functions. This also calls for identifying and prioritising essential business during the crisis, leaving certain matters like private members’ business for the physical Parliament.

The Lok Sabha and the Rajya Sabha chambers are commodious enough to meet the requirement of quorum if members stay six feet apart from one another as per the distancing norm. Once the government and the benches opposite see eye to eye, technical and procedural changes can be thrashed out consensually. In fact, considerable work has already been done for an e-parliament. This was started by Somnath Chatterjee, former Lok Sabha Speaker, and pursued tenaciously by successive Speakers. Surely, our parliamentarians, an overwhelming majority of them, will welcome the virtual/hybrid Parliament, as a temporary measure enabling participation in the House/committee proceedings from remote locations. Hopefully, adversarial party politics will take a back seat in a time of national crisis and parliamentary scrutiny will help course correction where needed and inspire greater public confidence in the pandemic strategy of the government. Albeit public galleries would be deserted and debates devoid of the usual sound and fury and disruptions, yet a virtual parliament is preferable to parliamentary lockdown. There will be technical glitches and bumps along the way, but Parliament must modernise, innovate and go virtual to meet the new challenges. This will also further the goal of digital India and make our democracy more participatory, inclusive and transparent.

—The writer is Ex-Additional Secretary, Lok Sabha and is adviser to the HRD minister

The Madras High Court directed the Centre to not take any coercive action against the members of the Indian Broadcasting and Digital Foundation , Sun TV Network and other media platforms which are IBDF member under the IT Rules 2021.
Read more
Allahabad High Court

The Allahabad High Court has directed the SSP of Prayagraj to take a decision on a petition filed by a woman seeking protection of her life from her father and her brothers.
Read more
Courts

The Central Government has said it is not considering making the Law Commission a statutory body in an affidavit in the Supreme Court.
Read more
news

The bench of special NIA judge D.E. Kothalikar while dictating order said the court cannot lose site of the fact that there are serious allegations against Bhardwaj. She has shown apprehension of tampering of evidence. Considering the pros and cons of the matter, much leniency cannot be shown to her.
Read more
India Legal
Did you find apk for android? You can find new Free Android Games and apps.