A Menacing High: Illicit drugs have spread beyond Bollywood, metros to smaller towns

Drug abuse is not cool any more. It has become a dangerous and life destroying indulgence and young adults are being drawn into its vortex. The drug market in India has grown by 455% in the last three years and the Narcotics Control Bureau is fighting the menace with the NDPS Act. APN channel did an in-depth discussion on substance abuse and the NDPS Act on its special show India Legal. The show was moderated by the channel’s Editor-in-Chief, Rajshri Rai. 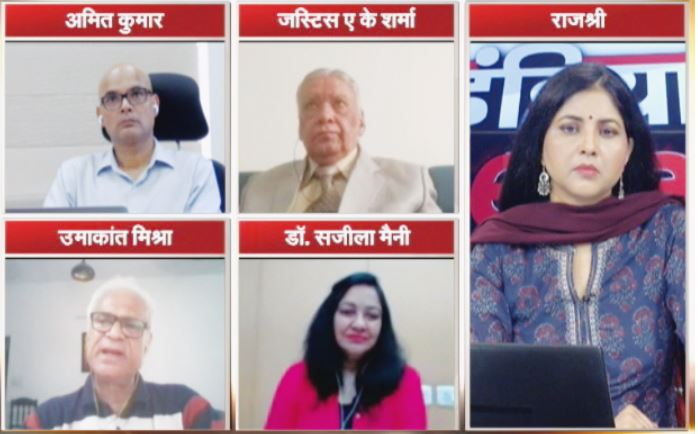 The Aryan Khan case has been grabbing the headlines for its legal pyrotechnics and star value. However, despite the legal cacophony, the seriousness of substance abuse has not been lost to many. Though the focus has been on Bollywood and the metros, in reality, the malaise of illicit drugs has spread its tentacles to smaller towns. Drug abuse and trafficking have increased exponentially since 2020 and various drug enforcement agencies, especially the Narcotics Control Bureau (NCB), are grappling with this scourge.

Cambodia, Thailand and Myanmar are crucial to drugs supply in India. India is a transit country; drugs pass from here and are also consumed in the process. Although we have 4,000 years’ tradition of drug consumption, it was more on a religious and cultural level. In the 1980s, the drug problem became serious and consumption too has steadily increased. Drug trafficking got a fillip due to international reasons too.

Bumper harvests in Afghanistan also gave rise to drug trafficking and consumption.” While arrests of high-profile alleged drug abusers and recovery of “small quantities” of drugs are a good exercise for the NCB, the question remains whether the law has been successful in stamping out drug peddlers and rehabilitating addicts.

Justice AK Sharma, former judge of the Madhya Pradesh High Court, said: “When the Narcotic Drugs and Psychotropic Substances (NDPS) Act, 1985, was promulgated, it was felt that the drug menace would get controlled. But the law was quite technical and officers of the NCB found it hard to understand it. There was a web of formalities as well. This made the working of the NDPS Act on the ground non-efficient. Now with training and orientation of officers, the situation has improved. Technical formalities are being followed and the implementation has become fairly good. Another problem is that the end-users get caught, while the suppliers escape the net of law. The end-users should always tell the authorities about suppliers and get them nabbed. An eye should also be kept on groups who influence drug abuse.”

Dr Sajeela Maini, Senior Consultant for De-addiction, Sir Ganga Ram Hospital, has been handling drug abuse cases of children as well as adults. She said: “A worrisome trend is that children as young as 10 years are getting entangled in drugs. In this regard, parents need to be alert for tell-tale signs. Both alcohol and usage are on the rise. Children first consume cigarettes and then move on to drugs. The child often behaves strangely, he becomes aggressive, has red eyes, spends more time alone in rooms and washrooms. Parents should watch out for these signs.”

Once a drug abuser gets arrested, another set of problems arise for him. He is slapped with charges under the NDPS Act and then begins the legal battle for bail, which is often exceedingly difficult to get.

Amit Kumar, Advocate General, Meghalaya, is an expert on NDPS matters. He said: “Users get arrested more than suppliers. This is because the drug business runs like a pyramid. Users are more than suppliers and manufacturers even less. So, the police catches the user more often and in larger numbers. He should be interrogated to know the manufacturer-supplier link and the racket be busted. Under Section 37, bail conditions are stringent. A liberal approach in matters related to NDPS is not encouraged. To decide bail, it is necessary to take on record the arguments of the public prosecutor. Without it, no bail decision can be made. Under Section 37(2), the accused is considered guilty till proven innocent. This is reverse to the settled assumptions of the general law code. These injunctions of law cover consumers, suppliers and manufacturers. As the consumer is the victim, leniency is needed. The maximum punishment for the consumer is one year, so the court should liberally grant bail to persons consuming drugs. Pre-trial punishment in the form of a prolonged judicial custody or jail is not correct in law.”

From cannabis, cocaine and heroin to synthetic drugs, consumption has increased manifold in India in recent years. So has the conviction in drug-related crimes. Data shows an 11% increase in drug conviction rates since 2016.

Umakant Mishra said: “Drug consumption is increasing as more and more drugs are finding its way in India. The recent haul of around 3,000 kg of heroin from a container at Mundra port in Gujarat is a case in the point. Now realising the sensitivity of the case, the National Investigation Agency is doing a probe. Recently, there have been many such drug seizures. These show how drugs are funnelled via India or into India. This has spiked drug consumption. Rave parties are symptomatic of this phenomenon. People caught should be thoroughly questioned to unearth the drug supply chain and consumer and peddlers should be penalised. The existing quanta of punishment for consumption is a minimum of six months and a maximum of one year. This was not the case when the law came in force. Initially, the minimum punishment under the NDPS Act was five years, irrespective of the amount seized. This was later changed. The law is evolving since 1985 and has been amended thrice. With every amendment, there is some improvement. It is not that the addict is getting a raw deal. At two levels, he gets benefitted. There is a provision that after trial, the judge can send the accused to a drug rehabilitation facility instead of jail. This is immunity from prosecution.”

Another problem that negatively impacts the NDPS legislation is the absence of distinction between a consumer and an addict. The existing definition of an addict is neither medical nor legal. During the discussion of the Bill in 1985, the words “consumer” and “addict” were used interchangeably. This has persisted and this grey area has now created a legal loophole.

However, Maini disagrees. “Crime and addiction go hand in hand in many cases. An addict turns supplier when he runs short of money. We should catch the peddlers and suppliers to get to the root of the supply chain. The punishment of one year is also too less. A stronger deterrent is needed.’’

WhatsApp chats have now become fashionable as material evidence. When can these chats be held as a valid piece of evidence? Can law enforcement agencies charge a person on the basis of electronic evidence?

Amit Kumar said: “If on the basis of WhatsApp chats drug consumption, procurement or sale/purchase is confirmed, then under Section 27 of the Evidence Act, punishment may be given. The consumer-peddler category is a grey area. If a peddler gets caught with sufficient proof, then he won’t come under the six-month-to-one-year punishment bracket. There is a provision for 10 years’ jail term as well. If a person is caught with commercial quantities of drugs, then he attracts harsher punishment.”

Under the NDPS Act, statements taken in custody are used by investigating agencies to bolster their case and intimidate people since they were held as admissible evidence. Fortunately, in Toofan Singh’s case, the Supreme Court held that these statements were not admissible. As a result, a large number of accused have been released on bail.

What propels a young adult into the murky and deadly world of drug abuse? How does his personality change after he starts taking drugs? Dr Maini said: “The desire for adventure and experimentation leads him on and on into the murky and lethal world of substance abuse. Talking of rave parties, they are the hot­beds of drug consumption. Drugs are readily available here. The youngster takes drugs first as an experimentation and due to peer pressure as well. When he first starts taking drugs, he cuts himself off from his near and dear ones. He becomes aloof. However, this is an effect. When someone is diagnosed as a drug addict or even as a beginner of drug abuse, he is given treatment at two levels. First, he is counselled and then medications are administered. So, it is the mind-body complex that is treated. It is not very difficult to kick the habit; it takes 7 to 10 days and the withdrawal symptoms wane off in a short period of time.”

The deterrent and the reformative aspects of the NDPS law have been a moot point right from its formative stages. Even now, the law has not been properly internalised. Judges, seemingly uninformed about the larger objectives of the legislation, don’t weave rehabilitation into their judgments.

Justice Sharma admitted: “Rehabilitation should be considered at the judgment level. The accused who want to opt for drug de-addiction should be guided towards rehabilitation and there should be a consequent relaxation in jail term as well. Private rehabilitation clinics are expensive. The government should open treatment centres and fund them properly.”

When the NDPS Act was put in force, there was no provision of rehabilitation. The law was later amended for it. But the rehabilitation clause has not been successful at the ground level. “There is a problem of where to keep the accused, in this case, the drug addict. At the district level, some drug treatment centres should be established. Drug treatment is not possible in jail where other inmates are present. But now social organisations are coming to the fore and taking initiatives for drug addicts’ rehabilitation.”

Cases like that of Aryan Khan are warning signals of the epidemic proportions that substance abuse may finally take. The case is also a barometer of inherent legal inconsistencies and failings of the NDPS Act. On both fronts, proactive and corrective action is the need of the hour.