Ending China’s days of expansionism with the Quad 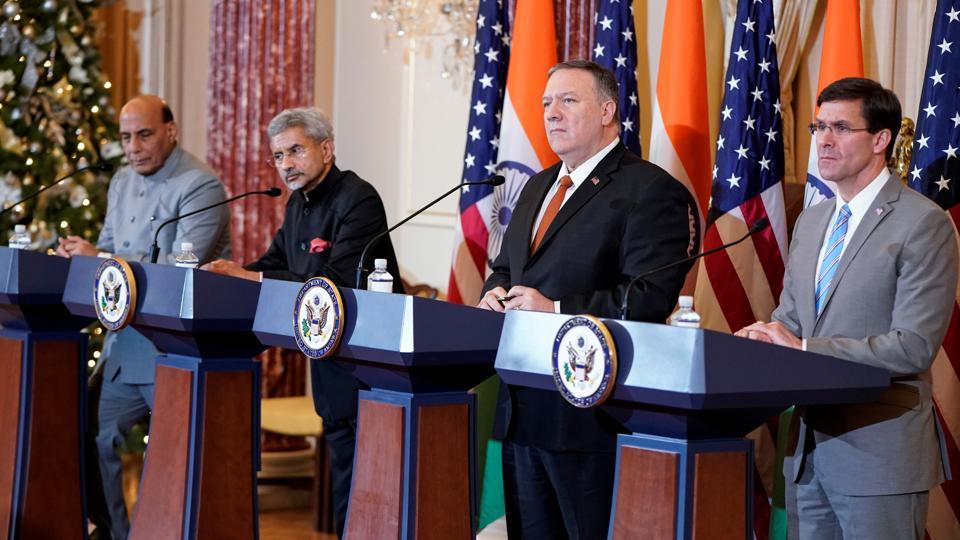 Coordination between the US and other members of the Quad group is aimed at sending a firm message to China that its aggressive expansionism in the Indo-Pacific region Ladakh, the Indian Ocean and the Pacific is coming to an end.

The world is witnessing a new phenomenon the rise of an aggressive China thirsting for land and sea territories in the nations surrounding it and creating a zone of hostility. These hostile activities extend from the South China Sea, Sea of Japan, the sea around Taiwan and a large number of island territories. Besides, China is also manipulating to take over various ports and harbour facilities from Hambantota in Sri Lanka to Gwadar in Pakistan as well as in the Maldives, Myanmar and Bangladesh right up to Djibouti in Sudan. Along with this is the constant struggle with India since 1959 to claim thousands of sq km of territory in Ladakh and northeast India in Arunachal Pradesh.

The Sino-Indian border dispute between the two countries has been going on right from the days of the clash between the Sikh forces of Maharaja Ranjit Singh and the combined forces of the British and China, and later, China-Tibet combined. The conflict in this area is mainly centred around the sovereignty of two strategically important areas, namely Aksai Chin, claimed by China as a part of the Xinjiang-Uyghur Autonomous Region in Northwest China, and the Tibet Autonomous Region, claimed by India as part of the Union Territory of Ladakh. The second disputed territory is south of the famous McMahon Line, earlier known as NEFA, and now Arunachal Pradesh.

The 1962 Sino-Indian war was fought in both these disputed areas. This was followed by a brief clash in 1967 in Sikkim’s Nathu La sector, followed by a clash in Sumdrong Chong in 1987 and in 2013 over different perceptions of the Line of Actual Control (LAC) which eventually deescalated. This was followed in 2017 by the Doklam incident in the Bhutan controlled area on the Sino-Bhutan border. These conflicts did result in brawls of a serious nature which led us to the most recent one at Galwan, where 20 Indian soldiers and, reportedly, over 121 Chinese soldiers lost their lives.

The Chinese have since April 2020 continued intruding into the area controlled by India especially on the west bank of the Galwan river. These have been interspersed by Corps Commander level meetings at Moldo and Chushul, where eight such meetings have taken place. China and India got into a serious clash over the northern shore of Pangong Tso lake, called the finger area, where India is being denied patrolling beyond Finger 4. Besides, China has been busy occupying the tactically important heights specially in Depsang to be in control of action around the most strategically important Daulat Beg Oldie airstrip and the Karakoram Highway.

However, the real turning point came on the night of August 28-29 when the Indian Army’s SFF soldiers of Tibetan origin in a surprise operation, occupied seven crucial heights south of Pangong Tso on the shore of another small lake called Spangur. The total result is that the Indian armed forces have got tactical heights on the Kailash sector as one looks from the south bank of Pangong Tso to Tsaka La.

This means control of the crucial heights like Gurung Hill, Magar Hill, Black Top, Helmet Top, Rezang La Mukhpari and Rechin La. What is of importance is that all these heights are on the Indian side of the LAC and were the scene of intense battles in 1962. China accepts that the alignment of the LAC is correct in these areas except in the case of Black Top, which it says is east of its claim line. China has also ignored all agreements with India and falls back on its 1959 position, which suggests that it is looking for an open confrontation with India.

As has been seen down the ages, whenever a group of nations shares a common international zone like a sea, ocean or lakes, and even rivers, a single country, more often than not, keeps its own interest above that of neighbouring countries in the region, be it in common passages for shipping, sharing common bounties of the region, such as fishery or oil or exploration of minerals or a host of other such interests. This situation invariably leads to a constant state of conflict as is evident in the South China Sea.

Countries such as Malaysia, Brunei, Philippines, Taiwan, Vietnam and even Indonesia and Thailand have objected to China claiming practically all of the South China Sea. US Secretary of State Mike Pompeo has categorically stated: “China’s pursuit of offshore resources in parts of the South China Sea is completely unlawful.” Further, the US has condemned Beijing’s bullying tactics to control international energy rich waters for its own gains and also creating artificial islands for military purposes, directly challenging the overall interests of the US.

The main problem amongst the countries around the South China Sea in the dispute over territory and sovereignty over the ocean areas are the two chains of islands, namely, Paracel and the Spratly Chains. Along the islands, there are a dozen rocky outcrops, atolls, sandbanks and reefs like the famous Scarborough Shoal which are being claimed by others.

Read Also: How the school and college education change after National Education Policy 2020

The islands are not only located to give strategic military advantage against enemy shipping or aerial activity via submarine pens, harbours, runways or missile bases, but are extremely rich in natural resources. It must be appreciated that an island becomes part of the land territory of a country. Hence the sea border of 12 nautical miles and EEZ starts from the island deep in the sea, thus giving a very large strategic advantage to a country controlling the islands.

China’s claim is perhaps the most forceful amongst the South China Sea countries. It claims an area defined by the 9 Dash line, which, on the map, stretches hundreds of miles south and east of China’s southern most province of Hainan. The dispute was taken to the Inter­national Court in Hague, which rejected the claims of China in very clear terms.

China`s claim to Spratly and Paracel islands is challenged by Vietnam, which says that China has only started staking the claim after the late 1940s, while it has papers to prove it belonged to Vietnam from early 17th century onwards.

America is absolutely clear that China would like to control the entire South China Sea, as over 70 percent of its trade passes through the Malacca Strait and over 80 percent of its oil comes from the Gulf through this route. Any hostility by China against shipping would affect its economy very adversely.

Moreover, billions of dollars have been invested by China in various trade routes and OBOR projects like the CPEC in the PoK region close to Western Ladakh. China wants to be in control of the important sea route and lanes, especially in the South China Sea.

The atmosphere of hostility against Chinese bullying tactics by most of these countries is bolstered by the fact that they are fully supported by the US, the UK and France. The moral support of these powers is not limited to papers or media. Both the US and the UK have sent warships and aircraft carriers to the region along with supporting ships and submarines.

After the Chinese claim of an island close to Papua New Guinea and its attempt to militarise it, leading countries of the Indo-Pacific region, namely Japan and Australia along with India and led by the US, have decided to give a strategic mandate to the Quad group already formed by them. The recent meeting of the Quad in Tokyo clearly spelt out their intention to put a stop to the expansionist tendencies of China.

America has not only spelt out its stand against China, but also convinced the other three member countries of the Quad to modify their respective foreign policies to counter China, somewhat in a similar manner as NATO stood against the Soviet led Warsaw pact countries.

Hence, it is quite clear that Quad is an informal strategic forum. It was initially formed with a host of programmes covering humanitarian and disaster relief as well as anti-terrorist activities, but with the Chinese threat looming in the South China Sea, Australia has been brought in as a partner along with joint military operations and joint training and logistic operations.

This has led to 2+2 meetings between the member countries of the Quad. The coming 2+2 ministerial dialogue this month between India and US would call for heads of defence and external affairs ministries from the two countries to meet. This would be the format with all the other countries. Needless to say, it is now quite clear that the countries realise that foreign affairs must include the military aspect.

A number of joint naval and air exercises have been undertaken by regional countries not only amongst themselves, but also with other powers specially the US and the UK. The aim is to practise inter-operability of fighting equipment and manpower against a common enemy along with joint tactics and cooperation to meet a common military goal. The most recent one was conducted on October 19 between the US, Japan and Australia in the South China Sea. The main idea is to have a free and open Indo-Pacific zone.

The most important of these is the Malabar Naval Exercise. It started in 1992 between the US and India, and included Japan in 2015. Now from 2020 onwards, Australia has been included to become truly a Quad exercise. These exercises practise all aspects of naval and air operations, including landing operations by armies via landing craft. The aim is to send a firm message to China, that its days of expansionism are coming to an end.

The Jammu & Kashmir and Ladakh High Court on Monday held that without actually exhausting the remedy of filing of pre-arrest bail application before the court of first instance, one can't invoke the High Court's jurisdiction unless there are compelling and exceptional circumstances.
Read more
Courts

It is observed by the Madhya Pradesh High Court that for the petitioner, admitted in June 2015, the 5 years period expired in June 2020 but he couldn't clear all the papers. The University has withheld the result and has come out with a response that he cannot now be permitted to complete the course.
Read more
India Legal
Did you find apk for android? You can find new Free Android Games and apps.