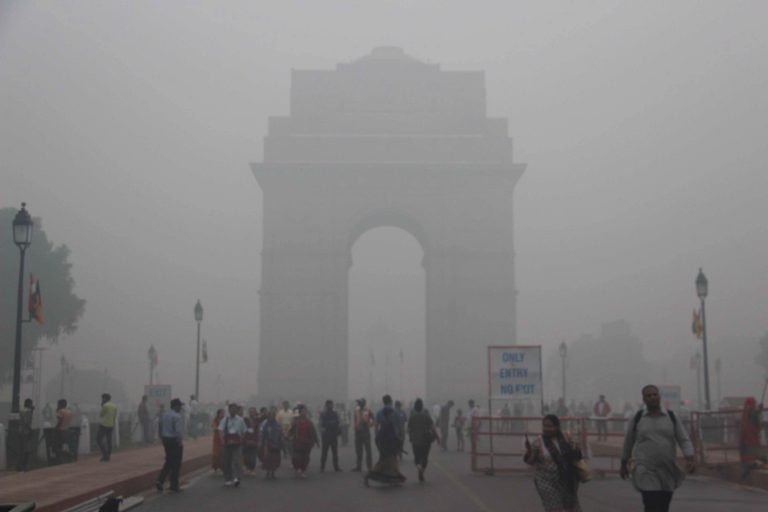 Above: Haze near India Gate that poses a major health risk/Photo: UNI

Delhi and its adjoining areas are facing an unprecedented crisis as pollution levels spiked to dangerous levels for days together, forcing the Supreme Court to intervene and summon officials from three states. Is there a way out?

In October 28, 2019, the morning following Diwali, PM 2.5 levels in Delhi-NCR breached the uppermost level of all existing measuring scales. If you were in Delhi-NCR in the week of October 28 to November 4, you were inhaling smoke from the equivalent of 44-55 cigarettes every day. Delhi is notorious for its reputation of turning into a gas chamber every year around this time, as pollution spikes to alarming levels.

How is it that the collective governments of Delhi, the NCR states and the central government are unable to tackle this crisis year after year? The crisis was so serious that the Supreme Court called for an emergency meeting on November 4, after PM 2.5 levels refused to come down from severe plus levels in 114 hours. “We are at a loss to understand why we are not able to create a situation in which this kind of pollution does not take place, that too in a routine manner every year,” questioned the bench, headed by Justices Arun Mishra and  Deepak Gupta.

The Supreme Court called the inaction of state governments and the government and agencies of Delhi a “blatant violation” of the right to life of a sizeable population. The bench, in its order, stated that the governments of Delhi and the NCR states and agencies have disregarded the orders of this court and other courts. The bench attempted to fix the accountability for the states’ failure to curb farm residue-burning that contributes heavily to this emergency. Stating that the situation is destroying the right to life in gross violation of Article 21 of the Constitution of India, the Court threatened to charge the entire administration, including the police staff, collectors, panchayats, chief secretary as well as those doing it, in case of any stubble burning incidents.

Appalled at the air quality levels and the failure to manage the escalating PM levels, the Supreme Court bench summoned the chief secretaries of three states—Punjab, Haryana and Delhi—to be present before the court on November 6.  The Court further asked for an explanation from the officials of Punjab, Haryana and Uttar Pradesh why they should not be fined for their inability to stop the stubble burning that’s threatening the health of millions of people. The Court went a step further by ordering the sarpanches and police authorities to prepare a list of incumbents who burnt stubble on their farms.

Due to a favourable wind speed and the late monsoon, Delhi had a reasonably pollution-free September and most of October. As the wind speed dropped and the farm fires in neighbouring Punjab, Haryana and Uttar Pradesh started, Delhi began to choke. By October 26, 7 pm, the PM 2.5 levels across Delhi ranged between 316-348, already in the poor category. The combination of low wind speed, farm fires and Diwali firecrackers took the PM 2.5 levels to unprecedented numbers.

The week saw no respite as Delhi-NCR experienced the worst air quality of the season. For the first time, a public health hazard was declared, and an advisory issued to the people. The Delhi chief minister made an appeal to the chief ministers of Punjab and Haryana to discuss how to ensure that stubble burning stops. The odd-even scheme had already been announced by the Delhi government in anticipation of the air quality crisis. The alarming levels of PM 2.5 triggered a public protest, as people demanded government action instead of the ongoing blamegame.

“Protests clearly displayed the sort of anger, frustration and pent-up regret that the citizenry has towards the ruling class and their lack of will to address one of the worst issues modern India is facing today. We are fooled and will be fooled no more!” said Bhavreen Kandhari, one of the organisers of the protest. Nearly 1,500 people turned up at India Gate on November 4 to demand that the government act on a priority footing to tackle the crisis.

In 2017, the central government notified the Graded Response Action Plan (GRAP). These emergency measures kick in—typically during this season—to tackle the issue of rising pollution. The GRAP includes a number of measures, including a complete ban on construction activities, checking road dust through sprinklers, open garbage dumping, garbage burning, and so on. The odd-even carload rationing is an action under the GRAP, the impacts of which are still being debated. Despite these notifications and a forecast by the Indian Meteorological Department about the change in wind speed, Delhiites watched in horror as the smoke and the related health impacts engulfed them.

Vivek Chattopadhyaya, manager of the Clean Air programme with Centre for Science and Environment (CSE), a Delhi-based NGO which has been crusading for the right to clean air for three decades, says: “It is not just Delhi, many other cities in North India also face similar or even higher episodic pollution during winter. For sustained reduction in emissions more intense and long-term action is needed.”

Preparedness to deal with episodic events will require action on all fronts. For instance, public transport, particularly bus services and last-mile connectivity, parking and congestion issues, proper networking of all the modes of transport involved, promoting walking and cycling by providing safe infrastructure, and so on. Similarly, diesel genset usage must be curtailed with more use of renewable sources and adequate power supply.

Diwali was the big culprit this time. The Supreme Court in 2018 had ordered a conditional ban on crackers and allowed only low-emission crackers or “green crackers” to be sold.

Shops in Delhi, however, also had stocks of regular crackers, which were sold “under the table”.

“I am sceptical about the new crackers being green. Some regular crackers were still available and at a much lower cost, my family bought the cheaper ones,” said Pahi Mehra, a resident of Janakpuri. Though she herself abstained from lighting any fireworks, nothing stopped her friends and family.

On its part, the apex court pulled up the government representatives for failing so miserably to prevent the public health crisis.

On November 6, the court directed the chief secretaries of Punjab, Haryana, Uttar Pradesh and Delhi to release the agreed incentives to farmers who did not burn their crop remains.

Refusing to accept lack of funds as a reason, the court ordered that the interests of small and marginal farmers be protected and they be provided harvesting machines which they cannot afford. The bench directed the ministry of agriculture, ministry of environment and forests and the states of Punjab, Haryana and Uttar Pradesh and the government of Delhi to prepare a comprehensive scheme to take care of environmental issues.

Delhi officials were pulled up for inability to tackle road dust, open garbage dumping and burning, and unpaved roads. They assured the court that most of the issues would be taken care of within seven days.

Breathing polluted air has now been proven to have negative effects, leading to asthma, cancer and even death. Even though the deteriorating air quality has made headlines, and the judiciary has in all earnestness stepped in, India does not fare well when it comes to tackling it.

It is important that the public also plays its role in helping the authorities. “They have to be more vigilant regarding violations happening in their neighbourhoods (like garbage burning, industrial emissions from illegal units, and so on), be more aware about their rights regarding having safe/better walking and public spaces, and about maintaining vehicles properly so that they emit less smoke, and using public transport as much as possible,” advised Chattopadhyaya.

All these measures will collectively help in defeating this deadly monster, which is becoming an annual threat.