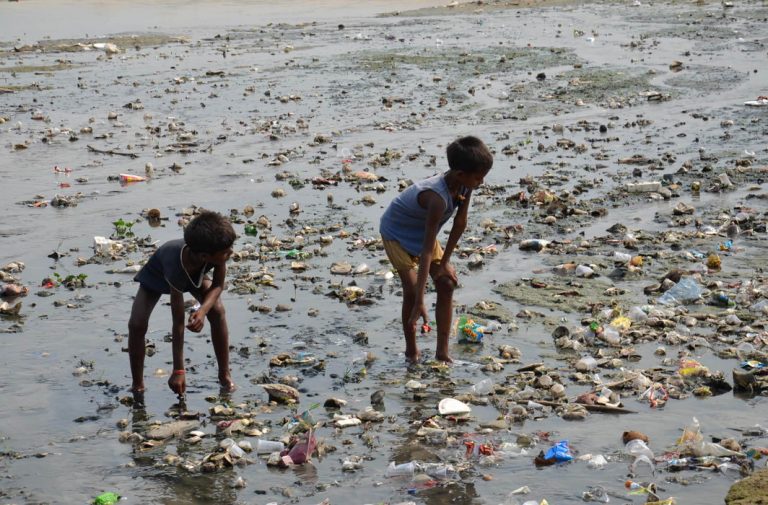 Above: Solid waste and other filth thrown into the Ganga following the Kumbh Mela/Photo: UNI

First the praise and now the brickbats. In February this year as the Kumbh was under way, Prime Minister Narendra Modi had praised the efforts of the sanitation staff in keeping the Mela clean, claiming he had never seen a cleaner Ganga. This Kumbh was touted as the cleanest ever with the government installing over 1.2 lakh eco-friendly toilets and deploying 1,500 volunteers to monitor cleanliness. Despite all these efforts, Prayagraj was left in so shoddy a state from the solid waste that had accumulated there that there was fear of an epidemic breaking out after the 53-day-long event that concluded last month.

This scary scenario was etched out by a committee headed by Justice Arun Tandon and appointed by the National Green Tribunal (NGT) to see that the Ganga did not get polluted further during the Kumbh Mela.

Based on the committee’s report, the NGT has now directed the UP chief secretary to ensure proper disposal of this waste with immediate effect and chalk out clear responsibilities of the officers who will be answerable in this regard.

The NGT said that the situation in the area was worrisome and if the current conditions continued, an epidemic was likely to spread. A bench headed by NGT chairman Justice Adarsh Kumar Goel said that the responsibility of waste disposal and accountability on this front has to be decided at the ground level.

According to Justice Tandon’s report, a huge number of toilets were constructed in different camps near Arale, situated next to the Ganga. However, the sewage going through the Rajapur sewage treatment plant (STP) was more than its capacity and it could treat only around 50 percent of it, while the rest was passing untreated into the river.

In addition, 60,000 metric tonnes (mt) of solid waste was collected at Baswar Solid Waste Treatment Plant and was lying untreated as the plant was not operational since September 2018. Of this, 18,000 mt were generated from the Kumbh. In addition, the Salori STP was not working satisfactorily and processing more than its capacity while the biochemical oxygen demand level had reached 47 mg per litre. During the Kumbh fair, the Tribunal had directed the Uttar Pradesh Pollution Control Board to monitor the environmental measures in Prayagraj, including spreading awareness amongst the public. The NGT report predicted a rise in cases of acute diarrhoea, enteric fever, viral hepatitis and cholera.

“Dirty water from toilets was being collected in kutcha pits. The base of the soak pits had not been lined and the dirty water could percolate underground,” the report said.

The Additional municipal commissioner of Prayagraj, Amrendra Verma,  said that a private firm, Hari Bhari, was entrusted with the task of processing solid waste at Baswar plant. “The municipal corporation is not directly responsible for disposal of solid waste as the private firm has been allotted a tender for the job. As the firm failed to do its work efficiently, a notice has been issued for completing the task at the earliest. Municipal Commissioner Ujjawal Kumar was directly monitoring waste disposal of the Kumbh Mela, but he is on leave and will be back after a couple of days,” he added.

The committee also found other violations of the NGT orders for preserving  rivers. Around 36 temporary ponds were dug on the banks of the Ganga. These had no lining and some of them still contain dirty water. The order also hit out at the Mela administration for being non-cooperative with the supervisory committee on several issues, including non-installation of public toilets on the banks of the Ganga.

The fact that the UP government has been continuously forewarned about its lack of environmental diligence and failure to adopt modern scientific practices can be highlighted with these incidences: