Farm bills in Rajya Sabha: Validity of proceedings beyond question despite uproar 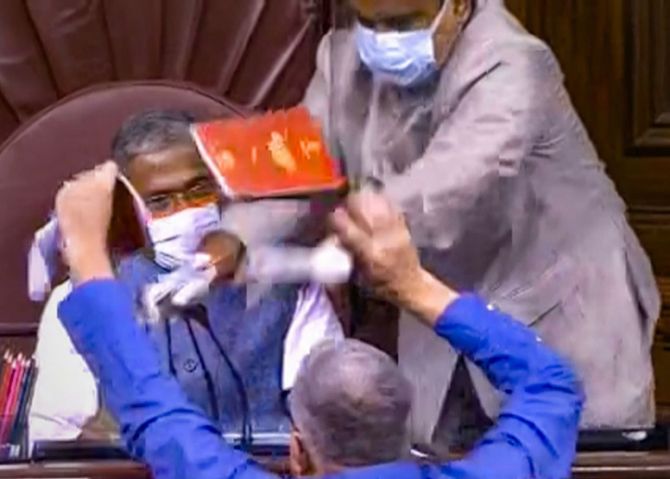 The passage of the Bills saw a notice of motion for the removal of the Deputy Chairman. But Article 122 says that the validity of any proceeding shall not be questioned for alleged irregularity of procedure.

The unruly and unseemly scenes witnessed in the Rajya Sabha on September 20, 2020, following the so-called “illegal” passage of the farm Bills, made even the Leader of the Opposition, Ghulam Nabi Azad, admit that it was the last straw that broke the camel’s back. The Bills, which amounted to signing the death warrant of farmers, saw tumultuous passage with MPs breaking microphones and standing on tables.

Harivansh Narayan Singh, Deputy Chairman, Rajya Sabha, rued the “disrobing of democracy” by these wanton acts and announced a 24-hour fast to atone for their sins. His “Gandhian” gesture of offering a cup of tea to the suspended members who were fasting and protesting in front of Gandhi’s statue inside the Parliament premises, went unreciprocated.

The Bills were the Farmers’ Produce Trade and Commerce (Promotion and Facilitation) Bill, 2020, and the Farmers (Empowerment and Protection) Agreement on Price Assurance and Farm Services Bill, 2020. The sequence of events on that fateful day was as follows.

The revised List of Business for the day catalogued Statutory Resolutions moved by the Opposition to the effect that the House disapproves the ordinances pro­mulgated by the President of India on June 5, 2020, in respect of these two Bills, as well as the Essential Commodities (Amendment) Ordinance, 2020, promulgated simultaneously. Alongside were listed the three corresponding Bills for consideration and passing.

The common parliamentary practice is to take up the Statutory Resolution and the Bill together for discussion. Accordingly, the record of the proceedings of the House show that the Chairman decided to take up the Statutory Resolutions and the respective Bills relating to the two legislations of the Ministry of Agriculture and Farmers Welfare together for consideration. After the moving of the Statutory Resolutions and the Bills, the Chairman invited members to move their amendments seeking to refer the two Bills to select committees of the Rajya Sabha. After doing so, discussion on all the matters relating to each Bill was taken up together.

The proceedings went smoothly with a large number of members speaking according to the time allotted to them, interspersed with the usual war of words and raising of points of order. In the end, the agriculture minister was invited to reply. In the course of his speech, the Deputy Chairman sought the permission of the House to extend its sitting till the disposal of the Bills. Some members, including Ghulam Nabi Azad, wanted the discussion to be carried over to the next day. The minister gamely continued and concluded his reply, amidst disturbances.

The Deputy Chairman then put the Statutory Resolution and the three amendments for reference of the first Bill to the select committee to a voice vote and decided that it had been negative. In view of the rising tempers and the Deputy Chairman advising certain members to resume their seats, the House was adjourned for 15 minutes. The motion moved by Narendra Singh Tomar for consideration of the Farmers’ Produce Trade and Commerce (Promotion and Facilitation) Bill, 2020, was then put to vote and adopted. Adoption of the same process, amidst interruptions, led to passing of the Farmers (Empowerment and Protection) Agreement on Price Assurance and Farm Services Bill, 2020. This, in short, is the parliamentary record of the proceedings.

But there was much song and dance on the Table by agitating members before that, who would not allow the proceedings to continue beyond the scheduled closing time, come what may. They wanted the vote to be taken, and if the Chair was not inclined to act as per their terms and conditions, he was free to vacate it (the “motion of no-confidence” against the Deputy Chairman).

The Chairman’s anguished observations from the chair on September 22 gave a befitting reply to the Opposition. He clarified that it was not correct to put the blame for extending the time of the sitting on the Chair.  It was done in order to accommodate those members whose names were proposed by their respective parties for participation in the debate and to allow the minister to reply.

“For the first time in the history of this august House, a notice of motion for removal of the Honourable Deputy Chairman has been given,” he said. It was rejected because it was a “motion” and not a “resolution” and was not given 14 days in advance, as mandated by Article 90 of the Constitution. Quoting Article 90, he said: The Deputy Chairman “(c) may be removed from his office by a resolution of the Council passed by a majority of all the then members of the Council: Provided that no resolution for the purpose of clause (c) shall be moved unless at least fourteen days’ notice has been given of the intention to move the resolution.” He added that it is only when the resolution is under the consideration of the House, then the person against whom it has been moved is not supposed to preside over the House.

As regards the members’ grouse regarding voting by “division” having not been done, the Chairman said: “Yes, Members have a right to ask for division on different occasions…  The proceedings say, thirteen times the Deputy Chairman said, ‘Please go to your seats; I will allow division.’ But they did not go back to their seats. Moreover, there have been number of instances when the House has passed the Bills without division in din, (although) it is not a healthy thing.” However, some newspapers accessed Rajya Sabha TV and reported that this was not true some of the MPs were in their seats.

Putting a motion or a Bill or any other proposal to vote through the device of division is a serious matter. It is a sacrosanct and elaborate process which kickstarts with the ringing of the quorum bell for three minutes in order to allow the members to take their seats and clear the lobbies. The step-by-step procedure detailed from Rules 252 to 254 of the Rules of Procedure and Conduct of Business Rules in the Council of States mandates taking the voice vote twice before the voting begins. This is done either by members rising in their places or going into the right (for “ayes”) and left (“noes”) lobbies or operating the automatic vote recorder system.

In view of the special seating arrangements across three locations on account of Covid-19 protocols, the conduct of voting through automatic vote recording system was dispensed with and replaced by distribution of Division Slips, for members to tick mark their choice of Yes or No. However, with members not in their seats, it was not possible to implement the “division” protocol. The Deputy Chairman, in his wisdom, decided to dispense with it and give his ruling based on the voice vote.

Read Also: The COVID effect: When Donald Trump got trumped

Protests have been mounted on various fronts, including a long march to Rashtrapati Bhavan to present a memorandum requesting the president not to give his assent to the Bills. They have, in effect, sought to challenge the decision of the Chair. Article 122 of the Constitution clearly states that the validity of any proceedings in Parliament shall not be called into question on the ground of any alleged irregularity of procedure.

In Syed TA Haqshbandi vs State of J&K, the Supreme Court observed: “Judicial review is permissible only to the extent of finding whether the process in reaching the decision has been observed correctly and not the decision itself.” In Pandit MSM Sharma vs Sri Krishna Sinha, the Supreme Court has stated that the validity of the proceedings inside the legislature of a state cannot be called into question on the allegation that the procedure laid down by the law had not been strictly followed. In Indira Nehru Gandhi vs Raj Narain, the Supreme Court unanimously declared that the validity of the diction law (Amendment) Act and the Constitution (Thirty ninth Amendment) Act, 1975, could not be challenged on the ground that they were passed when a number of MPs were under detention. In the case of Ramdas Athwale vs Union of India, the Court observed: “Under Article 122 (2), the decision of the Speaker in whom powers are vested to regulate the procedure and the Conduct of Business is final and binding on every Member of the House.”

A composite view of various judgments cited above would make it abundantly clear that the remedy sought will elude the aggrieved Opposition. If the law is not good for farmers, the matter will ultimately be decided at the hustings.

In the meanwhile, unlike Lord Krishna coming to the rescue of Draupadi in the Mahabharata, Parliament does not have a seemingly endless supply of clothing material to redrape Mother India from time to time. The UN recently declared September 15 as “International Day of Democracy”. Will it help?

Did you find apk for android? You can find new Free Android Games and apps.
Share
Facebook
Twitter
Pinterest
WhatsApp
Previous articleIndia’s TB treatment pioneer’s petition against WHO for mishandling Covid dismissed by Supreme Court
Next articleNew labour code on Social Security has not been able to address overlapping definitions