Farmer revolt: What the economists say 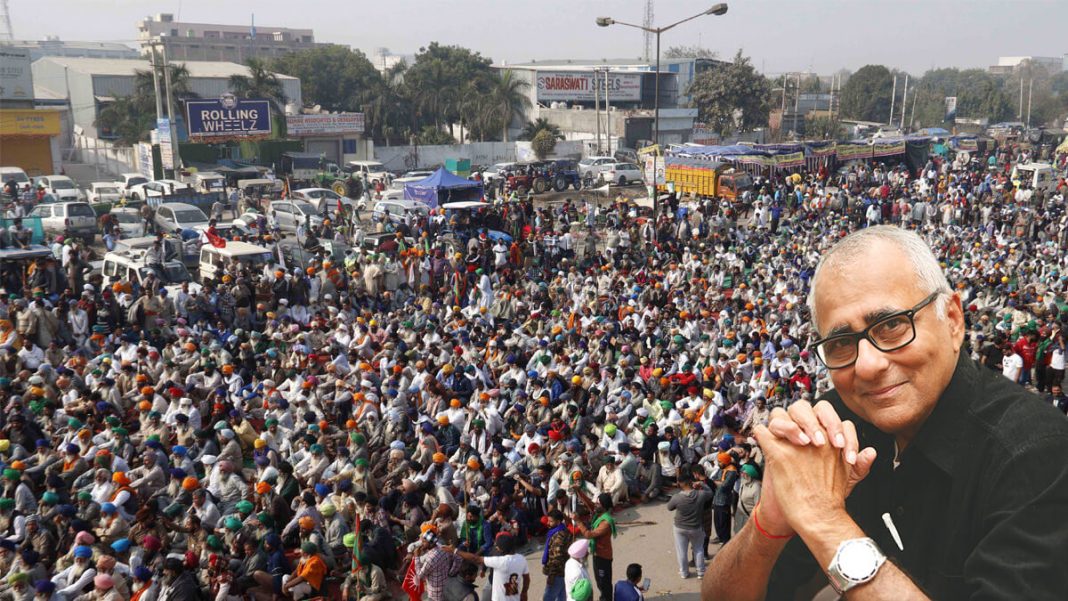 Ten of India’s most noted economists who specialize in agricultural policies and rural commerce have written a reasoned and passionate letter to Union Minister of Agriculture and Farmers’ Welfare Narendra Singh Tomar expressing serious concerns regarding the recent farm laws which merit their repeal.

Their arguments are evidence-based and forceful. They are devoid of political coloration and ideological harangue and believed that they are solidly in the national interest and merit the careful attention of all those who are at the helm of the course of actions that determine the health and future of the most basic activity that sustains India’s very livelihood.

These thought leaders have penned their missive to Tomar at a time of an unparalleled confrontation by cultivators from corner to corner of the country and particularly around the nation’s capital. They wrote in their letter that the farm policies adopted by the government are not in the best interests of the small and marginal farmers of the country, and about which a broad section of farmer organizations have raised very critical objections.

The economists aver that while enhancements and upgrading are essential in the farming market system to promote the well-being and sustenance of millions of small farmers, the alterations brought by these laws do not serve that intention. They are based on what the economists state are wrong assumptions and claims about why farmers are unable to get remunerative prices, about farmers not having freedom to sell wherever they like under the previously existing laws, and about regulated markets not being in the farmers’ interests.

The authors of the letter posit five fundamental reasons why these three Acts, tied together by the  government, are deeply detrimental in their repercussion on the small farmers of India. I reproduce below excerpts of these arguments:

Undermining the State government’s role: Making a Central Act which overrides and undermines the role of state government in regulating agricultural markets is a flawed approach, both from the point of view of Centre-State power balance and also from that of the farmers’ interests. State government machinery is much more accessible and accountable to farmers, right down to the village level, and hence state regulation of markets is more appropriate than bringing a large part of commodity sales and trade under the ambit of the central government act by establishing trade areas. As per the Ministry of Agriculture in July 2019, more than 20 states had already amended their APMC Acts to allow for private mandis, e-trading, electronic payments, e-NAM, etc, with all of them functioning under the regulation of the state government. For any such reforms or new mechanisms to succeed, there has to be a buy-in from all the stakeholders in the market including farmers, traders, commission agents, etc, and this process can be handled with more sensitivity and responsiveness to local realities by the state government, rather than through a drastic and blanket legislative change at the Central level.

Two Markets, two different sets of rules: A key problem with the farm laws is the creation of a practically unregulated market in the trade area side by side with a regulated market in APMC market yards, subject to two different Acts, different regimes of market fees, and different sets of rules. This is already causing the traders to move out of regulated markets into unregulated space. If collusion and market manipulation are concerns inside the APMC markets, the same collusion and market manipulation are likely to continue in the unregulated market space. Within the regulated APMC markets, there exist mechanisms to address and prevent such market manipulation, whereas in the unregulated trade areas the central Act contemplates no such mechanisms. Means of exploitation of farmers include price and non-price issues such as weighing, grading, moisture measurement, etc. In a dispersed situation, farmers are rightly afraid that fairness cannot be ensured on price and non-price factors. Their experience shows that such exploitation is faced at a much higher level by farmers in remote areas which do not have access to structured markets, including tribal areas.

Fragmented markets, monopsonies and problem with price discovery: Even before these Acts came, a large percentage of the sale of agricultural commodities happened outside the APMC regulated market yards. However, the APMC market yards still set the benchmark prices through the daily auctions and offered some reliable price signals to the farmers. Without these price signals, the fragmented markets could pave the way for local monopsonies. The experience in Bihar since the removal of its APMC Act in 2006 shows that farmers have less choice of buyers and less bargaining power, resulting in significantly lower prices compared to other states.

Unequal players in contract farming: In the Act on contract farming, the issue of the huge asymmetry between the two parties, small farmers and companies, is not addressed to provide adequate protection to the interests of the farmers. The current scenario is likely to continue, where most of the contract farming happens through unwritten arrangements with no recourse for the farmers, and most arrangements are made through aggregators or organizers to protect companies from any liability. The Act doesn’t have any provision to address this. Further, the farmers are concerned that the provisions for farm services agreements together with the government’s moves towards a liberalized land lease regime would pave the way for larger scale corporate farming. It should be noted that while contract farming arrangements are voluntary in principle, the acute crisis in agriculture with no price assurances, may push farmers towards this paradigm in the hope of saving themselves from the crisis. However, the reality of contract farming experience doesn’t bear that out in the absence of mechanisms to protect their interests.

Concern about domination by big agri-business: It is legitimate to understand that the three Acts together represent unshackling of agri-business companies from state level regulation and licensing, constraints such as existing relationships between farmers, traders and market agents, and from limits on stocking, processing and marketing. This rightly raises concerns about consolidation of the market and the value chains in agricultural commodities in the hands of a few big players, as has happened in other countries such as the USA and Europe. It inevitably led to the “Get-Big-or-Get-Out” dynamic in those countries, pushing out the small farmers, small traders and local agri-businesses. Instead, what Indian farmers require is a system that enables better bargaining power and their expanded involvement in the value chain through storage, processing and marketing infrastructure in the hands of farmers and FPOs. That would be a path for enhancing farmer incomes, and some of the earlier policy initiatives of the government were expected to help in that direction. However, the present Acts set a different direction where it is up to agribusiness companies, freed from regulation and constraints, to invest and set up processing, storage and marketing infrastructure – consolidating their hold on the value chain – while the government steps back from its commitment to help farmers build infrastructure and consolidate their bargaining position in the market.

“In view of the above fundamental issues,” the authors state,  we believe that amending a few clauses will not be sufficient to address the concerns rightly raised by the farmers. For example, if setting up unregulated ‘trade areas’ outside the ambit of state regulation is in itself detrimental, then any tinkering with a few provisions of the Act is not going to address that. We strongly believe that it is not desirable to perpetuate the impression that farmers are misled by others, when they are raising valid and genuine concerns. The current impasse is not in anyone’s interests and it is the responsibility of the government to proactively resolve it by addressing the farmers’ concerns.

“Therefore, we appeal that the government withdraw these Acts, and hold extensive consultations with farmer organizations and other stakeholders on what measures would really bring equitable and sustainable benefit to the farmers and the economy. It would be the truly democratic thing to do.”