Above: Former BJP leader Jayanti Bhanushali (second from left) who was murdered/Photo: Facebook

An arrest warrant has been issued by a court in Bhachau, Kutch, for former BJP legislator Chhabil Patel for alleged involvement in the murder of Jayanti Bhanushali, former vice-president of Gujarat BJP

Cold power play can leave a deathly stink. Sizzling passion, putrid politics, hateful rivalry and morbid money power in the borderlands of Kutch have created a vola­tile mix that is expected to impact the politics of Gujarat. A recent case that hogged the headlines was of former vice-president of Gujarat BJP Jayanti Bhanushali being shot dead and a red corner notice to be issued soon for his rival, former BJP legislator Chhabil Patel, who is suspected of being involved in the murder along with others. A court in Bhachau, Kutch, has already issued an arrest warrant for him. Other politicians too are nervous following “leaks” that recordings of their amorous adventures are with the absconding culprits.

The killing is believed to be the outcome of simmering political and business rivalry between the two, with both facing allegations of rape and blackmail. Bhanushali had to quit his post because of the charge though it was withdrawn after a court-ratified settlement.

The case is also proof of how grassroots politics is impacted when a long-term political rival is inducted into a cadre-based party, creating clashes with grievous consequences. The pursuit of a Congress-mukt Bharat leading to a Congress-yukt BJP has its perils.

Bhanushali, a former MLA, was shot dead in his sleep on January 7 while travelling in a train from Bhuj to Ahmedabad. He was killed by two masked men who then detrained. Examination of two used and three live cartridges from the spot indicated the use of a country-made pistol. A Special Investigation Team (SIT) was constituted post-haste by DGP Shivanand Jha to crack the case. According to Ajay Tomar, additional DGP, CID, Bhanushali’s killing was a political murder, allegedly masterminded by Patel and a woman, Manisha Gos­wami, who is absconding.

Forty days after the murder, Ashish Bhatia, DGP, CID, announced the arrest of the two alleged killers, identified as Shashikant Kamble and Ashraf Anwar Sheikh. They were nabbed from a government tourist guest house at Saputara, bordering Maharashtra, according to the top cop. He said they were given a Rs 30-lakh contract by Patel to liquidate Bhanushali. The police claimed that two 7.65 mm caliber pistols, the murder weapons, were recovered from a river­bed near Nashik.

But some troubling contradictions emerge. Initial forensic examinations showed the use of a single country-made weapon. The police then said that three pistols from UP were purchased for Rs 1.30 lakh, with two being used for the crime and the third being given to one Vishal Kamble who was lodged in Yerwada jail, Pune. Vishal, the police says, introduced the other two to Patel, and they stayed at his farm in Bhuj. The police then said they had gone off to Mumbai, Pune, Prayagraj, Vaishnodevi, back to Prayagraj and then Saputara where they were nabbed. But there was no plausible explanation for this. 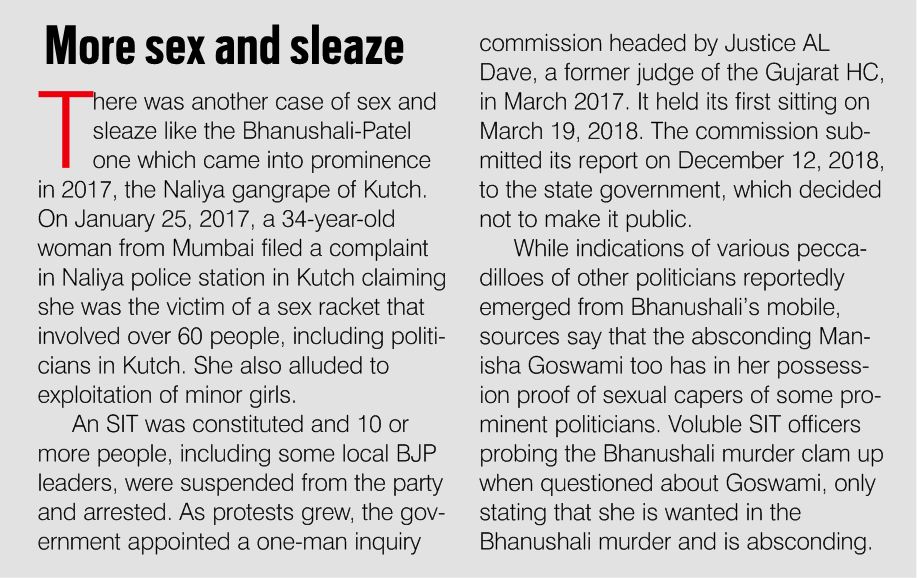 The SIT reconstruct of the crime would have one believe it was the handiwork of hardened killers, including former members of Chhota Rajan’s gang. Bhatia is on record stating that Shashikant was involved in two murders elsewhere (but was acquitted in both) and Sheikh was involved in four cases. However, the Pune police says they are petty criminals with little or no history of murder. But then, how did Patel, an experienced politician, hand over such an important assignment to veritable greenhorns?

Bhanushali was a school drop-out who clawed his way up the BJP by sheer hard work. He won his first Vidhan Sabha election from Abdasa constituency of Kutch in 2007. He was also a cotton trader and later, dabbled in real estate in Ahmedabad. Patel, a law graduate, was with the Congress and shot into the limelight when he defeated former chief minister Suresh Mehta of the BJP in Mandvi constituency of Kutch in 2002. The victory of a Congressman acquired political importance as it came just after the Godhra train carnage and communal riots that created a pro-BJP wave and brought Narendra Modi back to power as chief minister.

Patel and Bhanushali were pitted against each other in the 2012  assembly polls from Abdasa. Bhanushali’s defeat sowed the seeds of an all consuming rivalry. Patel then switched over to the BJP in the run-up to the 2014 general poll and Bhanushali was eased out as president of the BJP’s Kutch unit. With Patel getting a party ticket in 2017, the rivalry got worse. However, the party made Bhanushali vice-president of the state unit. Patel, meanwhile, lost in 2017 to a Congress candidate.

In July 2018, Bhanushali was sucked into a sex scandal when a 21-year-old charged him with rape on various occasions on the lure of getting her admission into a design institute and a job. A complaint to the Surat police commissioner stated that the act had been filmed to blackmail her. Bhanushali resigned soon after. He later came before the Gujarat High Court seeking quashing of the complaint, stating that it had been concocted by one Manisha Goswami who had first targeted a relative, Sunil Bhanushali, and tried to extort Rs 10 crore from him. Sunil approached the police and got Goswami arrested. However, she got judicial relief and came out of jail. Out of revenge, she asked another of her gang members, the 21-year-old, to target him. However, on August 3, this woman appeared before the High Court and stated that she had no objection to the FIR being withdrawn. The rape case was later closed. Interestingly, Goswami is now wanted for involvement in the murder.

Patel, too, was arrested by the Delhi police last year for sexually assaulting a woman whom he had promised a job, but as he had secured anticipatory bail, he was released. Patel, who is out of India, has denied involvement in the murder. A warrant for his arrest was issued by a court in Bhachau, Kutch on February 12 and a red corner notice will soon be issued for him.

All’s not well that ends well.