Above: The Ghazipur landfill had exhausted its capacity in 2008 but dumping continues/Photo: Anil Shakya

With each passing day, the mountain of garbage in the National Capital Region continues to grow taller. The Ghazipur landfill—a dumping ground for waste—is all set to dwarf the tallest brick minaret in the world, the 73-metre-tall Qutub Minar. There has been no shortage of attempts to arrest its growth but these were all thwarted by Delhi’s rising refuse. So alarming is the situation that the Prime Minister’s Office (PMO) has had to step in. The office of the Principal Scientific Adviser (PSA) to the Government of India, Professor K Vijay Raghavan, has been requested by the PMO to find a viable and sustainable solution to this menace.

On July 10, 2019, the PSA’s office issued a global Request For Proposal (RFP) for “waste mining and land recovery at Ghazipur Dump Site in Delhi”. The RFP sought proposals for technology solutions to set up pilot demonstration units for the removal and valorisation of 14 million tonnes of garbage at the Ghazipur dump and/or management and treatment of 2,200 tonnes of waste which is dumped there every day. Open to Indian and international companies or consortiums, multiple technologies may be selected at the pilot stage, as the Ghazipur landfill challenge may require.

Though the funding for the pilot project’s implementation will be provided by the central government, the concerned company (or companies) is expected to share the cost, along with managing the pilot project for 18 months.

Experts are relieved to see the central government’s intervention in the project, expected to begin on October 2, 2019. “The Prime Minister’s Office stepping in will definitely expedite the work,” said Swati Singh Sambyal, programme manager at the Centre for Science and Environment. “The move to get international experts for putting the Ghazipur landfill in order is a reflection of the amount of mismanagement over the last two decades,” said Priti Mahesh, chief programme coordinator at a Delhi-based NGO working on waste. “Though there is expertise to deal with waste in India, the Ghazipur landfill is a special case and obviously in a terrible state. To undo the harm is a huge challenge,” added Mahesh. 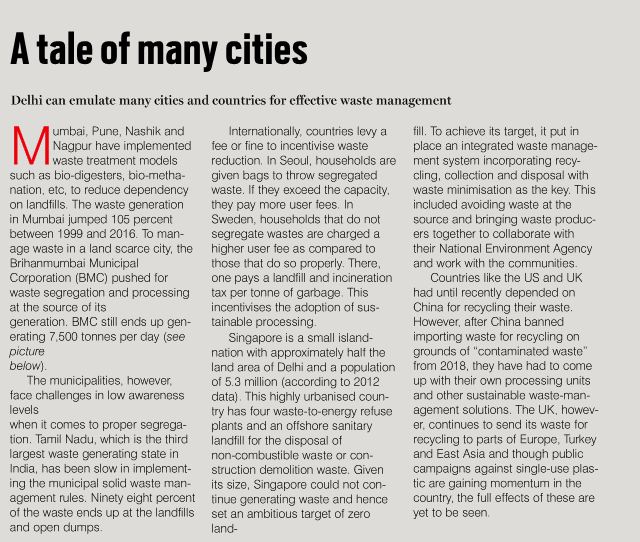 There are a lot of real-time examples that Delhi can learn from to sort out the mess in the Ghazipur dumpyard. Many cities in India have effective waste management infrastructure and systems. “Delhi needs to adopt a hybrid model by looking into different successful case studies and implementing them on the ground. The city needs both centralised and decentralised options as per the availability of land and population density. For instance, South Delhi can definitely get decentralised by adopting the models of Ambikapur and Mysuru while the congested areas of Delhi can go in for centralised processing models. However, segregation needs to be the core of all this,” says Sambyal. Adds Mahesh: “Indore is a good example that Delhi can look at.”

Her opinion is echoed by the National Green Tribunal’s (NGT) chairperson, Justice Adarsh Kumar Goel. At the July 17, 2019, hearing with the municipal commissioners of North, South and East Delhi, the NGT bench came down strongly on the inaction shown by the municipal corporation.

Stating that the main responsibilities to manage waste lay with the municipal corporations, the bench asked the Delhi government and the Municipal Corporation of Delhi to cough up Rs 250 crore to put into action the
bio-remediation and bio-mining plan for reclaiming the land.

Earlier this year, the NGT had demanded the filing of action-taken reports outlining the steps taken to manage the growing mountain of garbage from the municipal corporations of North, South and East Delhi.

Delhi has three landfills, all of which have exhausted their capacity. The Ghazipur dumping site, commissioned in 1984, had exhausted its capacity in 2008 itself but dumping still continues unbated. In 2017, dumping was temporarily banned at the site after an accident left three people dead, but the ban was quickly lifted as Delhi could not find a way out to deal with the 2,200 tonnes of garbage that make its way to Ghazipur. Taking suo motu cognisance of a news report, the NGT sought accountability from the municipalities on its May 30, 2019, order.

As Ghazipur is not a sanitary landfill, there is no concrete base separating the garbage from the ground. This has resulted in contamination of soil and groundwater due to the leaching of chemicals, metals and other toxins. This water sourced through hand pumps in illegal settlements around the site is unsuitable for humans and animals. Central Pollution Control Board (CPCB) officials have relentlessly claimed that it is impossible to stop the leaching and to treat the groundwater to make it safe.

The NGT bench made the Aam Aadmi Party (AAP) government liable for bearing the cost of
bio-remediation and instructed it to begin work on October 1, 2019. It also asked officials to consider the bio-remediation process that Ahmedabad has adopted. Striking down the option of capping the landfills, the NGT bench asked AAP to take a look at Indore’s waste management model.

Repeated attempts at minimising dum­ping has led to no action. Under pressure to find an alternative site to the Ghazipur dumpyard, the East Delhi Municipal Corporation recently received a nod from the Delhi Development Authority (DDA) and CPCB for a landfill near the Yamuna bank. However, environmentalists are vehemently opposing the setting up of a landfill and waste-to-energy plant, claiming that the land is an active floodplain.

There are plenty of examples—both in India and abroad—that Delhi can borrow from but there is no denying that the sheer size of the Ghazipur dump site makes it complicated. Though an action plan has been submitted by the expert committee constituted by the Delhi government regarding collection and disposal of waste in Delhi, little has been done. With the PMO stepping in, hopefully the growing Ghazipur mountain will be finally capped.