Though 136 nations of OECD have fixed a minimum global tax rate of 15% for large corporate entities from 2023, critics aver that the deal will not stop tax havens as a 10-year grace period has been given. 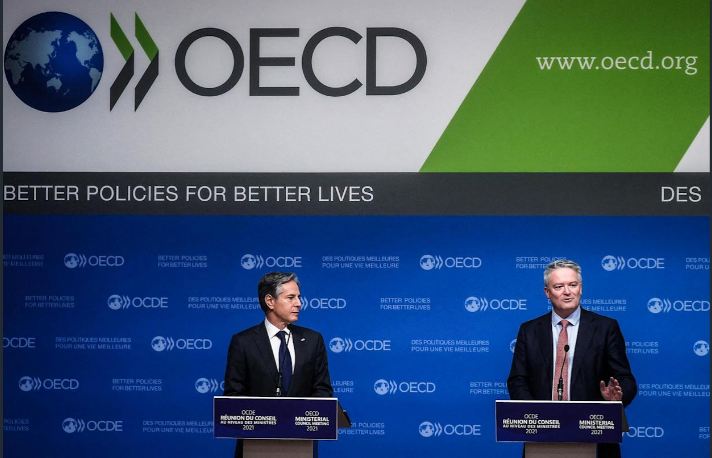 In a breakthrough agreement, 136 nations fixed a minimum global tax rate of 15% for large corporate entities and sought to make it tougher for them to circumvent taxation. US President Joe Biden said this levelled the playing ground.

The Paris-based Organisation for Economic Cooperation and Development (OECD) on October 8, 2021, declared that its members had consented to fix a universal minimum tax rate for corporate establishments from 2023. Out of the 140 nations concerned, 136 backed the deal, with Kenya, Nigeria, Pakistan and Sri Lanka refraining.

The global minimum tax is shaped to tackle the low amount of tax paid by a few of the world’s giant entities, comprising big tech companies such as Apple, Alphabet and Facebook. These corporations usually rely on complex webs of subsidiaries to siphon gains out of major markets into low-tax countries or tax havens, such as Ireland, British Virgin Islands, Bahamas or Panama.

Between 1985 and 2018, the global average corporate tax rate fell from 49% to 24%. By 2016, more than 50% of all US’ corporate profits were booked in seven tax havens—Bermuda, Cayman Islands, Ireland, Luxembourg, the Netherlands, Singapore and Switzerland. That cost the US Treasury $100 billion a year, according to sources.

The deal ends the four-decade-old “race to the bottom” of nations that sought to entice investment and jobs by taxing transnational companies softly, effectually permitting them to shop around for low tax rates. The 15% tax approved is well below the corporate tax rate, which averages 24% in industrialised nations.

This global tax reform sows the seeds of how tax collaboration will function globally and will stop tax evasion by multinational entities who seek to gain from varying and unglued tax laws and regulations to reduce their total tax rate. Numerous economists anticipate that the deal will motivate multinationals to deport capital to the country of their headquarters, giving a boost to those economies.

Many governments which were fiscally injured by Covid-19 want to dispirit multinational entities from transferring profits and tax revenues to low-tax nations irrespective of where their sales have occurred. Progressively, income from intangible sources, such as drug patents, software and royalties on intellectual property has been transferred to these countries. This permits these companies to escape paying higher taxes in their traditional home nations. The minimum tax and other provisions aim to end tax competition between governments to attract foreign investment.

The new tax proposal follows a general plan that has been debated since 2019. There has been a prolonged effort by the OECD, which started with the Base Erosion and Profit Shifting (BEPS) project. BEPS refers to tax evasion plans that exploit gaps and disparities in tax rules to artificially transfer profits to low or no-tax zones. OECD has issued 15 Action Items to address this and it has been distributed under Pillar 1 and 2. Pillar 1 is centered on changing where big corporate units pay taxes and Pillar 2 comprises the global minimum tax. Both pillars have multiple components.

Pillar 1 comprises “Amount A” which would relate to organisations with over €20 billion in incomes and a profit of more than 10%. For such organisations, a part of their gains would be taxed in territories where they have made sales, that is 25% of profits above 10% surplus may be taxed. After a review tenure of seven years, the €20 billion limits may reduce to €10 billion. Corporate entities in sectors such as oil, gas, mining and financial services would be exempted from the strategy. Pillar 1 also covers “Amount B” which would offer a simpler method for entities to compute the taxes they owe on foreign activities such as marketing and distribution.

Pillar 2 is the global minimum tax and includes two main rules and a third one for tax treaties. These rules are meant to apply to companies with more than €750 million (approximately Rs 66 billion) in revenues. This is more like a pattern than a prerequisite for nations. If many nations accept the rules, many of the corporate profits across the world would face a 15% effective tax rate.

In contrast, a few developing nations say their interests have been neglected to adapt to the welfare of wealthier nations like Ireland, which has rejected the deal. The economy minister of Argentina, Martin Guzman, said that suggestions on the table compelled developing nations to select between “something bad and something worse”. While Nigeria, Kenya and Sri Lanka did not support the deal, Pakistan’s non-participation was a shock.

There was displeasure from Oxfam, which said that the deal would not stop tax havens. Oxfam tax policy lead Susana Ruiz, reportedly, said: “At the last minute, a colossal 10-year grace period was slapped onto the global corporate tax of 15%, and additional loopholes leave it with practically no teeth. The tax devil is in the details, including a complex web of exemptions.” Thus, organisations with real assets and payrolls in a nation can safeguard some of their income evasion.

With 136 nations accounting for 90% of the global GDP approving the agreement, there is likely to be a considerable drop in tax dodging following the deal. Making low-tax territories, such as Ireland, Estonia, and Hungary, joining the deal concretises the path for soft implementation.

However, the last word has not yet been written on this as governments will have to back the deal. But the deal should be welcomed by all as it will aid the establishment of a correct tax system and free countries from long-drawn out litigations with large MNCs.

Nonetheless, nations that support the agreement are assumed to bring it into their law books next year so that it can be implemented from 2023.

This will be a tough task for many. The deal also encroaches on the right of a government to determine a nation’s tax strategy. Overall, the deal itself is a wonder—getting 136 nations to come to a common taxation platform is not easy.