Gurmeet Ram Rahim Singh was convicted again last week. In earlier cases too against him, investigative agencies found it a herculean task to secure prosecuting witnesses, emphasising the need for a law on witness protection. 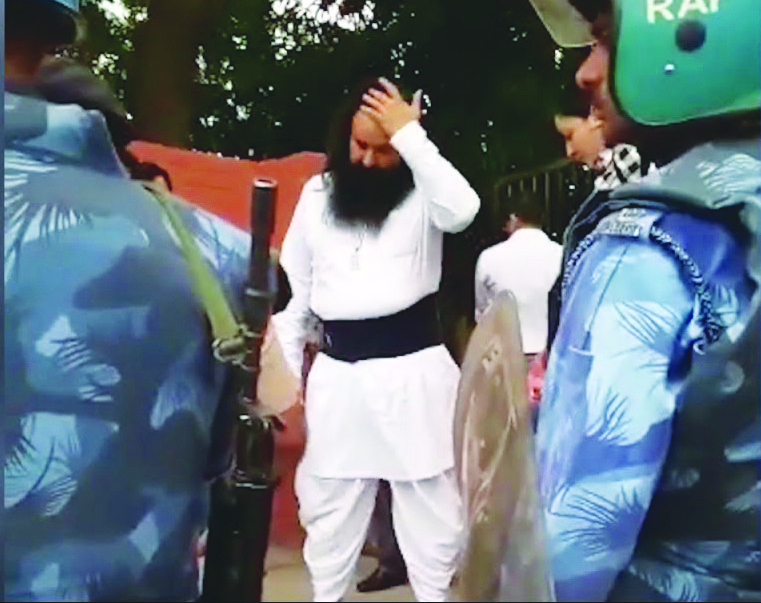 The infamous Baba Gurmeet Ram Rahim Singh of Sirsa, the self-styled godman of what is known as the Dera Sacha Sauda in Haryana, who has been languishing in Sunariyan Jail for the rape of a couple of female disciples, has been convicted again, this time in a murder case. Both the judgments came from the CBI Special Court. One judgment concerning rape by the godman in 2017 and another for murder by the same accused as recently as last week. In both cases, the investigative agencies found it a herculean task to secure prosecuting witnessing, since the Baba wields enough power with whichever government that had been ruling the state. The Indian Express places the Baba among the one hundred power wielding persons in India.

The rape case involving two girls and the murder case of a worker Ranjit Singh, had the prime prosecuting witnesses, chased and hounded, threatened and bullied to the extent that in the latter case, Khatta Singh who was the driver of the vehicle the Baba travelled in, was made to buckle under pressure earlier, a fact he made known to the Court at a later date in 2018, to have the trial begin afresh convicting the Baba of murder. The CBI has gone on record stating that it was but for the evidence provided by Khatta Singh that the conviction could be secured. According to the CBI Special Public Prosecutor, HPS Verma: “This witness is the eyewitness of both the incidents dated June 16, 2002, and is, fortunately, the direct evidence with the prosecuting agency regarding the hatching of the conspiracy by the accused about the murder of the victim.” This is a high profile case which has once again raised the question of witness protection in our criminal justice delivery system. This raises the question of whether it is for the State to provide ways and means to protect the witnesses from physical harm, if not for being allured or won over otherwise by other means.

The Kerala High Court was recently alarmed by the increasing number of cases registered under the Protection of Children from Sexual Offences Act (POCSO) in the state and the absence of a procedure to protect children from these offences or threats from the perpetrators. Justice Devan Ramachandran while hearing a plea raised by a victim and her mother seeking police protection in a POCSO matter citing that they were being threatened by the perpetrator, expressed his concern over the lack of a victim protection programme: “It is high time that we implement a victim protection scheme in the State. Right now, it only exists on paper,” he observed.

Since the registration of a case against Asa Ram Bapu, another self-styled godman, and his son Narain Sai, alleging rape and molestation, all through the trial, a series of crimes was witnessed committed to browbeat and threaten the witnesses. The timeline reveals a certain pattern and raises reasonable suspicion against the perpetrators. There was a stabbing incident in Surat, of one of the rape survivors on February 28, 2014. In the same case, 16 days later, two unidentified men carried out an acid-attack on a witness. The same year on June 11, a witness and a former aide of Asa Ram, Amrut Prajapati was shot. In January 2015, Asa Ram’s cook Akhil Gupta was shot dead in Muzaffarnagar. The same year in February, Jodhpur rape case witness Rahul Sachan was stabbed outside the local court. On May 13, 2015, a prime witness, Mahender Chawla was shot at in Panipat. These figures exclude the witnesses who turned hostile. In all such cases the witnesses seemed “to know more than what should have been enough for them”.

Like the two brave outraged girls, who fell victim to the godman’s lust; like the driver Khatta Singh, who having been browbeaten into submission once stood against the perpetrator of murder and got him convicted; a word of appreciation should be due for officers like Ajay Pal Lamba, a 2005 batch officer, who was made overall in-charge of the investigation into the case against Asa Ram and who received innumerable threats but the braveheart did not divert from his duty and ensured the conviction of the immoral Baba. Likewise, forensic science and medical experts, besides the prosecutors, are people who strengthen a case for bringing culprits to justice.

This leads us to the question of witness protection. The gory pattern of eliminating witnesses has prompted the common citizenry, more than legal minds, on the need to have a witness protection law in this country. It’s common knowledge that in the criminal justice delivery system, a witness has to play a crucial role in securing conviction for an accused, or letting him be acquitted; in the latter case, the vested interests take to witness elimination, ensuring either he/she doesn’t depose because of the threats extended, or is allured and won over, or, if found “unshakable,” murdered.

Some positive news has come from the national capital. In 2015, the Delhi Legal Service Authority came out with a “Witness Protection Scheme” for which separate funds have been provided and the police commissioner has been vested with the task of implementing the scheme. Senior police officers keep in touch with the witnesses on a regular basis. Threat analysis is done on individual cases and whenever a reference in this regard is made.

The Criminal Procedure Code does not specifically define a witness, who broadly speaking, is a person having knowledge about a certain fact, and when he deposes, it is the attestation of that particular fact. A witness is the cornerstone of justice and indispensable part of the criminal justice system. Professional criminals understand the nitty-gritty of arrests, bails, investigations, judicial process and trials. Circumventing the norms by hook or crook, by arm-twisting and intimidation, by using money power, political contacts and ensuring delays, they influence the witnesses in various ways, including through seductive allurements. Hence, the need for witness protection lest either they should be eliminated or turn hostile, thereby affecting the conviction of accused persons.

In cases of rape and molestation, terrorism, gang wars, communal violence, and organized crime, it’s most incumbent to depend on the testimony of witnesses. In countries like the United States and the United Kingdom, they have witness protection programmes to fight such crimes. America’s WITSEC (Witness Security) has its roots in the Ku Klux Klan vigilante’s actions. This programme guarantees protection to the witness and his/her family, their relocation, providing job, funding, during the trial and even after the trial, till the family is rehabilitated, even financially. In cases of terrorism, this programme has the provision of taking the witnesses even to a holding area before their relocation.

This programme provides for the witness’s face being screened or blurred, even to the judge and the jury, as also adopting pseudonyms, and giving different voice modulation, during the trial, to not compromise the identity of the witness. In the US, while tackling gang war cases, WITSEC gives a new witness identity to the approvers and relocates them. English law even sanctions plastic surgery of the witness to conceal his identity. In England, a child victim of sexual abuse is never made to confront the perpetrator of the crime during trial and the victim’s deposition. Criminal Law Amendment Acts in India have addressed this issue of late though.

The Supreme Court has on many occasions, called for enactment of laws, relating to witness protection. In the matter of Swaran Singh versus State of Punjab, the apex court observed: “A witness has to visit the court at his own cost. Every time the case is deferred. Nowadays it has become more or less fashionable to repeatedly adjourn a case. Eventually, the witness is tired and gives up.”

The Court further observed: “While adjourning a case without any valid cause, a court unwittingly becomes party to miscarriage of justice too. Most witnesses have to wait their turn. And when their time for deposing or the giving of evidence comes, the lawyers examine and cross examine them as if they themselves are the perpetrators of the crime.” The unfortunate part in our system is that the judge is not inclined to find the truth and the State does not owe it upon itself to be responsible for witness protection.

There are various Law Commission reports suggesting an idea of having a witness protection programme in our country. Even the Malimath Committee report endorsed the need for this, but unfortunately, without specifying it in clear terms. The Law Commission’s 198th report on “Witness Identity Protection” and “Witness Protection Programmes” of 2006, was forwarded to the states for inputs. Unfortunately, the states did not respond positively.

The Centre in 2016 then tasked the Bureau of Police Research & Development to examine the issue and study the financial implications as well. In a way, the issue seems to have been brushed under the carpet one more time. In fact, the National Crime Records Bureau does not tabulate information on murder or elimination of witnesses exclusively, if it were to be done, the figure would be an eye-opener.