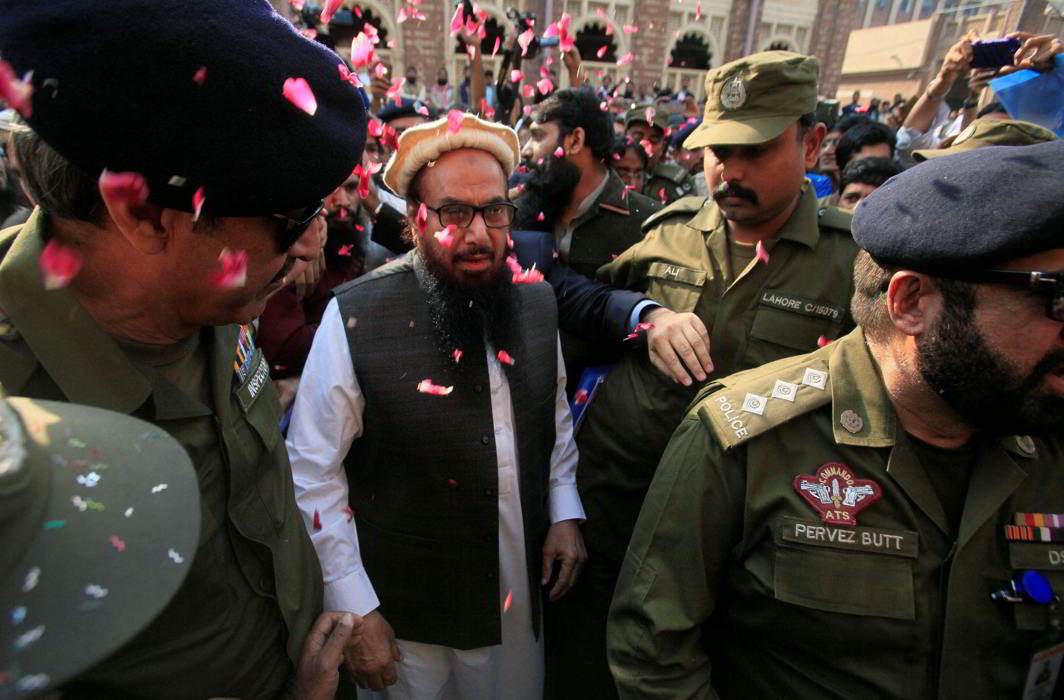 Above: Hafiz Saeed is showered with flower petals as he walks to court before his release order. Photo: UNI

Two days after the Pakistan’s Lahore High Court ordered the release of 2008 Mumbai terror attacks mastermind Hafiz Saeed on Wednesday (November 22), the Jamaat-ud-Dawa chief, on Friday (November 24) walked free from his house arrest. He was released from his 300-day house arrest as his detention expired on Thursday midnight.

Saeed, who was put under house arrest in January, did not hold himself back from making controversial statements soon after his release. He said that he will continue to work for the cause of Kashmir. He said that his only crime was that he wanted Kashmir’s freedom from India and he was arrested for the same.

“I am not struggling for any personal gains. My struggle is aimed at safeguarding the interests of Pakistan. I want Kashmir’s freedom from India and this is my crime. I was arrested for it,” he said.

He also lashed out at former prime minister of Pakistan Nawaz Sharif saying that Sharif was ousted because of his “betrayal” of the Kashmiri people. Sharif was actually thrown out of office on alleged corruption charges.

India is visibly upset at Saeed’s release and it has not minced words while expressing its displeasure. Responding to Saeed’s comment on Kashmir’s freedom, the Ministry of Home Affairs, in a statement reiterated that Kashmir “is and will remain an integral part” of the country. It also termed Pakistan as a “terrorist constituency” in its statement. “The recent statement of Hafiz Saeed is a rearticulation of the terrorist constituency which has thrived across the border,” said the home ministry.

The Ministry of External Affairs had yesterday expressed disappointment at the release of Hafiz Saeed. The MEA had termed the move as an “attempt by Pakistani system to mainstream proscribed terrorists.”

Saeed’s release order came after a review board headed by Justice Abdul Sami Khan of the Lahore high court on Wednesday (November 22) refused to extend the detention of the Jamaat-ud-Dawa’s (JuD) chief. This was after a senior official from the finance ministry of Pakistan failed to convince the board that releasing Saeed would invite diplomatic and financial problems for the country.