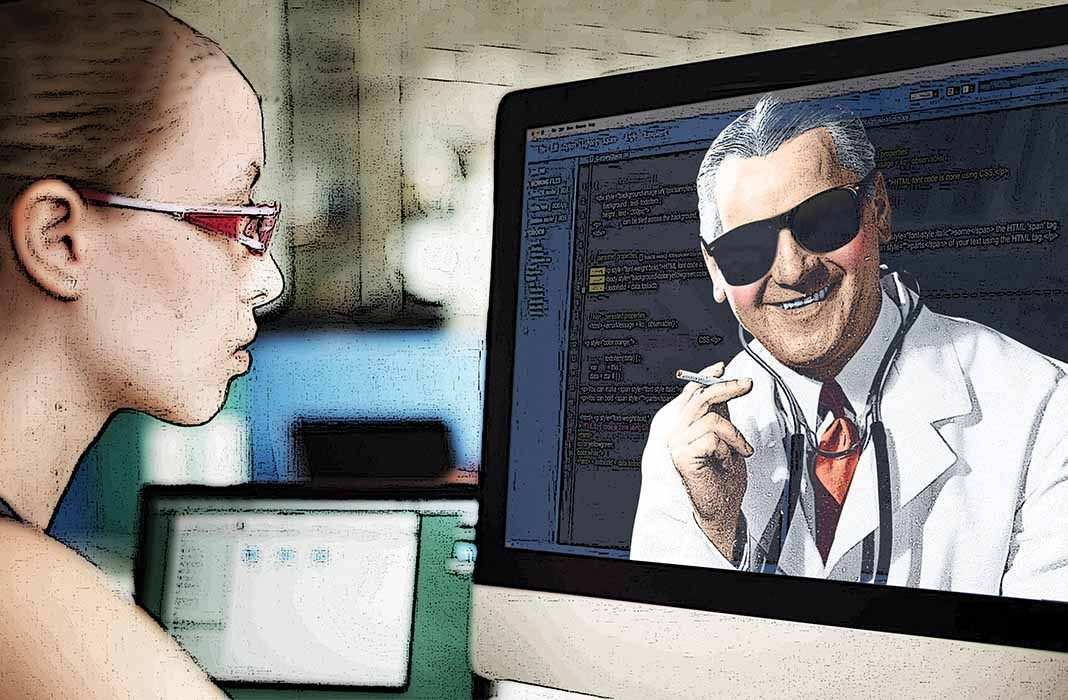 Demonetization has led to many patients opting for online consultations. But, the medical practitioner diagnosing you online may not even be a doctor… and the Medical Council of India pleads helplessness as there is no regulation in place

In these hurly burly days of demonetization, the common man has been hit in more ways than one. In an effort to save on precious cash, he has found innovative ways to change his lifestyle, including health. Those suffering from common medical conditions are now opting for online doctor consulting where they can pay through cards or cheques rather than cash. But how safe are these and are there regulations to protect the consumer?

So if there are any malpractices in this sector, there are no redressal mechanisms for patients. With no face-to-face interaction or diagnostic skills being utilized, complaints can be galore. While there has been some talk about including the subject of online consulting in the medical curriculum, there has been no headway as yet. Not a happy situation.

Whatever little regulation is there is being done by the portals themselves, be it for doctors on their panel, patients or the type of consultation that can be given (see box). Most of them claim the following—quick and easy consultation, instant answers, second opinions, highly qualified doctors and advanced technology. While online portals have their advantages, there are many cons.

“We have safe, sound systems”

Justdoc.com, a well-known Bangalore-based online doctor portal, was started in July 2015 by three IIT-Roorkee graduates. They did a pilot project on it for two months and got reviews from patients before going fully online. Today, they have some 500 doctors on their panel. ABHISHEK KUMAR, one of the co-founders, tells SHOBHA JOHN that all legal safeguards are followed to protect the interests of patients. They also have a lawyer-doctor who looks after the legal aspects of the portal

How can a patient wanting online consulting trust the credibility of the doctor on the other side?

The same way he trusts a normal doctor whom he goes to see either on a recommendation or through word-of-mouth. The doctors on our panel, some of whom are on the President’s panel too, are all screened by us. We get doctors through references from other doctors too. Many are specialists from well-known hospitals such as Manipal Hospital.

What is the screening process for doctors?

We have a panel of three doctors which screens those whom we take on board. There are three stages for accepting a new doctor on our portal. One is a basic interview. Then we do a test call pretending to be a patient to see how he talks. Then we check that doctor’s medical registration number with the MCI and his PAN number.

Have you had complaints from patients about some doctors?

Yes, and we have removed 5-10 doctors from our panel. Some were removed for being too aggressive and speaking rudely. Many of our patients are from Tier-II and Tier-III cities where doctors may not have the expertise to solve specialized cases. We also have a manual guideline for doctors. For example, a gynecologist can’t take medical termination of pregnancy cases or prescribe medicines for it as this strictly needs a physical visit. Also, in serious cases in areas such as cardiology and oncology, our doctors only give second opinions after the patient has shown all the reports. For psychology cases, we do video calls. Out of some 100 cases, 2-3 need face-to-face consultation.

Do you have options for doctors?

Yes, they can join us as consultants or give second opinions.

What documents do patients have to give to doctors in your portal?

They can have a combination of the following: medical records, medical images, live two-way audio and video, interactive audio and output data from medical devices and sound and video files.

What are your rates?

As there is no regulatory framework governing tele-medical practice, how does your company keep itself safe from potential legal liability?

We have drawn up contracts and other documents like service agreement, informed consent form and disclaimers wherein the patient is told clearly that what is provided is only general information which must not be interpreted as an indication of the presence or absence of a particular disease or ailment. He is also told that such information should never replace physical treatment by a doctor.

First the pros. Bobby Gupta*, a software engineer, is a recent convert to online medical consulting, thanks to demonetization. He started it some 10 days after Prime Minister Modi’s announcement. “My wife was having a gynecological problem and we went to clinics close to our house to consult a doctor. But no one was willing to take old Rs 500 notes. Hospitals were too far away. In desperation, we tried an online site at 10.30 pm and within five minutes, a gynecologist from a top hospital had called us. She mailed the prescription and we ordered the medicines from another site. I paid the consultation fee—Rs 250—through my debit card.” Asked if he would try online consultation again, Gupta said he might for small problems. “My wife feels better. E-medicine is so simple and even the follow-up treatment is free,” he said. 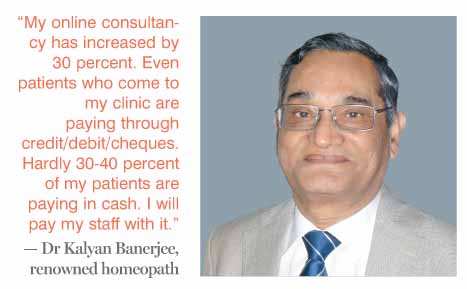 For Abhishek Kumar, co-founder of Justdoc.com, a Bangalore-based online doctor portal, demonetization has been a boon. “In the last one month alone (from October 20-November 20), transactions increased to over 40 percent. More patients are making payments through Paytm—this has increased from five percent to around 20 percent. Earlier, we used to get patients who wanted to use the cash-on-delivery (CoD) feature but from November 8 when demonetization started, no one has approached us for this form of payment. For lab tests also, CoD has decreased and Card on Delivery (Instamojo) has increased. It’s a win-win situation for us,” Kumar said.

Dr Kalyan Banerjee, a renowned homeopath in Delhi, said his online consultancy had increased by 30 percent. “Even patients who come to my clinic and would normally have paid in cash are now doing so either through credit/debit/cheques. Hardly 30-40 percent of my patients are paying in cash. I will use the money to pay my staff, but if this situation persists, I will have a problem on my hands.”

The fallout of demonetization is already being felt in hospitals. Dr Vikram Sarbhai, senior consultant at National Heart Institute, Delhi, said he has seen a 50 percent drop in patients. “Many may be doing online consultations to reduce the use of cash. Even those who pay by cash are going through some hardship to get it.”

Another pro is the easy accessibility. A 2016 FICCI-KPMG study on “Indian Healthcare Startups” said that according to MCI, the doctor-patient ratio was 1:1,674 against the WHO norm of 1:1,000. That shows the great potential for healthcare startups (of which online doctor consultation is one part). For example, 99doctors.com, an online doctor portal, has over 150 board-certified doctors in more than 50 fields of specialization. This sort of e-consulting brings medical care within the reach of those living in remote areas, reduces the crush of patients in over-burdened hospitals and brings down costs. 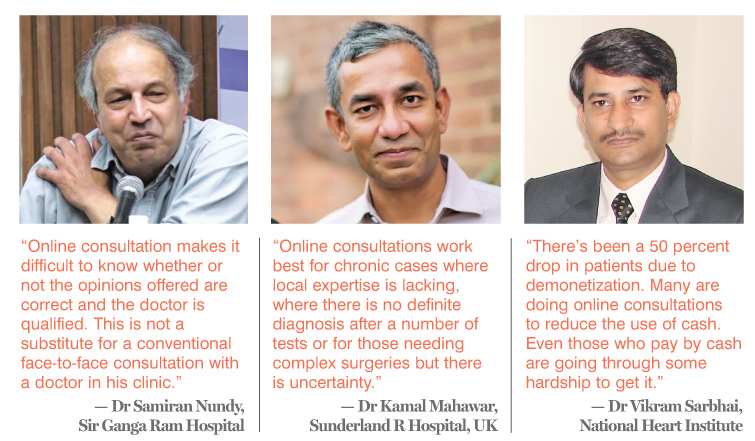 India Legal spoke to the medical fraternity about online consultations and found that if used with care, it was a good option. Dr Kamal Mahawar, consultant general and bariatric surgeon, Sunderland Royal Hospital, UK, and author of The Ethical Doctor, said: “The obvious disadvantage is the lack of direct face-to-face interaction and inability to examine the patient.” Online teleconsultation can only supplement the opinion of a local doctor, not replace it. Tele-health, he said, is encouraged in UK’s National Health Service as it might offer cost savings.

Dr Samiran Nundy, consultant, Department of Surgical Gastroenterology and Liver Transplantation, Sir Ganga Ram Hospital, said: “This is not a substitute for a conventional consultation with a doctor in his clinic. Also, online consultation makes it difficult to know whether the opinions offered are correct and the doctor is qualified.” This should best be used on a wider scale for public health delivery in India, suggested Mahawar. “It will take expertise to rural populations without the need for top-class clinicians to be physically based there.”

Shockingly, while the market for online doctor consultation is around $18 million in India with a compound annual growth rate of 22 percent and a total potential of around $6 billion, it is not regulated at all.

It is time that the MCI lays down regulations, while keeping a few points in mind:

It is best for patients to check the identity, credentials, location, experience and expertise of doctors on these portals before approaching them. Therefore, they should consult doctors only on approved platforms. Sarbhai said there remains scope for a lot of manipulation. “What if an online doctor has been debarred from practice?” he asked.

Mahawar said that online consultations can work best for chronic and protracted conditions wherein local expertise might be lacking or where there is a need to supplement it. Patients with advanced cancers, those with no definite diagnosis after a number of tests or those needing complex surgeries but where there is some uncertainty, might benefit most. In the case of cancers, the local doctor could do the test to establish the stage of the disease, and the online specialist could guide. “The concept of remote cancer multi-disciplinary teams works well in the UK,” he said.

Also, Nundy said that many medical problems have so-called “classical” symptoms. “A heart attack is usually accompanied by a crushing chest pain radiating down the left arm, a duodenal ulcer by a gnawing pain in the upper abdomen after a meal which is relieved by antacids and stomach cancer by loss of appetite, weight loss and vomiting after food.” So if an online doctor is bright and can diagnose these symptoms correctly, the patient is in safe hands.

It is high time that the MCI wakes up to this growing but unregulated market and lays down rules for it. After all, as Nundy said, they do offer some sort of diagnosis.