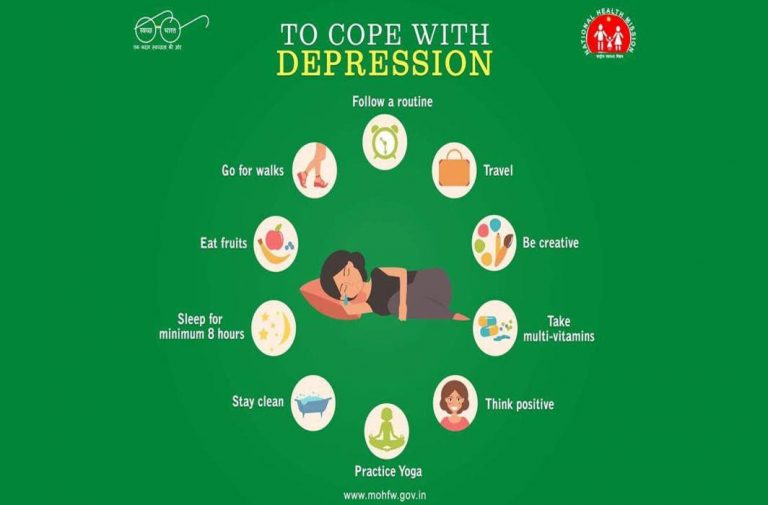 It is yet another case of swallowing obsolete developments and trends from the West, hook, line and sinker, including those from the world of ideas. Very recently, the Ministry of Health and Family Welfare, Government of India, has tweeted a poster advocating “Think Positive”, a strategy that, along with some others, will purportedly help combat depression.

The other strategies, proposed by the ministry include following a routine, travelling, being creative, taking multivitamins, thinking positive, practising yoga, staying clean, sleeping for eight hours, eating fruit and going for walks.

According to the World Health Organisation, over 56 million people in India, coming up to about 4.5 percent of our population, suffer depressive symptoms. However, according to the National Mental Health Survey, there are 150 million Indians who are mentally ill, and of them, only 30 million are seeking care. In any case, it is a massive number.

But doctors and psychologists in India and also abroad are highly critical of this move. They believe it undercuts the role of drugs, talk therapy and self-improvement in combating the condition. They also believe it endorses what many term as “the tyranny of positive thinking”.

What is depression? Depression or major depressive disorder (MDD), also known simply as depression, is a mental disorder characterised by at least two weeks of low mood that is present across most situations. Pertinently, it is also marked by cognitive dysfunction that affects a person’s perceptual thinking as well as the ability to acquire, understand and respond to information. In the late 1990s to early 2000s, Martin Seligman and Mihaly Csikszentmihalyi began a new domain of psychology called positive psychology which focused on “the good life” and optimism as a means to combat depression.

However, scientists believe that positive thinking without reckoning with the negative feelings first leads to cognitive dissonance, which increases rather than decreases stress and undermines well-being as well as the ability of a person to respond to challenges and changes in his situation. Harvard psychologist Susan David has questioned terming feelings negative in the first place as each have unique purposes and functions. She advocates emotional agility which, she says, is a state that every person should aim for in order to improve their mental health. She is backed by Barbara S Held who, too, highlights the role of so-called negative feelings while criticising the one-size-fits-all approach of positive psychology. And while a large section of thinkers believe that the pursuit of happiness is the purpose of life, both Canadian celebrity psychologist Jordan Peterson and existential humanist Kirk Schneider profess that “perhaps genuine happiness is not something you aim at, but is a by-product of a life well lived—and a life well lived does not settle on the programmed or neatly calibrated”.

Peterson says that for best results one should pursue meaning rather than happiness, and that “happy people do not have good judgment, they are too busy being happy”. He is joined in this observation by sociologist and writer Barbara Ehrenreich. With positive psychology blossoming into a fierce industry, Ehrenreich warns of “a corporate culture which, by the middle of this decade, was completely in a bubble of mandatory optimism and positive thinking”. According to Ehrenreich, an unbridled, shortsighted and reckless push towards optimism and buying into the perception of a future where nothing could ever go wrong partly catalyzed the US financial meltdown of 2008.

In fact, positive thinking has been shown to work only in circumstances of short-term stress, and is a good strategy to be used to supplement therapy and, if required, drugs; but not as a first resort for the patient say doctors. Such a policy is especially dangerous in India, given the stigma in our society towards taking of psychotropic drugs and towards mental patients.

“We know that depression needs medical attention and the chemical imbalance in the brain can be corrected with medicines and cognitive therapy also helps,” Dr NN Raju, consultant psychiatrist at Visakhapatnam, says. “What they have said in the poster can perhaps help prevent mental illness and are good tips to keep happy but not tools to cope with depression.” “There is no scientific evidence that multivitamin can treat depression,” he added.

Psychology professor at Ashoka University Simantini Ghosh writes, “A characteristic presentation of depression is anhedonia, the inability to feel pleasure… Simply asking a depressed individual to ‘think positive’ without giving the person a cognitive restructuring framework and providing requisite skill sets is completely ineffective.” She later compares depression to blindness and says that expecting a depressed patient to benefit from positivity is as “laughable as holding a primarily blind person responsible for not trying hard enough to see” as “the hardware in the brain needed for processing positivity is [already] compromised on multiple fronts”.

“This poster deals with the physical aspect of the condition,” counsellor Dr Nisha Khanna tells India Legal. “A lot of times, depressed patients stop doing these things. And they usually can’t be coaxed back into re-adopting these habits as they need to navigate their emotions first, and possibly take action to improve their circumstances and sense of being. If that does not work, we advise them to go to a psychiatrist. The strategies mentioned in the poster to cope with depression are not incorrect, but can at best provide only supplementary therapy.”

The thing to do for the government then would, perhaps, have been to invest more in creating mental health infrastructure and spreading awareness for the benefit of the large number of mentally ill in our country rather than tweet such an arguably misleading poster. A group of doctors has already written to Health Minister JP Nadda asking him to withdraw the poster.

A call to the ministry resulted in the information that it hasn’t. Well, perhaps, the resistance shown to it from the scientific and medical community will have the effect of the government at least rethinking this policy before propagating it on a larger scale. Not all problems, including those of the individual mind, can be brushed under the proverbial carpet or swept up and neatly filed away behind a big, broad smile, can they?