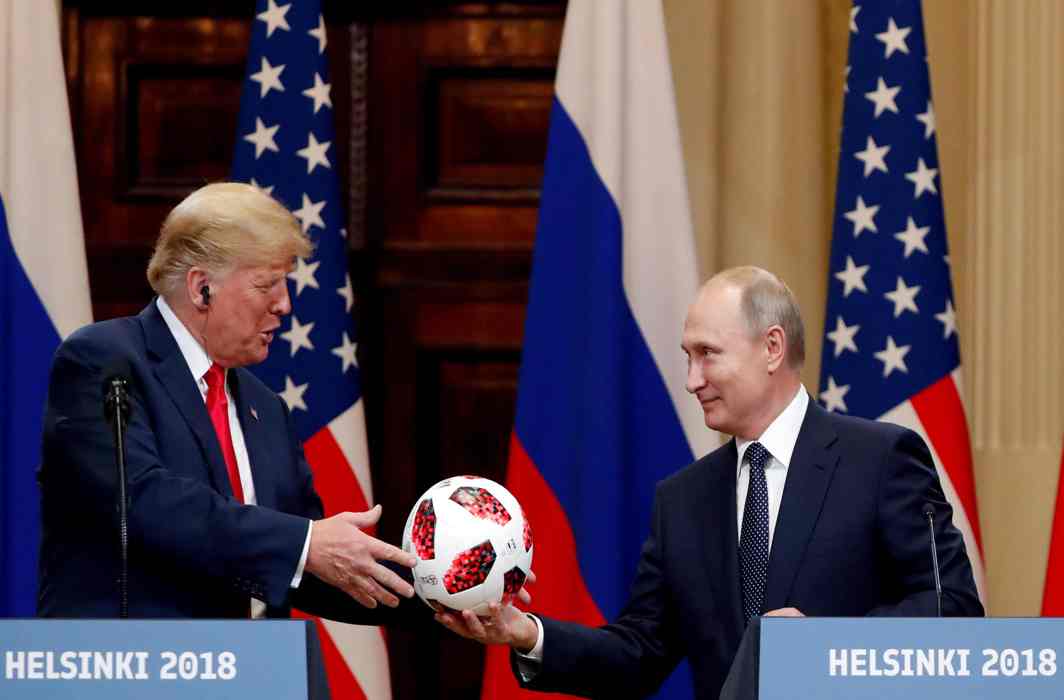 Above: US President Trump with his Russian counterpart, Vladimir Putin, at their joint news conference in Helsinki/Photo: UNI

US President Donald Trump was roasted back in America after his diplomatically disastrous meeting with Russian President Vladimir Putin. It has left the world a more dangerous place

If you rearrange the letters in the word  “NEWS” you get N.S.E.W.  Typically the order in which compass settings are described. Trying to find the compass settings for the direction of American foreign policy today ranges from difficult to impossible. When you are lost at sea you blame the navigator, in this case President Trump, a man who relishes going with his gut feelings rather than State Department expertise. Never has this been more obvious than in recent weeks. Today the only certainty seems to be uncertainty. This has caused—quite intentionally it appears—bewilderment and fear in global capitals and coffee houses, debating the exact moment of America’s death as a world power.

If the Putin Trump news conference in Helsinki was a weak performance by  Trump, his walkback of what he said was amplified by walking back the walkback; forget collusion, the operative word for what is happening is confusion. From the beginning of European trip it  hasn’t been the best of times for a businessman being president.

Things went badly with the NATO Brussels meeting during which came word the US special prosecutor had indicted 12 Russian intelligence officers for hacking into the Democratic Party’s computer servers in 2016. His Helsinki meeting with  Russian President Vladimir Putin came less than 48 hours later. Trump publicly raised none of this with Putin. Instead, incredulously to American political observers of all stripes,  Trump called the special probe “ridiculous” and repeated his claim it is a “witch-hunt”.

Answering a reporter, Putin conceded he wanted Trump to win the election because it promised warmer ties with Moscow. Trump came back denying his own American intelligence for “thinking” the Russians tampered with the US election when Putin had denied it.

Is this the first overt sign that these two leaders would like a new world order, preferably of two? Earlier in the week Trump kept tossing verbal bombshells while meeting with the North Atlantic Treaty Organisation (NATO) leaders and the British Prime Minster. In his view, allies have become foes and Russia, a modest economic power, is his new best friend. Trump showed deference by repeatedly refusing to criticize the Russian president, noting that his description of him as a “competitor” was meant as a compliment.

A chorus of criticism  followed. The first walkback tried to suggest his remark, “President Putin, just said it’s not Russia. I will say this: I don’t see any reason why it would be”, was meant to be “wouldn’t”. Trump said as well ,“I have full faith in our intelligence agencies. There is a need for some clarification. It should have been obvious, it ought to have been obvious.”

However,  asked at a subsequent cabinet meeting if Russia was still targeting the U.S., Trump replied “no.” Thus again undercutting his Director of National Intelligence Dan Coats, who said last month that “we continue to see Russian targeting of American society in ways that could affect our midterm elections.”

Democrats and others in opposition to this president were angry about this flaccid performance by Trump, who cannot feed off of professional journalists the same way he can reflect the delirium of his fanbase at rallies. It went downhill from there with his usual cheerleaders.

Fox News host Neil Cavuto—who has been critical of Trump on some things—said, “It’s not a right or left thing to me, it’s just wrong. A U.S. president on foreign soil talking to our biggest enemy, or adversary, or competitor—I don’t know how we define them these days—is essentially letting the guy get away with this and not even offering a mild criticism. That sets us back a lot.”

The garrulous Newt Gingrich, a Trump surrogate  whose wife is the U.S. ambassador to the Vatican, weighed in with, “President Trump must clarify his statements in Helsinki on our intelligence system and Putin. It is the most serious mistake of his presidency and must be corrected—immediately.’’

In his mind, the trip was a complete success. Trump complained that his critics are suffering from “Trump Derangement Syndrome.”

There are two big countries Trump has avoided criticizing for trade or defense spending: India and Russia. We understand the reluctance to speak critically of the Russians, as oligarchs have     laundered billions of rubles into dollars through his real estate holdings.  He has ignored India, perhaps because these other issues are preoccupying him. Prime Minister Narenda Modi can be thankful for that.

Trump’s book, The Art of the Deal, describes his business approach to   renegotiating contracts when payment  is due: Argue and then advise contractors  to sue. At one point he had amassed 3,000 lawsuits. He gave the same advice to British Prime Minister Theresa May in her dealings with the European Union over the UK’s Brexit. “Sue them,” he said. Trump belittled her in a newspaper interview and then claimed it was fake news, despite a recording of the interview.

NATO leaders were aghast at his statements about member payments, because no one pays the US for “protection” but, rather, military spending is pegged to each nation’s Gross Domestic Product (GDP) index. Trump unilaterally announced everyone had agreed to a 4 per cent goal for this, but French President Eammanuel Macron told NATO colleagues no such deal had been discussed, that 2 per cent of GDP remained operative.

Trump seems to neither care nor understand that NATO was an American security pact after the Second  World War  in response to the way the Soviet Union gained dominion over much of eastern and central Europe. It helped stabilize Europe, ultimately contributing to the end of the Soviet State.  Trump barked a word salad of hate and a lack of understanding toward many European leaders, but especially at German Chancellor Angela Merkel, who having grown up in East Germany’s Soviet system, speaks  Russian and understands its political life.

The masterpiece moment of the week may actually have been the large inflated balloon shaped as an unflattering baby that was flown near both his London stops and his visit to his golf club in Turnberry, Scotland. The balloon idea was approved by London Mayor Sadiq Khan, whom Trump previously criticized. Karma can be such a wonderful thing. One supposes that US VP Mike Pence wasn’t trying to be ironic when he said, “What the world saw, what the American people saw, is that President Donald Trump will always put the prosperity and security of America first. 10/10, a masterpiece.”

Call it Peace, or call it Treason

Call it Love, or call it Reason

But I ain’t marching anymore…

If American society is at war with itself, the November midterm election should answer the issue of who leads  the marching.