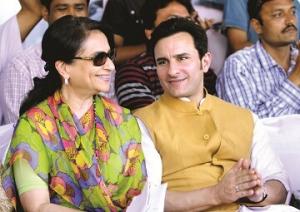 The immeasurable wealth of the last ruling nawab of Bhopal is mired in dispute. Does his famous grandson stand to lose it under the 1968 Enemy Property Act?

Film actor and heir to the state of Bhopal, Saif Ali Khan, might lose his ancestral properties worth several hundred crores if the Union home ministry deci-des to derecognize him as the true inheritor of the last nawab of Bhopal, the late Hamidullah Khan. On February 16, the Custodian of Enemy Property for India (CEPI), a Mumbai-based office under the Union Ministry of Home Affairs, issued a notice to Saif to prove his claim over the royal inheritance of the last nawab. It asked him to produce a copy of the merger agreement signed between the Union government and Hamidullah Khan in 1949 to buttress his claim. If the Chhote Nawab fails to do so, CEPI may initiate the process to appropriate his assets in the erstwhile Bhopal state under the 1968 Enemy Property Act, which was promulgated after the Indo-Pak war of 1965.

This Act empowers CEPI to appropriate properties in India owned by Pakistani natio-nals and authorizes the Union government to appoint a custodian for enemy property in India and one or more deputy/assistant custodians. The Act covers Pakistani nationals who were citizens of undivided India before Partition in 1947 and left the country to settle in Pakistan.

The flag Staff House in Ahmedabad, One of the bones of contention in the Pataudi Household

While Sharmila Tagore is keen to settle the dispute over Flag Staff House in Ahmedabad, her son Saif and his wife Kareena have so far prevailed upon her.

The CEPI notice to Saif is based on the contention that Abida Sultan, Nawab Hami-dullah Khan’s eldest daughter, was his successor. Since she migrated to Pakistan in 1950, a year after the merger agreement was signed, her father’s estate became “enemy property”.
Hamidullah Khan (September 9, 1894- February 4, 1960) was the last ruling Nawab of Bhopal state before it merged with Mad-hya Pradesh in 1956. He ruled from 1926, when his mother, Begum Kaikhusrau Jahan Begum abdicated in his favor, till 1949. The Nawab had three daughters—Abida, Sajida and Rabia. Abida migrated to Pakistan and her son, Shahryar Khan, later became Pakistan’s foreign secretary and chairman of the Pakistan Cricket Board.

However, the inheritance process was not acceptable to Sajida’s mother and two sisters —Abida and Rubia Sultan. They challenged her ownership of the nawab’s properties in Madhya Pradesh High Court in 1972. They also filed another civil suit in 1974 to challenge the coronation of Sajida’s son and former Indian cricket team captain Mansoor Ali Khan Pataudi as Bhopal nawab.

At that time, it was the fourth largest pro-perty dispute in India in terms of value of assets involved. Ironically, the cases are still unresolved even though all the original petitioners are dead. Tiger Pataudi died in June 2011. Abida’s son Shahryar Khan gave up his claim, but Rubia Sultan’s descendents are still fighting to claim their share in the royal assets.

Meanwhile, on February 25, CEPI infor-med Madhya Pradesh’s Principal Secretary (revenue) Radheshyam Julania through a letter that it was vesting Hamidullah Khan’s estate with its office. It asked collectors to prepare a list of properties across the state that would qualify as enemy property. It also asked collectors to take over the control and management of such properties. Julania confirmed receiving the letter, but declined to comment on what action is being taken.

Meanwhile, on April 6, Saif moved the MP High Court against CEPI’s February 16 notice. His lawyer, Rajesh Pancholi, says that the notice is based on an erroneous assumption on the part of CEPI.

Another legal expert, NC Das, says CEPI has assumed that Abida, being the eldest, would be the successor to Nawab Hamidu-llah Khan. However, she migrated to Pak-istan while the Nawab was alive. “During his (nawab’s) lifetime, Sajida had been declared heir presumptive and after his death, she was recognized as the successor by the Union government under Article 366 (22) of the constitution,” he explains. Das, incidentally, is counsel for the successors of the Nawab’s third daughter, Rabia Sultan, who died in Bhopal.

Defenders of Saif also point out that the Bhopal district court, through a ruling in 2000, had recognized Begum Sajida Sultan, and not Abida Sultan, as the successor to her father. Moreover, the CEPI had also sent a notice to Saif on December 19, 2014, identifying him as the successor to the estate of the Nawab of Bhopal since 2011.

Sajida Sultan had bequeathed her inheritance in Bhopal, along with the title of nawab, to her son Mansoor Ali Khan aka Tiger Pataudi. After his death, Saif was part of a coronation ceremony at Pataudi, where he was declared the nawab. However, the Pataudi family studiously avoided any such a ceremony in Bhopal.

Till Sajida’s death in 1995, there was no dispute among her children. However, later, her children— Mansoor Ali Khan and his two sisters, Saleha, 71, and Sabiha, 69, got embroiled in a legal battle for the property. The sisters live in Hyderabad.

In August 2003, additional district judge of Bhopal, Jagdish Baheti, passed a preliminary decree finalizing a formula to divide the nawab’s property among the three siblings. The decree, based on the Shariat, decided that Tiger Pataudi would get a 50 percent share, while the rest would be divided between his sisters.

However, the dispute is far from being resolved. Saleha Sultan’s counsel, Vineet Godha, has made it clear that the compromise formula is not acceptable to his client. Meanwhile, Sabiha’s lawyer, Jagdish Cha-vani, argues that owing to non-availability of valid records, division of the property among the siblings is not possible.

In 2005, Sabiha filed another suit in the district court in Bhopal to claim a share in the Flag Staff House, a sprawling 10-acre property in the palace area in Ahmedabad. It once housed the secretariat of the erstwhile Nawab of Bhopal. In 2008, yet another suit was filed in a Bhopal court asking Pataudi to clarify the “position” of the Flag Staff House as to whether it was sold or not.

After the demise of Tiger Pataudi in 2011, his wife, Sharmila Tagore, alias Ayesha Begum, tried to settle the dispute out of court. But her overtures did not cut ice with her sisters-in-law.

Sharmila Tagore finally decided to dispose of the disputed properties and share the proceeds with her sisters-in-law’s families. She came to Bhopal in December last year with this intention and stayed for four days. But the stalemate continued.

According to sources close to the royal family, Sharmila was keen to sell off the disputed Flag Staff House, but her son Saif and daughter-in-law, Kareena Kapoor Khan, prevailed over her not to dispose of such a valuable asset of great historical significance. It includes 15 residential properties and 23 cottages which were listed in the merger agreement as “private properties” of the nawab and estimated to be worth several hundred crores. Some properties are located in Raisen and Sehore districts of Madhya Pradesh, which were part of the erstwhile Bhopal state. The total assets are spread across 2,000 hectares.

On February 25, CEPI asked collectors to prepare a list of properties across Madhya Pradesh that would qualify as enemy property and asked them to take over its control and management.

Land records of the Bhopal district administration reveal that the state government bought hundreds of hectares in the Sixties that were registered in the name of Begum Sajida Sultan. Several important government buildings in the state capital such as power stations of the Madhya Pradesh State Electricity Board, MP Housing Board colo-nies, colleges, schools, etc, were built on land bought from the royal family.

Getting full ownership of this enormous wealth will be a major hurdle for Saif.