‘India Legal Research Foundation (ILRF)’ is a registered body under the Trust Act under which India Legal Academy and India Legal magazine  fulfil dreams of thousands of aspirants, who want to excel in the filed of Advocacy, Law Officers and Judicial Services to fulfil their goals.  The ILRF Team consists of most reputed legal luminaries including its Chief Patron, Former Chief Justice of India, Hon’ble Mr Justice MN Venkatachaliah, who provides active guidance for coaching law students aspirant of joining Judicial Service besides advocates practicing law and or serving in various important services.

Some of the salient features of our Academy 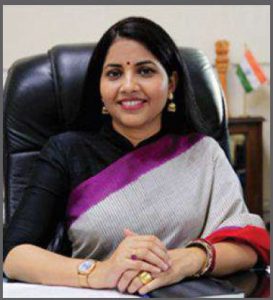 Rajshri,  MD & Editor-in-Chief, ENC & APN Channel, has over 17yrs of experience in journalism. She started her career in 1997 from Hindustan Times and later on moved to NDTV as reporter, producer & anchor and virtually became face of the channel. MsRajshriRai being a Law Graduate could link journalism with law. During 2007, she established her own media house Entertainment and News Communications (ENC) and APN News Channel. She was also the advisor for Former President of India, MrsPratibhaDevisinghPatil& contributed a critical role in strengthening the relations between India and UAE, for which, she was honored by the UAE Govt during 2010.

During 2014, she started Swatch Ganga Padyatra and continued the same for 9 months, where a lot of international personalities and celebrities had joined hands. During 2016, she along with South Korean Government contributed for drafting Charter for the World Peace & Anti War World, which is accepted by UN Charter for Peace. As she hails from Purvanchal, Bihar initially she facilitated lot of students though India Legal for Civil Services & Judicial Services Examinations for Purvanchal Areato score high merits in Preliminary & Main Exams, which is now extended to the whole of India. She is the first and youngest entrepreneur, who heads a TV Channel, Digital platform for Legal issues, India Legal Magazine and Judicial Conclave to promote premier legal education, which has helped so many students to join Indian Judicial Services.

Bharat Nagar a law graduates besides  having Master  Degree in Management, who joined Legal Profession during 1990s, initially as Corporate Law Advisor and later on shifted to litigation, having regular court appearances. Although he  had occasions to advise or appear for most of the big corporates like Relienance, Birla, Usha, 14 Nationalized and Foreign banks but came to limelight when he was appointed the main counsel for Amitabh BachchanCorporation Ltd. before Board for Industrial and Financial  Reconstruction (BIFR), in various High Courts and Supreme Court. Besides corporate advisory work and legal practitioner, he had delivered numerous lectures for Federation of Indian Chambers of Commerce and Industry (FICCI), Indo- American Chamber of Commerce (IACC), PHD Chamber of Commerce, Associated Chamber of Commerce (ASSOCHAM) and various other Bar Associations from time to time. Presently he is additionally writing various columns for many magazines and delivering lectures on various subjects for law students, preparing for Judicial services, which has proved very useful in the recent past. He is multi dimensional personality besides being hard task master, who believes in famous saying ‘If you want to shine like the sun, then you have to burn like sun’.

Extremely talented Apoorv Sarvaria being from a family, where his father, grandfather and sister are judges, was made  to appear in Delhi Judicial Services Exams to fulfill family tradition immediately after completion of his LLB and LLM at the age of 23yrs, where he cracked the Delhi Judicial Services Examination and became a judge at a very early age and served in Patiala House, Tis Hesari and Rohini Courts in Delhi as a Civil Judge. Metropolitan Magistrate, Additional Co-ordinator , Delhi International Arbitration Center in Delhi High Court besides being posted as Nodal Officer in Delhi State Legal Services Authority. However for his personal reasons, he resigned from judicial services after serving for 6 yrs.

From early days as a law student, Mr Apoorv Sarvaria had an interest in research & academics and was associated with editing many legal commentaries including Mulla’s CPC, Mulla’s Registration Act, Nelson Indian Panel Code, Civil Criminal Law books. He had also assisted in Halsbury’s Laws of India series and Halsbury’s Laws of India series in Criminal Law & procedure. Having inclination, he keeps writing articles for different law journals. He is also associated with Taxman for commentary on Insolvency &Bankruptcy Code. Presently he is teaching in Indian Law Institute and Delhi Judicial Academy meant for Judges. His core subjects are Civil Laws, Commercial Laws, Insolvency  &Banking Law, Insurance law, Arbitration and Cyber Law.

Did you find apk for android? You can find new Free Android Games and apps.
© Copyright 2020 IndiaLegallive.com