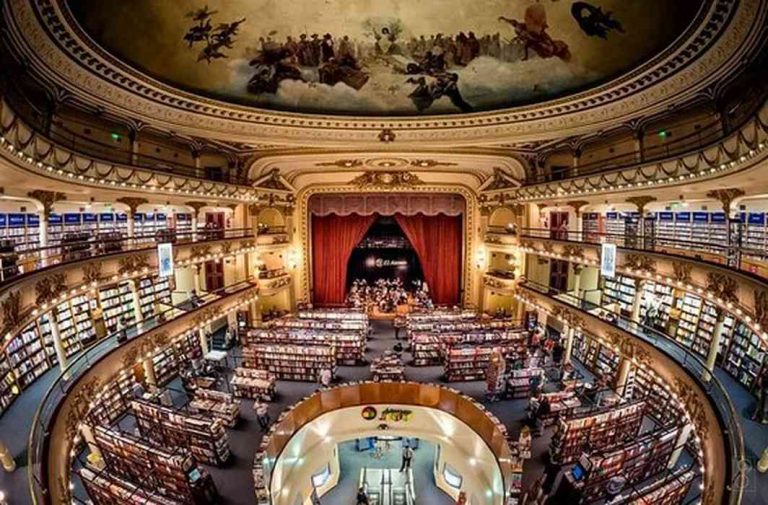 Step into El Ateneo Grand Splendid in Buenos Aires, and you could be forgiven for thinking you have entered the hushed and elaborate environs of a magnificent theatre. That’s because it was once a theatre and is now a bookstore but no ordinary one. According to National Geographic, it was ranked as the “world’s most beautiful bookstore” in 2019.

While books line the ornate walls, the building features ceiling frescoes painted by famous Italian artist Nazareno Orlandi and sculptures by Troiano Troiani, offering a stunning vista. Many of its original architectural details remain intact, from the stage to the balconies and eye-catching ceiling frieze.

It first opened as a theatre in 1919, the most celebrated in Argentina. The theatre had a seating capacity of 1,050 with acoustics to match. The El Ateneo publishing house bought it over and converted it into a bookstore in 2000, conserving its original grandeur, but replacing seating with bookshelves. The bookstore still boasts plush crimson curtains and the original stage is now a cafe where people-watching is a popular pastime. The 22,000 sq ft space is now the group’s flagship store, and over a million people, including tourists, walk through its doors annually to witness for themselves the most beautiful bookstore on the planet.

There’s a new rulebook being distributed to leaders of prominent groupings: look before you speak. Though a current joke, the reference is to the hidden microphone and the embarrassment it caused at last week’s NATO meeting where some leaders in a huddle led by Canadian Prime Minister Justin Trudeau appeared to be poking fun at US President Donald Trump, forgetting that a microphone nearby was live. There have been similar instances in the past and no one seems to have learnt this obvious lesson.

At a G20 summit in France, then Presidents Nicolas Sarkozy and Barack Obama were having a backroom chat. Journalists present overheard Sarkozy complaining to his US counterpart about Israeli Prime Minister Benjamin Netanyahu. “I can’t stand him anymore, he’s a liar,” said Sarkozy. “You may be sick of him, but me, I have to deal with him every day,” replied Obama.

Another French President, Jacques Chirac, caused a strain in UK-France relations after he made comments during an official trip to Russia. Not realising a microphone was picking up his conversation, he said: “You can’t trust people who cook as badly as that. After Finland, it’s the country with the worst food.” He was talking about Britain and he added: “The only thing the British have ever done for European agriculture is mad cow disease.”

The most serious hot mic leak almost started a war when in 1984 then US President Ronald Reagan stated: “We begin bombing in five minutes.” This was at the height of the Cold War. Reagan was doing a sound check before a radio address and said jokingly: “My fellow Americans, I’m pleased to tell you today that I’ve signed legislation that will outlaw Russia forever. We begin bombing in five minutes.”

A recording was leaked to the public and Soviet forces were temporarily put on high alert.

Step into a car showroom and models in every colour greet the eye—from twilight purple pearl to volcano red, sahara silver, black magic and race metallic blue, to name just a few. However, despite these snazzy variants, car buyers across the world seem to prefer the most boring of colours—white. The second and third preferences are black and grey. This is according to the latest annual Global Automotive Colour Popularity Report.

The real surprise: White has been the world’s favourite automotive colour since 2011. Silver used to be among the top three but it dropped out this year, with grey rising in popularity.

Basically, four colours—white, black, grey and silver—dominate the automobile population, representing 80 percent of market share globally. The demand for grey has been the maximum among SUV and sports vehicle owners.

In Europe, grey overtook white as the favourite while elsewhere white continues to lead the market, with Asia having the widest popularity spread at 49 percent.

In India, 33 percent have voted for white—26 percent for solid white and seven percent for pearl white. Silver with 31 percent is a close second, followed by grey with 12 percent.

Word of the Year

Dictionary.com has just announced its Word of the Year. It is “Existential”. The word was primarily searched in conjunction with climate change, gun violence and democratic institutions, Dictionary.com said.

Existential has two meanings: “Of or relating to existence” and/or “concerned with the nature of human existence as determined by the freely made choices of an individual”.

The post accompanying the announcement by the website explained why “Existential” made the cut: “It captures a sense of grappling with the survival—literally and figuratively—of our planet, our loved ones, our ways of life.” It went on to add: “Existential also inspires us to ask big questions about who we are and what our purpose is in the face of our various challenges—and it reminds us that we can make choices about our lives in how we answer those questions.”

Despite the word’s negative connotations, Dictionary.com said that “existential” has also helped people cope. It opened the post with a nod to “Toy Story 4”, in which a spork named Forky has an existential crisis.

Vice President Joe Biden also gave the word a boost when he said that President Donald Trump “is literally an existential threat to America”.