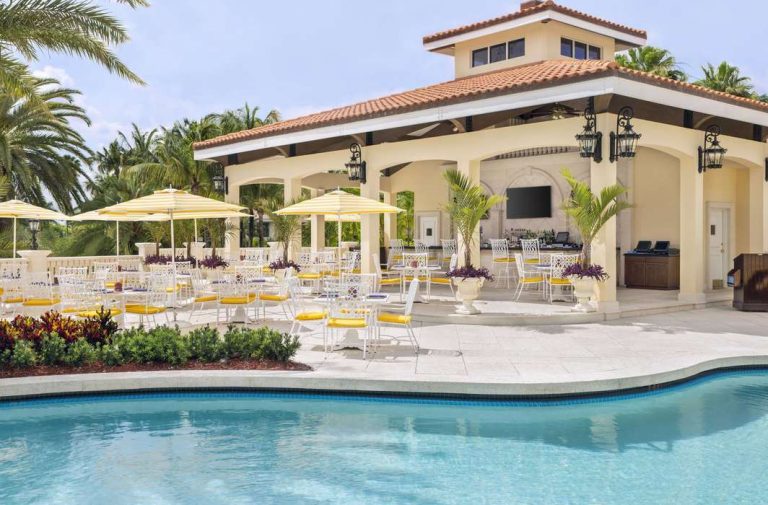 US President Donald Trump’s audacious idea to host the next G-7 meeting at his own resort in Miami was typical of the real estate tycoon but now that he has withdrawn after a storm of protests, the issue has focused attention on one of the most ambitious and controversial projects under the Trump banner.

If it had gone through, G-7 leaders would have come face to face with a six-foot-high portrait of Trump painted by a local artist which acquired notoriety after it was discovered that it had been bought for $10,000 with funds from the supposedly non-profit Trump Foundation. The painting hangs in a prominent spot in the resort. The Trump Organisation bought the Doral Resort & Spa for $150 million in 2012, and it was renamed Trump National Doral.

Set in an oasis of luxury in the heart of Miami, it is a spectacular five-star resort with 693 guest rooms and suites, six pools, four restaurants, four golf courses, a spa centre, conference rooms and ballrooms. The resort occupies 800 acres.

In May 2019, it was reported that the resort was in “steep decline” financially, when its net operating income had fallen by 69 percent—from $13.8 million in 2015 to $4.3 million in 2018. Trump has also been sued by dozens of contractors who worked on the renovation project. In 2016, a Miami-Dade County Circuit Court judge ordered the resort to be foreclosed and sold unless the Trump Organisation paid $32,800 to a Miami paint supply company, which it did. Ever since Trump purchased the resort, he has challenged local property tax assessments every year. In 2017, the resort settled a lawsuit from a guest whose back, face and arms were bitten by bed bugs.

Doral is the only golf resort in Florida to boast four onsite 18-hole courses—The Blue Monster is the jewel in the crown, having regularly hosted prestigious PGA Tour events. The guest rooms and suites at Trump Doral are located in villa-like lodges adjoining the main clubhouse, surrounded by stunning tropical landscaping. The lodges, where the G-7 leaders would have stayed, feature connected rooms, private balconies, luxury fittings and total privacy. Downtown Miami is less than 30 minutes away.

Each year, Lonely Planet publishes its Best in Travel guide, based on inputs from travel writers, social media influencers and a panel of travel experts. The latest lists the 10 countries and cities chosen for their “wow” factor for 2020.

Leading the list is India’s neighbour, Bhutan, chosen for its strict “high-value, low-impact” tourism policy. Visitors get a chance to walk along mountain trails unsullied by litter and in the company of people whose Buddhist beliefs put them uniquely in tune with their environment. Bhutan is already the world’s only carbon-negative country and the kingdom is set to become the first fully organic nation by 2020. So it’s only going to get more beautiful. And with a daily fee, it won’t be getting any more crowded.

Number two on the list is England. A bit of a surprise but the guide rates it highly for the English coastline, with wind­swept piers, delicious fish and chips, and picturesque beaches. The England Coast Path will open in 2020 and will cover 3,000 miles, the longest continuous trail of its kind in the world, granting access to the country’s entire coastline for the first time.

Next on the list is North Macedonia, bordering Greece. The tiny nation in the heart of the Balkans is already renowned for gastronomy, ancient tradition and natural beauty.

Close behind is Aruba, which is experiencing a creative revival, with international and local artists adorning street walls and pop-up carnivals. Aruba is also into sustainability to maintain its palm-fringed and pristine beaches.

Swaziland makes the list with its culture, adventure and legendary wildlife while Costa Rica comes in next, rated high for sustainable tourism. Costa Ricans understand the importance of preserving their slice of tropical paradise. Ninety percent of the country’s energy is created by renewable sources, and it could become one of the first carbon-neutral countries in 2020. The catchphrase pura vida (pure life) is more than a saying; it’s a way of life.

Number seven on the list is the Nether­lands, with its stunning cities and over 35,000 km of cycling paths to explore attractions beyond cities. Liberia is a bit of a mystery but it boasts idyllic beaches, and some of West Africa’s best surfing.

In the ninth place is an old favourite, Morocco, which is experiencing a revival with improved infrastructure and Africa’s first high-speed train which takes you from Casablanca to Tangier in just two hours. Ancient medinas are getting a makeover in historical places like Fez and Marrakesh, and it will be crowned Africa’s first Capital of Culture in 2020 in celebration of its rich heritage. Rounding it off is Uruguay, with its Atlantic shoreline, a burgeoning wine industry, bubbling hot springs and endless open spaces of the pampas.

Other top performers include Gucci and Adobe. The combined total value of the Top 100 is $2,130,929m, an increase of 5.7 percent from 2018. The report says that for decades, “the discipline of brand-building was based on the concept of brand positioning, but in today’s accelerating markets, customer expectations outstrip static brand positions”.