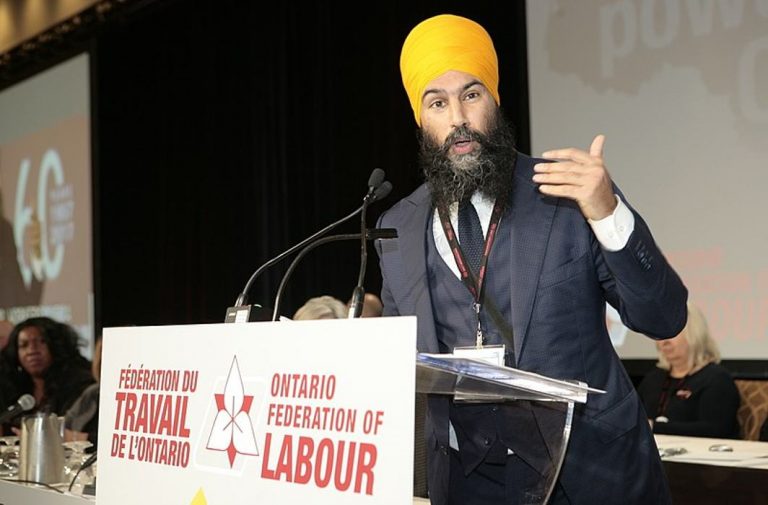 The “Blackface” scandal that has engulfed Canadian Prime Minister Justin Trudeau can revive the fortunes of a Brownface, Jagmeet Singh, who was heading for political obscurity. Singh, who made history as the first minority leader of a Canadian political party, the New Democratic Party (NDP), was seen as an also-ran in next month’s general election in Canada, but his response to Trudeau’s embarrassing yearbook photos may just give his party the boost it needs to take on Trudeau’s Liberal Party.

In fact, Singh, who is a familiar face in Canada, is ideally placed to gain the most from the scandal. The latest polls show the NDP is unlikely to win, but could gain enough votes to play kingmaker. The polls show Trudeau’s Liberals and the Conservatives in a tight race and Singh could win enough votes to make a deal with the Conservatives and bring them to power. The latest polls show Singh up four percentage points from last week, while Trudeau lost four points in the same period.

It’s probably the first time that a chef has sued the “Bible of the food industry”, the Michelin Guide. The chef is, predictably, a Frenchman, Marc Veyrat, who went to court after his world famous restaurant, La Maison des Bois (The House in the Woods), lost one of its highly coveted stars.

The restaurant, in a mountainside town in the French Alps, is known for its modern cuisine and earned the highest three Michelin Guide stars in February 2018. However, the next year, Veyrat discovered that his restaurant had lost one of its stars.

Veyrat has now filed a civil case against the famed restaurant guide for “the exact reasons for the downgrading”. According to ABC News, his lawyers issued a statement saying: “Veyrat knows well that Michelin stars are not awarded for life and that one must strive for perfection each day. He can accept anything, as long as the criticism is accurate and well-founded.”

The Guide, says the BBC, downgraded his restaurant after one of its secret diners reported that he had served cheddar cheese in his classic French cheese soufflé, instead of the French-made Reblochon, as claimed in the menu. Chef Veyrat, 69, told France Inter radio that he was “dishonoured” by the anonymous Michelin inspector. “I put saffron in it, and the gentleman who came thought it was cheddar because it was yellow.” A court hearing has been set for November 27. The Michelin Guide gives its highest three-star accolade to restaurants that are “worth a special journey”.

Voice in the Wilderness

He is perhaps the most famous opera singer of all time after the passing of Luciano Pavarotti, but is now the most infamous, thanks to a flood of accusations by women about his being a sexual predator, going back decades.

Tenor Plácido Domingo, one of the famed Three Tenors, which includes Pavarotti and fellow Spaniard José Carreras, may have come to the end of his glittering career when the Metropolitan Opera, or the Met, recently ended its relationship with him. He was scheduled to sing the title role in the Met’s production of Verdi’s Macbeth as well as pay four lead roles in Madam Butterfly in November.

Domingo still denies the allegations but admitted that his 51-year-old relationship with the opera house was over.

Several other opera companies had already cancelled his concerts after a total of 20 women accused the singer of harassment, inappropriate sexual behaviour and of using his position in the industry to harm their careers if they rejected him. Their claims were published in two reports by the Associated Press.

The Met decision will see the opera stage minus Domingo’s towering presence and powerful tenor. He is one of the most successful and versatile opera singers in history, having recorded over 100 complete operas, including commercially successful collaborations with pop stars and has performed all over the world. The first recording by the Three Tenors is the biggest-selling classical album of all time.