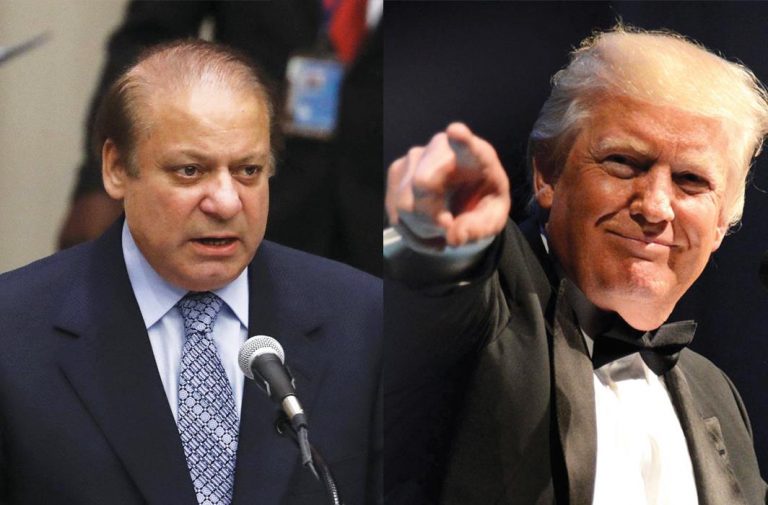 Above: Pakistan’s Nawaz Sharif (left) gets a rebuff from US President Donald Trump (right). Photos: UNI

Though the Trump Administration has blocked $350 million aid to India’s neighbour, it is not in a position to completely abandon it until the situation in Afghanistan stabilises

Much is being made of the Trump Administration’s decision to cut back on the $350-million funding to Pakistan as reimbursement for its efforts in helping in the war on terror. The reason is because of Pentagon’s assessment that the country had not done enough to rein in the Haqqani network, responsible for major terror attacks in Afghanistan. The Haqqani brothers have always been known to be close to Pakistan’s deep state.

“The funds could not be released to the government of Pakistan at this time because the secretary could not certify that it has taken sufficient action against the Haqqani network,” Adam Stump, a Pentagon spokesman, was reported by the US media as saying.

It is mandatory for the US Secretary of Defense to verify that the funds previously allotted have been used by Pakistan for the purpose they were given. As punishment for lack of progress, the $350-million fund was stopped.

The argument is that the Coalition Support Fund, which reimburses Pakistan for its support of US military operations in Afghanistan, cannot be approved as it has not done enough. With Donald Trump supporting a transactional relationship and Pakistan not willing to fulfill its part of the bargain, the US has now pulled out of its commitment. Indeed, this is very businesslike and in keeping with what one expects from this president.

Does this mean a change in US policy towards Pakistan? Is this the first step towards a major new policy initiative from the US government? It is hard to say. The Trump Administration is in the process of reviewing America’s Afghan policy and Pakistan will figure prominently in that.

Many in India are hoping that Islamabad, more so the Pakistan defence forces which had long had close ties with the Pentagon, will be given the short shrift. Will this hurt Pakistan and make it go after the Haqqani group? Not really because Rawalpindi believes that pro-Pakistan groups such as the Haqqani network are vital to its security as it gives its military much-needed leverage in war-torn Afghanistan, which is in its backyard. If Pakistan’s army wants funds to continue flowing from Washington, it may ask the Haqqanis to lie low for sometime but this will not be permanent as it will hurt Islamabad’s strategic interests. When and if a final political settlement is worked out in Afghanistan, Pakistan wants to ensure that a friendly anti-India government is installed.

But no US Administration can ignore Pakistan so long as American troops remain in Afghanistan. It is a fact that the cozy relations Pakistan shared with America are long over. Ties have been testy ever since US discovered that the Pakistan military has been quietly helping the Haqqani network to work against US interests. Pakistan’s spy agency, the ISI, is hand-in-glove with several terror groups and uses these outfits to work against the US whenever it needs to. Many top US generals hold the ISI, working through its favourite outfit, responsible for the death of American soldiers in Afghanistan. Yet, it is in no position to abandon Pakistan altogether.

Former foreign secretary Lalit Mansingh told India Legal: “The reduction of funds, at best, serves notice to Pakistan to do more to curb the activities of the Haqqani group, responsible for several lethal attacks in Afghanistan, including, it is now suspected, the strike in the diplomat area of Kabul. However, it is nothing more than a gentle rap on the knuckles as the US is not in a position to completely abandon Pakistan until the situation in Afghanistan stabilizes and all US troops are out of there,’’ he added. Mansingh was also India’s ambassador to Washington.

Rakesh Sood, former Indian envoy to Afghanistan, also believes that withholding $350 million to Pakistan will not change the situation on the ground in Afghanistan. “Pakistan will play the blame game saying the US is an untrustworthy ally and has failed to recognise the sacrifices of the Pakistan armed forces in Washington’s war against terror.’’ He also acknowledged that with a more assertive China’’ watching from the periphery, Pakistan is doubly sure of support.

While this would have severely strained Pakistan’s finances in the past, today, the impact will be much less. China, the emerging superpower, is gradually replacing the US at least in this region. Pakistan and China have always been all-weather friends, but with the China Pakistan Economic Corridor (CPEC), the bonds are closer. It is not just that Pakistan needs China’s money and expertise, but Beijing is equally dependent on Pakistan to make its ambitious One Belt One Road (OBOR) Initiative a success.

One of the most ambitious projects so far announced under OBOR is the CPEC. The Gwadar port in Sindh is vital for the success of China’s plans to find an alternative outlet for import of oil, gas and other minerals. Gwadar will also help to finally establish Chinese military presence in the region. It is of strategic and economic advantage. “Earlier too, China had stood by Pakistan, helping its nuclear and missile programmes. But with CPEC, the economic dimension has also kicked in, making the relationship rock-solid,’’ said Mansingh.

What does all this mean for India? It is good as more and more countries recognise Pakistan’s role in spreading terror. In fact, in its Country Report on Terrorism, the US government echoed what India had long been saying—that Pakistan provides “safe havens’’ to terror groups, including anti-India outfits like Lashkar-e-Taiba and Jaish-e-Mohammed. The very fact that the State Department mentioned LeT and Jaish shows how far Washington has come from its earlier position. In the past, the US had turned a deaf ear to India’s charges against Pakistan’s role in terror attacks, both in Kashmir and other soft targets in India. But now, Washington has gone so far as to acknowledge that India has accused Pakistan of encouraging terror strikes in Kashmir.

However, this accommodation should not make Delhi complacent. Though the Haqqani network was responsible for attacks on Indian interests in Afghanistan, Delhi’s main concern is the LeT and Jaish. How far the US will go to support India remains to be seen. In the joint statement, issued at the end of Narendra Modi’s successful visit to Washington, Kashmir was referred to as “Indian-administered Kashmir’’. Delhi would have gone ballistic if any other country had done so. The ministry of external affairs has not been able to come up with a suitable explanation as to why India agreed to the term. Lalit Mansingh says: “It is a small price to pay’’ for American goodwill.

Delhi is wary of President Trump’s unpredictable nature. The visit having gone well, no one wanted to quibble over a few words. India must not look to the US or any other power to serve its security concerns. It must ensure that terror attacks are minimised by taking charge of its security. Unless it does so, no amount of support from any other country, however powerful, will help. The US will serve only its own interest, as must India.