154,225FansLike
654,155FollowersFollow
0SubscribersSubscribe
Home Interview “Be Prepared to Suffer for a Greater Cause” 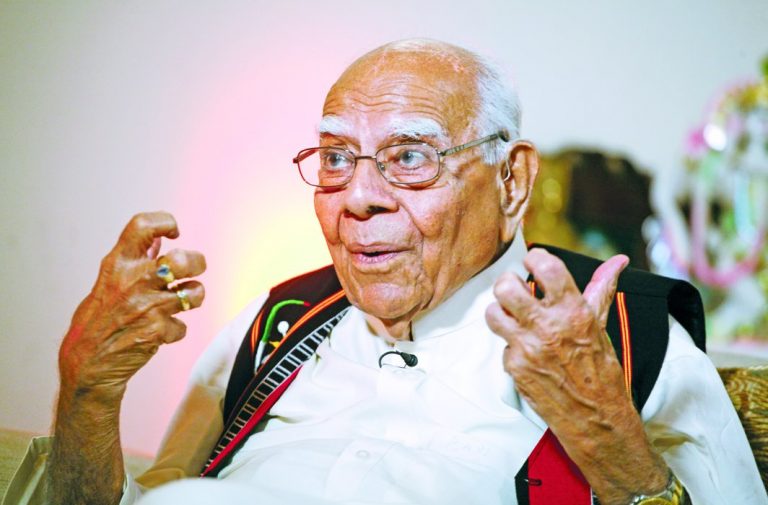 In September 2016, India Legal’s Managing Editor Ramesh Menon interviewed Ram Jethmalani for the magazine. The ageless gadfly spoke on a range of issues to do with the judiciary and the political system, which he was once a part of as a minister and an MP. However, after falling out with the prime minister and his team, he had turned exceedingly cynical and bitter as was in evidence during this interview. Excerpts:

Is the government subtly attempting to tell judges what to do?

Judges are experts in their field. They also need to know more things other than law. Judges must move. They cannot anymore afford to live in an ivory tower. They need exposure to other subjects. I have so much respect for judges despite some examples which make us lose our confidence. But compared to other branches of public life, judges are angels. This is my honest opinion of the Judiciary. The Executive has its own way of working so judges should know the other side.

There has been much talk about black money. Do you think the government is really serious about bringing it back or was it just an election time slogan?

You can get black money back into India only if you are serious. You are shielding the culprits. This fact has been concealed from the people of India: The Germans paid $475 million bribe to an employee of a bank who gave 1,400 names of those who had stolen national wealth and put it in a bank. The Swiss Bankers Association said that the majority of the names are from India and are prepared to disclose it. The German government in 2008 said that it was ready to give the names to any government without a cost. Why didn’t the BJP or the Congress governments ask for it? They did not want anyone to know who the thieves were. Germany said that some prominent person from India must ask for it. I went to Germany and met officials there who told me that there was no request from India to reveal the names. I came back and wrote a two-line letter to LK Advani saying that India needed to send a letter to the German government and ask for the names. Two weeks later, I called him and asked why he had not sent the letter. He just said that he forgot. I cannot believe that excuse.

Using a Supreme Court order, I demanded to see the correspondence between India and the German government. They did not respond for a year. Then I found that the Indian government had only corresponded with a tax office there that deals only with honest taxpayers who pay taxes in two countries—where they belong to and where they work! This is the only correspondence they had. They had scored out the names of the authors and the addresses of the letter they sent with indelible ink. People must see that those responsible should go to jail. Their only hope is that Ram Jethmalani will die.

When the election results came in, I wrote in The Sunday Guardian: ‘Dear Mr. Modi, Congratulations on your success. I am now living in the departure lounge of God’s airport so now fulfill the promise you have made.’ I am now ashamed to say that this man was unworthy of my friendship and confidence.

How can one really bring back black money?

The Indian nation is battling corruption. It is really a difficult task. I am 93 and short of time. If I have another three to four years, I may be able to show you something. I have had 75 years in the Bar. Modi succeeded in cheating me on the black money issue. He said that he would get Rs 15 lakh into the account of every Indian as he would bring back black money.

You campaigned for Nitish Kumar in the Bihar elections.

When Nitish requested me to campaign for his party, I told him that I was 93 and could not do that. But I said that if he called two meetings, I could come and address them and then he could see the result. I went to Bihar and told the people that I would vote for Nitish. I told them that I was an educated man with 75 years in the Bar dealing with all kinds of rogues and rascals but Modi had succeeded in cheating me on the black money issue. I begged for their forgiveness for having worked to make Modi win the Lok Sabha elections. What happened in Bihar to the BJP will now happen in every state. I challenge Modi to prosecute me for defamation. I will answer him in court.

What is the ideal system of justice that you would want to see?

India desperately needs judicial reforms. What do you think needs to be done on a priority basis?

India needs to increase the number of courts and judges by 16 times. But, the government does not want to spend money on the judiciary and its infrastructure. That is why cases go on for so many years. It is a scandal. We do not have sufficient judges.

Just look at how our subordinate judges are functioning. Look at their salaries. Look at their living conditions and despite all temptations, they are working and I think they are doing a wonderful job. Judicial reform is not required. What is required is the reform of our politicians. Then everything will improve.

Pendency has been a serious issue. What do you think is the solution?

We can see how many have died in the course of a case. Witnesses die as the case drags on for years. I am now defending a Kashmiri who has been languishing in jail for five years. There are 119 witnesses. But only 25 of them have been examined till now. I requested the home minister to ask the public prosecutor to ensure bail for this client as he is innocent and is rotting in jail. I am waiting for the case to come up for hearing. Our problem is paucity of judges.

How do you think the NJAC will work out?

It was Modi’s bill and it was declared ultra vires. They wanted a minister to be involved in the appointment of judges. Why should a minister be involved? The biggest litigant in India is the government. How can a minister decide who should be the judge?

Women not being allowed into temples violate a fundamental right. In this age, how can we discriminate on the grounds of sex? Is it not contempt of court as women are still being prevented in spite of the Bombay High Court judgment?

It is stupid. Women are purer than men. If you have to prohibit anyone, it is the men who need to be stopped. What is the meaning of stopping women from entering a temple?

You are much more than a lawyer. During reflective moments, what is the kind of India that you want to see?

I want to see India in the comity of nations getting the respect of the world for the integrity of its politicians. That will happen only if there are honest people in power. This is all that is required. We have everything but we have neutralised everything with the wrong people being in power. We had great hopes from Modi. But he did not turn out to be a shining star as we thought.

How do you have so much of energy every day?

Every morning I do yogic exercises. I daily spend an hour playing badminton doubles. I play four sets and usually win all of them. I eat very little. For the last 12 years, I am a complete vegetarian. I do not have lunch. I enjoy two drinks in the evening. I sleep well. More than anything, I enjoy good company.

Is there anything you would like to say that I have not asked?

Stick to the truth and proclaim it. Be prepared to suffer for this great cause.