Home Interview “The Collegium is Here to Stay” 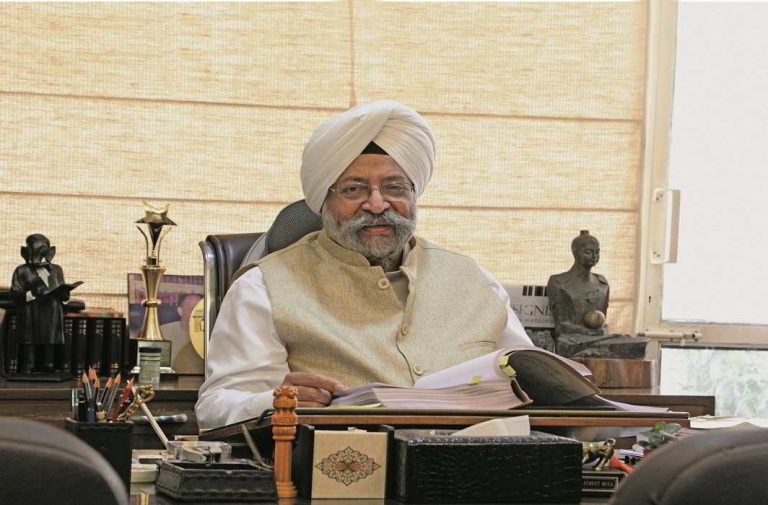 Senior advocate RUPINDER SINGH SURI was elected as the Supreme Court Bar Association president in December 2016. This alumnus of St Stephen’s College, Delhi, has been in the legal profession for four decades. He was counsel for Punjab in the Supreme Court during the years of Sikh militancy, was president of Advocates-on-Record Association and secretary-general, INSOL India, an association of members of the legal fraternity, chartered accountants, etc. He is an active member of the International Bar Association and was honorary secretary and later, vice-president of the SC Bar Association. In an interview to NAVANK SHEKHAR MISHRA, he says he supports an Executive nomination in the Collegium, though it is likely to be only a tertiary role, not a primary one. Excerpts:

The Collegium system has been as subject of debate. How do you perceive this system?

Till 1990, the Executive played an important role in the selection of judges. After that, thanks to the First Judges Case and the Second Judges Case, the Collegium came into full force. Only judges could select future judges. According to the constitution, the independence of judiciary is a must. And one important aspect of this is that they must have the right to select judges.

From 1990, the system worked very well. But due to some questionable appointments, a debate started whether the Collegium was the best authority to select judges. One point of view was that the Executive should also have a say in this selection. It’s in this context that a new act and amendment (NJAC Act and the 99th Constitutional Amendment) came into being, but a constitution bench held that this act and amendment were ultra vires. It said it would not compromise with the independence of the judiciary and that means that the Collegium system will continue.

However, the bench told the Executive to prepare a Memorandum of Procedure (MoP). An MoP has been prepared but it has again raised a number of questions as now every judge can nominate and recommend. So the final shape of the Collegium has not been firmed up. That said, the Collegium is here to stay. The Executive will only have a tertiary role, not a primary one.

Is there a lack of accountability and transparency in the present Collegium system?

There are two views on this. Justice Jasti Chelameswar has said there is lack of transparency. If the objective is to bring in complete transparency, then you should keep the minutes of various meetings. It can be quite harmful to the person who has not been selected. I don’t think our judicial institutions should be subject to RTIs and public debates. For the dignity of the office, I don’t think there should be so much record-keeping. Instead, there should be self-discipline in every Collegium member. They should also look into the trend of a judge’s son being given priority in appointments. “Uncle Practice” should be eliminated in totality.

A lot of money has been spent on the Yamuna and a number of sewage plants have been set up but, the net result is that the Yamuna does not have oxygen…. To expect a change in three months is not possible.

Was Justice Chelameswar right in airing his views in public?

I don’t know what will be the result of bringing this issue out in the public domain. Judiciary, as a whole, has lost face. And we can’t tolerate that.

How can the present Collegium system be reformed?

Don’t debar the Executive altogether. Judges, by their very work ethic, don’t meet too many people. So there is a likelihood of them not getting the correct feedback about certain persons. Executive nomination should be there.

MC Mehta had filed a petition in the National Green Tribunal regarding the Ganga Action Plan. What action plan should there be for its cleaning and proper utilisation of funds?

The cleaning of the Ganga came into focus after Prime Minister Narendra Modi came to power. It has been taken up on a priority basis and there was a cabinet decision to make a separate authority to supervise this. A budget has been allotted. But what is polluting the Ganga? It is domestic sewage and industrial waste. It is people defecating on its banks. To control this, there should be infrastructure such as sewage and effluent treatment plants, public toilets, etc. All this will take time. It’s not a press-button situation wherein an act is passed, a budget is sanctioned and then you start asking questions in court about what is happening.

I represented the Delhi Jal Board from 1990 onwards. A lot of money has been spent and a number of sewage treatment plants have been set up but in spite of the great job done, the net result is that the Yamuna does not have oxygen. There is no living organism. We can take lessons from this experience because the Yamuna is also a tributary of the Ganga. To expect a change in three months or one year is not possible. It will take time for the Ganga to get back its pristine glory.

This experience would also help other rivers, especially the Brahmaputra, which caters to the North-East. Clean water is part of Article 21 of the constitution. If you have a right to life, you are entitled to clean water and proper water management

What is your view on live-in relationships vis-à-vis the legal sanctity given by the Supreme Court?