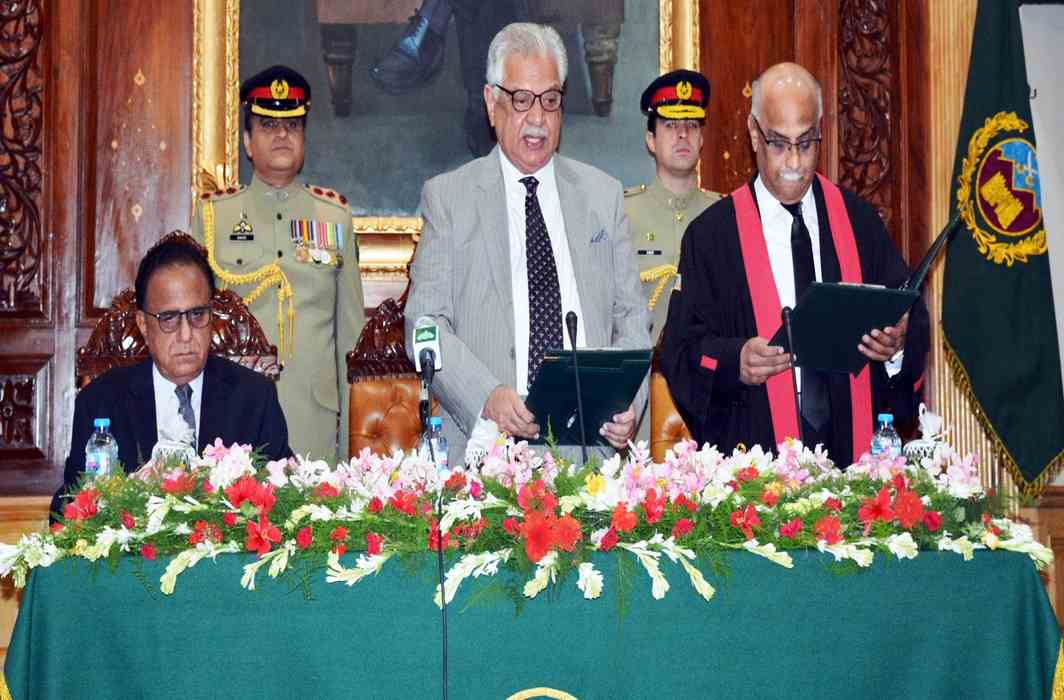 The attacks by Pakistan’s law minister and other officials against Justice Waqar Seth, who sentenced Gen Musharraf to death, may have handed India a new opening in the Jadhav case

In para 66 of the detailed judgment that sentenced former military dictator Pervez Musharraf to death, Justice Waqar Seth, the chief justice of Peshawar High Court and head of the special court, observed:  “We direct the law enforcement agencies to strive their level best to apprehend the fugitive/convict and to ensure that the punishment is inflicted as per law and if found dead, his corpse be dragged to the D-Chowk, Islamabad, Pakistan, and be hanged for 03 days.”

In doing so after reportedly finding the former general guilty of treason, Justice Seth may have just pushed the powerful Pakistan military establishment and the Imran Khan government into a tight corner.

His judgment provoked sharp criticism from both the army and the government. Law Minister Farogh Naseem, who had previously served as Gen Musharraf’s lawyer, said Justice Seth not only “violated judicial conduct” by issuing the “bizarre order” but also was “mentally unfit and incompetent” to be a judge of any court. He added that the government has decided to move the Supreme Judicial Council of Pakistan (a high-powered body that hears cases of misconduct against judges) with the plea “that such a judge has no authority to be a judge of any high court or the Supreme Court”.

Attorney General Anwar Mansoor Khan said that the sanity of the author of the detailed verdict in the Musharraf treason case is “questionable” and called for his trial and removal under Article 209 of the Constitution.

However, a few days later, the Imran Khan government decided against filing a reference against Justice Seth because it would have caused serious problems—both at the national and international levels.

At the domestic level, the move would have incurred a huge political cost and embarrassed Prime Minister Imran Khan, who had all along been a vocal supporter of an independent judiciary and as an opposition leader had vehemently called for Gen Musharraf’s trial for suspending the Constitution.

Apart from the political cost, there was a legal hitch as to how the government could challenge the special court’s verdict when it is the complainant in the case. Only the aggrieved party can file an appeal in the apex court for expunging remarks of the special court’s judge. Another question raised by legal experts was whether an appeal can be filed in respect of para 66 of the judgment, which is not the operative part of the majority judgment.

The major concern was that it would weaken Pakistan’s case against alleged Indian spy Kulbhushan Jadhav at the International Court of Justice (ICJ) at The Hague.

The ICJ, on India’s plea, had directed Pakistan to “take all measures at its disposal” to ensure that Jadhav would not be executed pending a final decision in the case, and to inform the court of all the measures taken in implementation of that order.

However, the ICJ did not uphold India’s submissions to direct Pakistan to take steps to annul the decision of the military court, release Jadhav and facilitate his safe passage to India. But it found that Pakistan was under an obligation to provide, by means of its own choosing, effective review and reconsideration of the conviction and sentence of Jadhav, so as to ensure that full weight was given to the violation of rights set forth in Article 36 of the Vienna Convention.

The ICJ’s decision to suspend but not annul the execution of the death penalty awarded to Jadhav and asking Pakistan to ensure “effective review and reconsideration of his conviction and sentences” was hailed as a victory in Pakistan.

However, the ICJ observed that Article 199, Paragraph 3, of the Constitution of Pakistan had been interpreted by the Supreme Court as limiting the availability of such a review for a person who was subject to any law relating to the armed forces of Pakistan, including the Pakistan Army Act of 1952. Here, Pakistan cited a decision of November 2018, where Justice Seth, as part of a two-member bench of the Peshawar High Court, had reversed sentences of the military courts against 74 convicts, 50 of which were death sentences, to stress that courts in Pakistan are independent and operate without any influence from the government or the military.

Mohammed Rizwan, a Toronto-based journalist of Pakistani origin, and a fellow at Pragmora Institute, Canada, told India Legal: “It helped Pakistan’s case as the ICJ did not annul Jadhav’s death sentence because Justice Seth’s verdict established that decisions by the military courts can be reviewed in Pakistan’s superior judiciary. Thus Jadhav is also free to file a review petition.”

The Imran Khan government made a laughing stock of itself when the law minister and attorney general of Pakistan questioned the “mental balance” of Justice Seth.

After 2009, the Pakistani judiciary has become robust and independent because of upright judges who have refused to toe the line of the military establishment, Rizwan told India Legal.

He said the Khan government did not realise the gravity of the situation when Justice Seth was nominated as presiding judge of the special court by the chief justice because Justice Seth had given numerous verdicts against the military. Recently, Justice Seth had declared as unconstitutional the functioning of scores of internment centres run by the army in Khyber Pakhtunkhwa (previously known as the North-West Frontier Province). Even as a sessions judge, he had taken up cases of “missing persons” despite death threats.

The incompetence of the government, compounded by the irresponsible remarks of senior officials, has given India valid reason to question whether Jadhav would get a fair trial in Pakistan. Now, India can make a plea that when Pakistan’s top civil and military officials are questioning the reliability and trustworthiness of their judiciary, how could it be trusted to give a fair trial to Jadhav, Rizwan said.

“How could you declare a judge mentally unfit when the ICJ had specifically mentioned his judgments in the Jadhav case,” Rizwan told India Legal.

This not only reflects on the administrative capability of Prime Minister Imran Khan, but also on the kind of advisers he has appointed.

“The Musharraf trial fiasco reminds me of the remarks made by the then chief justice of Pakistan Asif Saeed Khosa while hearing the extension of army chief Qamar Javed Bajwa where he reprimanded the attorney general and asked him to check whether degrees of officials working in the law ministry were fake or genuine,” he said.

It is up to the Imran Khan government to decide the top priority for it—to get the ICJ’s judgment in Pakistan’s favour and get Jadhav sentenced, or to remove Justice Seth?

He says it was a very difficult choice for the government to make. Although the military establishment and the Imran Khan government are very angry with Justice Seth’s observation in the Musharraf verdict, the government has decided not to file a reference against him in the supreme judicial council as it would inflict bigger damage on Pakistan at the international level.

Senior Pakistani analyst Najam Sethi says it was expected that the government and the military establishment would try to use this observation to discredit the judgment and divert attention from the main verdict of high treason against Gen Musharraf.

He said the director-general of Inter-Services Public Relations (ISPR), Maj Gen Ghafoor, had earlier expressed the army’s reservations about the verdict. And after the release of the detailed judgment, Maj Gen Ghafoor said in a press conference that “those reservations are proving to be true”.

However, legal experts are of the view that the kind of language used against Justice Seth by the law minister and other senior government officials has given India a new opening in the Jadhav case.

Law minister Naseem, in the press conference, had said: “When such observations are given, not only is the court’s privilege hurt, it becomes a test for the administration of justice… Our request is, because he has proven himself to be mentally unfit and incompetent, he must immediately be prevented from working. We request the Supreme Court judges to restrain him from any administrative or judicial work.”

Rizwan told India Legal that now the issue of not filing the reference against Justice Seth has become irrelevant because both the government and the army have publicly questioned the verdict and expressed their doubts on the competence and integrity of Justice Seth.

According to Rizwan, the law minister in his exuberance to defend the army did not realise the serious implications his statements will have on the Jadhav case.

He said: “I wouldn’t be surprised if India files a review petition at the ICJ, citing remarks made by the law minister and the attorney general.”

It is clear that the judgment in the Musharraf case has put the Pakistani government and the military establishment between a rock and a hard place.