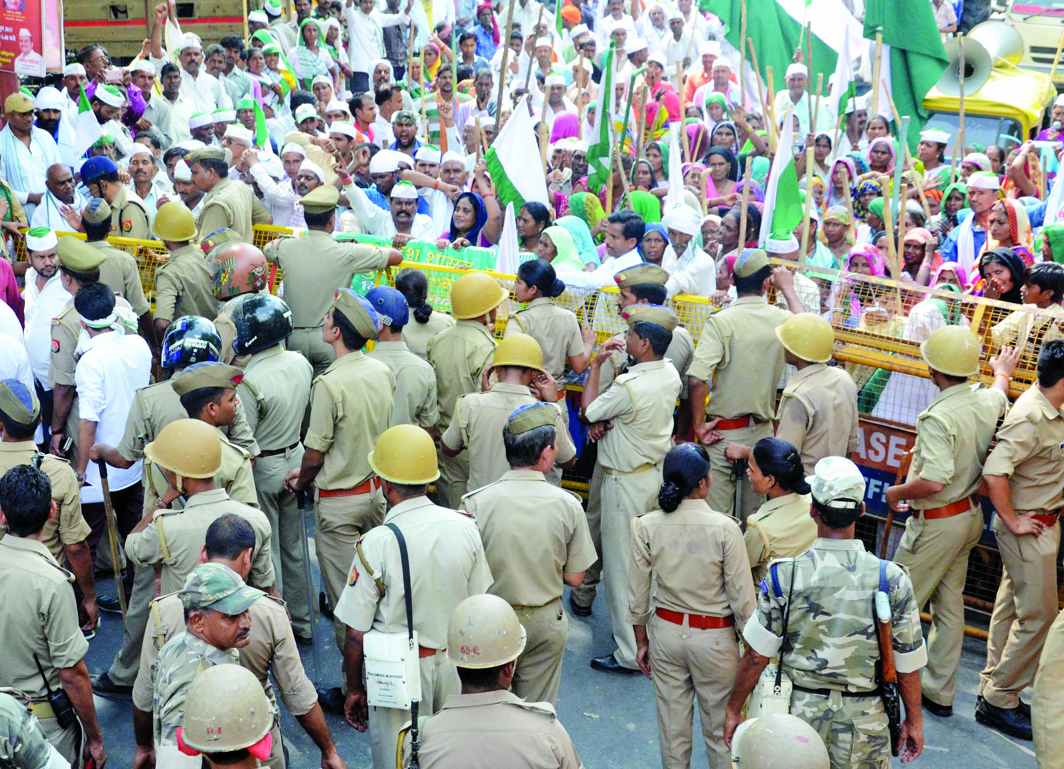 Above: Five farmers were killed by police firing during protests in Mandsaur. Photo: UNI

With numerous probe panel reports not seeing the light of day, there is scepticism about whether state governments are really serious about bringing justice to the victims

Judicial commissions are often formed by state governments to probe various crimes and involve great expense and time. Sometimes they are instituted just to stem opposition ire and curb growing protests. And they often provide jobs for retired judges.

In Madhya Pradesh, for example, a dozen retired judges have headed judicial commissions over the last decade of the Shivraj Singh Chouhan government and already Rs 8 crore has been spent on 12 such commissions. But hardly have any of the reports been acted on. The latest judicial commission in this state was formed to probe the June 6 police firing in Mandsaur in which five farmers were killed. It was headed by Justice JK Jain, who retired in January this year from the Indore bench of the Madhya Pradesh High Court. He was appointed on June 12 as head of the one-member judicial commission to probe the Mandsaur killings. The Commission will submit its report within three months of the issuance of a gazette notification on its constitution, official sources said.

The panel, to be based in Indore, will probe the circumstances of the firing and subsequent deaths, whether the police action was appropriate, if not, who were the guilty and whether civil and police officials took adequate steps in the run-up to the incidents. The farmers were on protest from June 1 to demand a loan waiver and remunerative prices for their produce. After five of them were killed, Chouhan ordered a judicial probe. Meanwhile, on June 21, the state government suspended the then district collector, the SP and a police officer.

Judicial commissions in UP often meet the same fate as in MP. On June 7, 2016, a commission was set up to probe violence in Mathura and was headed by Justice (retd) Imtiaz Murtaza. The commission’s term was extended twice but concluded without a probe. Finally, the High Court ordered a CBI enquiry.

On June 29, 2016, a one-man judicial commission headed by Justice Vishnu Sahai was constituted on the orders of the Allahabad High Court to probe the mysterious death of Gumnami Baba who died in Faizabad in 1985. He was believed to be Netaji Subhas Chandra Bose. The High Court in 2013 called Baba “an extraordinary person” and asked the state to set up a panel to end the controversy about his mysterious identity. The commission was to submit a report within six months but Justice Sahai is still investigating the matter.

Another judicial commission whose findings are still awaited was formed in October 2016 to probe a stampede in Varanasi during a Shobha Yatra of the successor of self-proclaimed godman, Jai Gurudev. In the stampede at Rajghat bridge, two dozen people were killed. The commission was headed by Justice Rajmani Chauhan and was supposed to submit its report in two months. The commission is still probing.

Judicial commissions in Madhya Pradesh are often cynically viewed as they seem nothing more than job providers for retired judges.

Similarly, in the 2013 Muzaffarnagar riots, a commission headed by Justice Vishnu Sahai was set-up. Though the report was submitted to the state government, it never saw the light of day.

Meanwhile, in Madhya Pradesh, the Justice Jain Commission has evoked a sense of déjà vu. The chief minister had ordered the setting up of an earlier judicial commission to probe the gunning down of eight undertrials by the police hours after their alleged escape from Bhopal central jail on October 31. At that time, Chouhan had pronounced the eight as “dreaded terrorists” before retired High Court judge SK Pandey took up the job of probing the killings.

The CM had ordered the probe and sought endorsement from a 10,000-strong crowd of party workers and sympathisers at Lal Parade ground here on November 1, the state’s foundation day. He again praised the police for their “heroic action” (sic) in his Republic Day address.

This time, too, there were undercurrents of a cover-up when MP home minister Bhupendra Singh darkly suggested that the shootout might have been the outcome of bloody clashes between two groups of anti-social elements. Three days later, he did an about-turn and admitted that the farmers fell to police bullets. The leader of the Opposition, Ajay Singh, alleged that the government had deliberately messed up the Mandsaur firing to influence the judicial probe.

Lajja Shankar Hardenia, convenor of National Secular Forum, a social organisation, said the Commission of Judicial Inquiry Act itself is flawed as it does not enjoin upon the chief minister to make commission reports public to the assembly. Opposition leaders and social activists say that having seen the fate of previous judicial commission reports, they have little hope that justice will be meted out to the victims of the police firing in this case.

In the undertrials case, the Congress had raised doubts about the Justice SK Pandey Commission. Amateur videos and a citizens’ fact-finding report had cast doubt on the official versions, leading to allegations that the deaths were staged by the police. The Pandey Commission was given a six-month extension in March this year after its three-month tenure had expired.

Justice Pandey’s appointment was mired in controversy. Shortly after his name was announced, former advocate general Anand Mohan Mathur wrote a letter to Chouhan to reconsider his decision. He wrote: “I have known Justice SK Pandey from the time he was a civil judge at Jabalpur. He is known to be a RSS sympathiser and, therefore, will not be a suitable person to conduct an impartial probe into such an encounter.”

For his pains, the nonagenarian had cow dung hurled at him by over 200 right-wing activists who gheraoed him at his home in Indore. They shouted slogans, called him anti-national and tried to blacken his face.

Justice Pandey is yet to visit the jail from where the undertrials allegedly escaped after killing a warden and overpowering a sentry. The row surrounding the setting up of the Commission prompted senior Congress leader Ramniwas Rawat to write to Governor OP Kohli: “The BJP government is in habit of instituting judicial commissions just to placate people and divert their attention from the real issue immediately.”

Over the last decade, the government has instituted nine judicial commissions and none of the reports have been acted on.

Over the last decade, the government has instituted nine judicial commissions and none of the reports have been acted on (see box). In 2015, the MP government constituted a one-member commission to enquire into the Petlawad explosion in September that year which killed at least 89 and injured 100. Retired High Court judge Justice Aryendra Kumar Saxena headed the commission. The report is still awaited.

Perks of the job

Source: Based on yearly budget provision made for commissions

In 2010, a judicial commission headed by Justice SL Kochar (retd) was formed to look into the leakage of gas from the erstwhile Union Carbide factory in December 1984 that killed over 5,000 and maimed over five lakh. Though it submitted its report to the government, no action was taken. External affairs minister Sushma Swaraj had in 2014 announced in parliament that the MP government was contemplating action on the Kochar Commission report which “states that prime accused of the biggest industrial disaster, Warren Anderson, was allowed to walk out of jail at behest of then Prime Minister Rajiv Gandhi and home minister PV Narasimha Rao”. Bhopal Gas Peedit Mahila Udyog Sangthan convenor Abdul Jabbar said the Commission was a hogwash. “It was instituted only to defuse the public outrage over a local court’s verdict that handed over ridiculously light punishment to the four guilty officials of the Union Carbide factory in June 2010.”

The most glaring inaction was on the report of the Justice SS Jha Commission set up by the MP High Court on August 21, 2008, to look into alleged irregularities in sale deeds and other corruption issues related to the Sardar Sarovar Project. The report was tabled in the assembly in July last year but is yet to be made public, leave alone acted upon. Narmada Bachao Andolan (NBA) leader Medha Patkar has been staging protests asking for the report to be made public. “The Madhya Pradesh government is sitting tight on the report and not taking any action against the corrupt officers who had siphoned off at least Rs 400 crore meant for rehabilitation,” she alleged. The Commission, she claimed, had detected nearly half of the land registry transfers it probed as fake.

Another judicial commission was the Justice NK Jain Commission set up on February 8, 2008, to inquire into a pension scam of the Indore Municipal Corporation. State Congress spokesman KK Mishra alleged that BJP national general secretary Kailash Vijayvargiya was involved in the scam in the Indira Gandhi National Old Age Pension Scheme when he was Indore mayor in 2000-2005. Mishra also alleged that the state tampered with the Jain Commission report and did not make it public.

—Inputs by Khurram Nizami in Lucknow