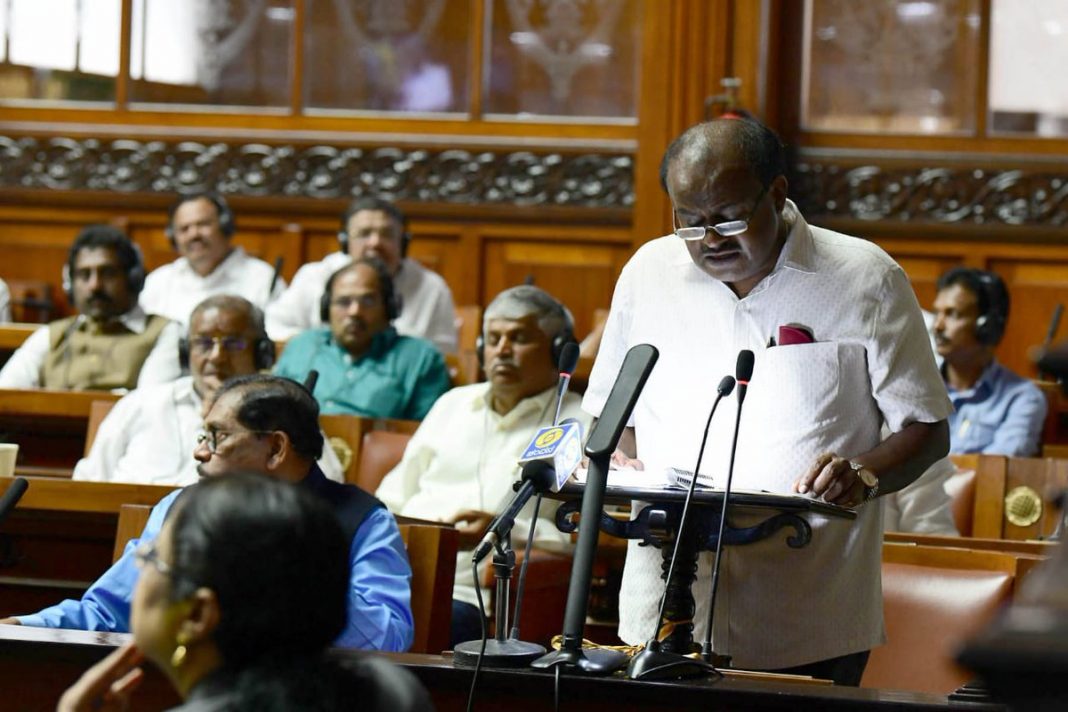 Hours before presenting the state budget on Feb 8, 2019, Karnataka chief minister HD Kumaraswamy dropped a bombshell at a hurriedly convened media conference to release excerpts from a covertly recorded phone conversation – dubbed audiogate – alleging BJP leader BS Yeddyurappa and his aides, backed by his New Delhi bosses, tried to lure JD(S) legislators to the other side.

The bombshell turned out to be a dud as the BJP hit back with a 2014 tape featuring then Opposition leader Kumaraswamy talking money. With both sides throwing mud at each other, Congress Opposition leader Mallikarjuna Kharge and former Prime Minister HD Deve Gowda raised the audiogate issue in Parliament. While Kharge said BJP was trying to lure a JD(S) legislator from Gurmitkal – Kharge had won eight times in a row from this Yadgir district seat, 150 km east of Hyderabad in north Karnataka – Gowda demanded a stringent law to tackle such poaching attempts.

But what turned the tide for the BJP was when Kumaraswamy released the complete audiogate version: a lone BJP MLA, Preetham Gowda, from Deve Gowda’s home turf, Hassan district, was heard saying that the JD(S) will disappear into oblivion once “Gowda’s wicket falls”. To add salt to the wound, the BJP Gowda claimed that Kumaraswamy’s “health issues” will also hasten the JD(S)’ exit from the politicalscape. No sooner than this appeared on the regional TV channels, JD(S) workers descended on Preetham Gowda’s house and threw stones in protest.

While the BJP quickly turned scars into stars by making the best use of a bad situation – Yeddyurappa led a delegation to meet Governor Vajubhai Vala, who had vacated his seat for Narendra Modi in Gujarat – the JDS and Congress coalition partners were grappling with their own challenges of dealing with rebels inside their parties.

Kumaraswamy, 59, may have lorded over Yeddyurappa, 76 – the latter had served as deputy chief minister under Kumaraswamy in 2006 – but the latter has a killer instinct to survive. His political acumen to survive political crises, the proverbial cat with nine lives, is no match to the young JD (S) leader who himself has admitted he has health issues. Kumaraswamy’s father HD Deve Gowda, who will turn 86 in May 2019, is fit as a fiddle with his yoga routines.

How does Yeddyurappa manage to keep fixated on his political goals? Karnataka BJP president Bookanakere Siddalingappa Yeddyurappa has been a chief minister of the southern state three times. A workaholic who entered public life as head of the Shikaripura Jan Sangh when he was just 29 in 1972, he wanted to take a shot at the CM’s chair hoping to sit there for the fourth time. But he ended up with SIT of a different kind: last week the 76-year-old Lingayat community strongman Yeddyurappa ended up with egg on his face after chief minister and JD (S) strongman HD Kumaraswamy released an audiotape that he claimed was proof that the BJP was making attempts to topple the ten-month old JDS-Congress coalition government. Yeddyurappa, of course, denied the charge although he admitted to meeting a key JDS contact who allegedly recorded the conversation on his mobile phone at Kumaraswamy’s bidding.

With the issue rocking the assembly session – with both sides slinging mud at each other – the speaker KR Ramesh Kumar advised Kumaraswamy to conduct a probe and give him a report within end of this month. Kumaraswamy wants a Special Investigation Team [SIT] to comb through the recording although the BJP legislators in the assembly demanded a joint house committee or even a retired judge to conduct the investigation.

BJP high command has reportedly asked Yeddyurappa to focus his energies on the forthcoming Lok Sabha polls and desist from making attempts to form a government with what Yeddyurappa hoped would be more than a number of disgruntled legislators from Congress and the JDS. BJP, with 104 seats in a 224-member assembly, needed just nine MLAs to reach the simple majority line. It hoped to tap additional support from independent legislators.

Although the JDS, which managed to use strong arm negotiating tactics to bag the chief minister post with a mere 37 seats, hoped to gain political mileage from the audio recordings, it has boomeranged for the party.

In an excerpt that was played in the recording, 35-year-old Preetham Gowda, the lone BJP legislator from Hassan district – the home base of former Prime Minister HD Deve Gowda and his two sons, Kumaraswamy and public works department minister HD Revanna – reportedly spoke ill of Deve Gowda and Kumaraswamy attracting the ire of local JDS workers who pelted stones at his house in Hassan. He supposedly tried to lure a key JDS operative to the BJP with inappropriate references to Deve Gowda’s advanced age and Kumaraswamy’s health.

For the BJP, however, Preetham’s victory in Gowda’s home turf was a positive sign that the party could open its innings in a predominantly Vokkaliga heartland. So, when the JDS workers expressed their anger with their rocky missiles and injuring one of the BJP workers at Preetham’s home in the process, Yeddyurappa didn’t waste time to lead a delegation to the Raj Bhavan and submitted a memorandum to Governor Vajubhai Vala protest attacks on the BJP workers there. Yeddyurappa said he will also lodge a complaint about the attack with the Union Home Minister Rajnath Singh. Like one of those skilled drivers, steering big trucks on narrow mountain passes, Yeddyurappa didn’t allow any slippery slope or boulders on the road to throw him off the edge. He has managed to move the spotlight away from the audiotape to attacks on a party worker.

Many times, he has said that his only desire to be in power is to strengthen Modi’s hands and help him get at least 20 [out of 28] Lok Sabha seats from Karnataka. With pre-poll surveys not indicating landslide victory for the BJP – and the likes of Patanjali group bigwig Baba Ramdev or central minister Nitish Gadkari making interesting statements – even Modi needs a BJP workaholic like the Shimoga strongman.

At 76, Yeddyurappa is still raring to go. Although he was born in the sugar rich Mandya district in the Vokkaliga strong Cauvery heartland in 1943, he cut his political, public teeth in Shikaripura in Shimoga district, where his fellow Lingayats number over three lakhs in number. He plunged into community life at an early age ever since he became President of Shikaripura taluk Jan Sangh in 1972; three years later, in the 1975 Emergency, he was jailed for 45 days at Shimoga and Bellary. The same year he became a councillor at the Shikaripura municipal council.

As secretary of Janata Party in 1977, Yeddyurappa led a 1,000-strong army of bonded labourers to the Shimoga deputy commissioner’s office demanding relief measures for them. He fought for landless people cultivating government lands without permission. He has worked closely with national BJP leaders including LK Advani and the late AB Vajpayee.

In 1980, when BJP was formed, he was elected Shikaripura taluk president of the BJP. And three years later, in 1983, he opened an account for the BJP in the Karnataka assembly. As Karnataka BJP President in 1988, he crisscrossed the state, to build it brick by brick. Whether his peers like his ambitious moves or not, his public outreach towards building a strong base for the BJP in the state cannot be questioned. The Lingayat community, the state’s largest caste bloc representing 18 per cent in a 70 million population, hasn’t found a bigger leader than him from the community.

Like a proverbial cat with nine lives, Yeddyurappa keeps floating like a lotus in the murky waters of politics. Whether it is old RSS connections or sheer love for field work, the party headquarters are finding it tough to find an alternative leader with a mass base and deep reach like him. His modus vivendi: just work for the party, night and day.

Veteran Lok Sabha member, late HN Ananth Kumar who passed away recently aged just 59, had the political heft to be an alternative but he was neither a Lingayat or a Vokkaliga, two caste blocs who between them account for nearly 30 per cent of the state’s population [and who have cornered a lion’s share of state chief ministers]

Yeddyurappa cannot blame the dynastic politics of JDS or the Congress because his two sons are also actively involved with the party: while the older son, BY Raghavendra, 45, is a two-time Shimoga MP, the younger son BY Vijayendra, 43, is the one is the closest Man Friday to his father. Vijayendra is actively involved in a family run educational trust in Shimoga and has learnt the art of public outreach like his father and continues to be the go-to man who has become his father’s closest aide. His supporters are sure to succeed in helping him get an assembly ticket from the BJP top brass.

For the nearly five decades of work in their home district, it is not surprising that Yeddyurappa’s home district Shimoga is a strong BJP bastion. In 2009, Raghavendra emerged a giant-killer when he defeated a former Karnataka chief minister and Idiga community strong man Sarekoppa Bangarappa by a 52,000-vote margin. Last year, in the by-elections, Bangarappa’s son and JDS candidate Madhu lost to Raghavendra.

Even if the SIT report shows him in bad light, it is highly likely that the party top brass will drop him like a hot potato: when Prime Minister Narendra Modi came calling to the north Karnataka city of Hubli to kick off the Lok Sabha elections poll rally, Yeddyurappa was very much on the dais. He was not declared persona non grata.

Kumaraswamy, who shares a good rapport with both Sonia Gandhi and her son Rahul, is also amused at the antics of some of his coalition partner legislators, four of whom have been so defiant with the state Congress leadership that they cocked a snook at the party honchos by absenting themselves from CLP meetings. CLP leader Siddaramaiah has cracked the whip and has petitioned the Speaker to disqualify these defiant MLAs. There was more trouble for the Congress when in one of its resort-politics sessions, one Congress MLA hit a fellow Congress MLA so hard that he had to be admitted to hospital for a long time.

The question for the BJP is simple: who needs enemies?

For now, the BJP national leaders must console themselves with a line from a play written by Roman playwright Terence in 160 BC: auribus teneo lupum. Holding a tiger by the tail. Even if they do nothing or something, it is an unsustainable situation. Both are fraught with danger. Both risky.

Audiogate or not, Yeddyurappa who will celebrate his 76th birthday on Feb 27 is sure to leverage every window of opportunity for the BJP in the April 2019 Lok Sabha elections.