The Court has ruled that legislative privilege cannot be extended to provide legal protection to criminal acts by lawmakers. Destruction of property in the name of protests should not be tolerated, it said. 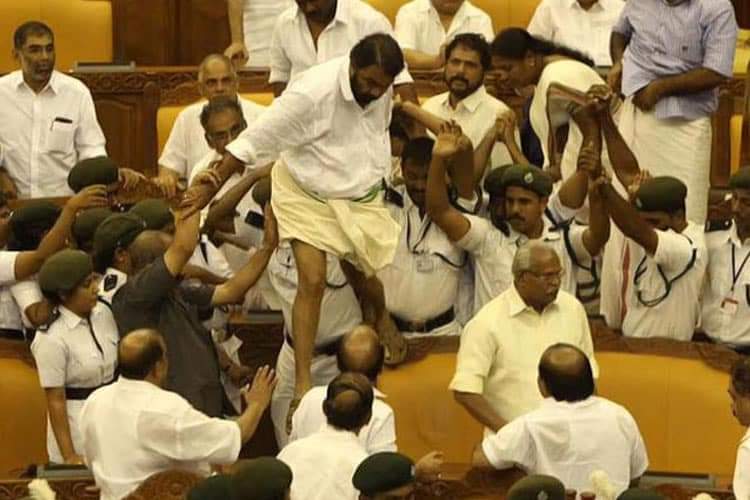 In a landmark judgment on July 28, 2021, the Supreme Court dismissed the Kerala government’s petition seeking to withdraw cases against six former LDF MLAs who were charged with vandalism in the Kerala assembly in 2015. The MLAs damaged furniture and articles close to Rs 2.20 lakh on March 13, 2015, when the finance minister was presenting the budget.

At the behest of the Secretary to the Legislative Assembly, the police registered cases against the MLAs for criminal trespass, mischief and destruction of public property under the IPC and the Prevention of Damage to Public Property Act, 1984. The chief judicial magistrate took cognizance of the charge sheet. On appeal, earlier this year, the High Court ruled that the six LDF legislators should face trial in the case.

Following this, the Pinarayi Vijayan government moved the apex court seeking permission to withdraw the cases against the MLAs. In its plea, the Kerala government averred that the budget session of the assembly in 2015 was carried out in a “charged atmosphere” and the allegations of nepotism were levelled against the finance minister and it was during the protests by Opposition members that the alleged chaos ensued. It was argued that the alleged vandalism took place as part of the legislators’ right to protest on the floor of the House and, therefore, should not have been taken into the domain of criminal prosecution.

An apex court bench of Justices DY Chandrachud and MR Shah ruled that legislative privilege cannot be extended to provide legal protection to criminal acts committed by the lawmakers. Offences under penal laws cannot be protected either by privileges or the right to free speech. There is a growing consensus that acts of destruction of public and private property in the name of protests should not be tolerated, the Court observed.

Privileges and immunities are not gateways to claim exemptions from criminal law which governs the action of every citizen. “To claim an exemption from the application of criminal law would be to betray the trust which is impressed on the character of elected representatives as the makers and enactors of the law,” the Court said. Further, it observed that the object and purpose behind “privileges, immunity and free speech” conferred on MPs and MLA “is to create an environment in which they can perform their functions and discharge their duties freely”. The “essential function” of the House is collective deliberation and decision-making, the Court elucidated.

“It was not the intention of the drafters of the Constitution to extend the interpretation of ‘freedom of speech’ to include criminal acts by placing them under a veil of protest. We miss the wood for the trees if we focus on rights without the corresponding duties cast upon elected representatives,” it added. The bench held that allowing the prosecution, therefore, to be withdrawn would only amount to a singular result that elected representatives are exempt from the mandate of criminal law. The Court consequently held that criminal prosecution of the legislators should continue.

Articles 105 and 194 of the Constitution provide for Powers, Privileges and Immunities of Houses of Parliament and Legislatures, respectively, as well as for their Members and Committees. Clause (2) clearly states that the members of these bodies shall not be “liable to any proceedings in any court in respect of anything said or any vote given by him in Parliament or any committee thereof”. Thus, the exemption extends only to “anything said or any vote given”, but not to anything done.

Moreover, the entire episode is not only about violation of common law by way of causing damage to public property; it is equally about defilement of the sanctity of proceedings of legislative bodies. The Monsoon Session, 2021, which started on July 19, has been witness to unruly scenes too, with graffiti from torn papers being flung at the Chair by some of members assembled in the well of the Houses. This led to the cardinal sin of passing of certain Bill amidst the din. M Venkaiah Naidu, Chairman, Rajya Sabha, resorted to a unique shaming device by ordering that the daily bulletin should list the business which could not be transacted due to disturbances in the House.

Of course the Rules of Procedure and Conduct of Business in the two Houses provide for dealing with unruly members: they can be suspended for the day or a few days or for the remainder of the Session, as has been done both in the Parliament and various state assemblies time and again. Thus, if the unruliness is confined to a few members, the Presiding Officer of the House has no hesitation in taking action against them; but if a large number of members belonging to several parties troop into the well, it is neither practical nor in the interest of the eclectic proceedings of the House to suspend the entire Opposition.

But again, the freedom of speech of some of the members cannot be allowed to trample upon the freedom of speech of the remaining members. Disruption of the proceedings of the House denies certain members their rights to put questions and hold the government of the day accountable for its actions through other devices. This too is a matter of privilege.

In the past, on certain occasions, when the proceedings of the House were disrupted, the aggrieved members gave privilege notices against those who did not allow the House to function with the dignity and decorum that it richly deserves.

The Rules of the two Houses provide for action to be taken for “breach of privilege”, the cases relating to which are referred to a Committee of Privileges constituted by the Presiding Officers. The Committee is required to determine whether a breach of privilege is involved and, if so, the nature of the breach and the circumstances leading to it and can make such recommendation as it may deem fit. The notices of privilege given by some members of a House against other members in this regard have, however, proved to be non-starters in the overall interest of dignity of Parliament.

The primary reason for this impasse, which prevents effective action being taken for breach of privilege against those who disrupt the proceedings of the House, is that the privileges of the honourable members have not been clearly and specifically defined. Both the relevant articles of the Constitution (105 and 194) have, in effect, left it to the respective legislatures to define them by law. This so far has not happened.

The issue of codification of the privileges by enactment of a law by the Parliament has been raised and discussed on various occasions in different fora. The Committee of Privileges of the Lok Sabha took up consideration of this matter on two occasions in 1994 and 2008. Both times, after detailed deliberations, it recommended against codification.

Coming to international precedents, in Canada, according to the Rules of Senate [(Rule 43(1)], it is the duty of every senator to preserve the privileges of the Senate. Its violation by any Senator affects those of all Senators and of the Senate to carry out its functions. Therefore, action to ensure such protection takes priority over every matter before the Senate. The most fundamental privilege of the Senate is the right to regulate its affairs; in other words, to establish its own rules of procedure and enforce them. Any action found by the Parliament to be an offence against any of these specific rights is considered to be a breach of privilege.

What then is the way forward, as far as Indian Parliament and state legislatures are concerned? One option is that in the event of continued disruption of the proceedings of the House, if no substantial business could be transacted during the day, the members of the House should, in view of the doctrine of collective responsibility, forego their sitting fee for the day. This is because it is neither the treasury benches nor the Opposition which could be exclusively held responsible for failure to conduct business in the House.

It is time that the privileges of the Members of Parliament as well as the legislative bodies are codified to define not only their rights, but also their duties, and the failure of which may attract exemplary punishment, including expulsion.