The Kerala High Court has lashed out at the state government, accusing it of turning a blind eye to judicial orders that were passed even as early as a year back.

“If no attempts are made to implement orders that are passed by the court, then what is the point of passing these orders. Are minister there only to go on foreign jaunts. This court has lost trust in the government,” Justice Devan Ramachandran said while considering a contempt petition against the government. Justice Ramachandran was referring to a court order dated October 17 last year that had asked the government to settle the salary arrears and other benefits of employees of a state public sector undertaking. The court kept in mind that most of the employees were elderly people and asked the government that there should be no delay in making their settlements. But when the government didn’t make their final settlements even after one year had passed by, the petitioners approached the court.

The court did not spare the bureaucracy either, observing that IAS officials sitting in air-conditioned rooms did not understand the hardships of the common man. The judge said every day the newspapers are coming out with the way the state finances are being managed. Of late, the Congress-led opposition has also sharpened its attack on the Vijayan government, for indulging in extravagancy and poor financial management, which has left the state coffers empty. 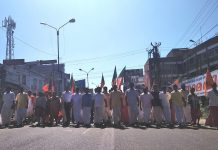