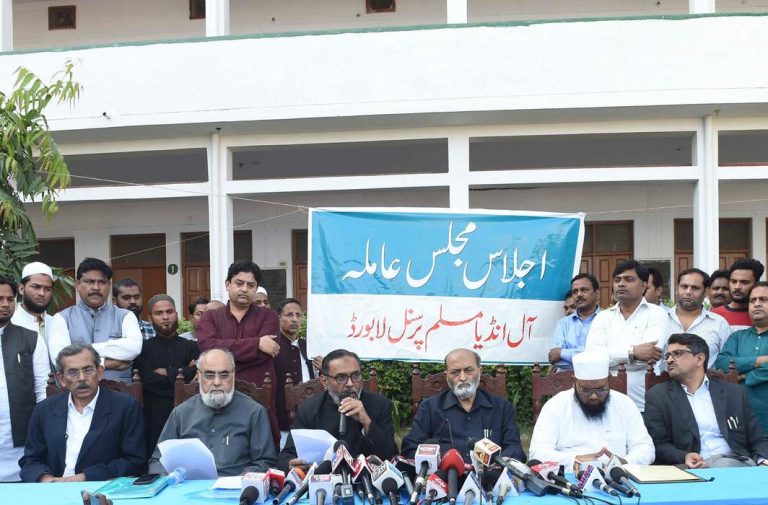 Above: AIMPLB members addressing a press conference on filing a review petition/Photo: UNI

The Ram Janmabhoomi-Babri Masjid title suit is likely to enter its final phase with some Muslim parties deciding to file a review petition against the Supreme Court’s verdict which went in favour of the Hindus.

On November 9, a five-judge bench headed by then Chief Justice of India Ranjan Gogoi (who retired on November 17), unanimously ordered that the entire chunk of the disputed 67-acre land be handed over to a trust for a Ram temple. Muslims, the judgment said, should be given five acres either from the 67 acres or at a different location in Ayodhya.

It is this five acres which the Muslims are not happy about as neither the central government nor the UP government may even consider allotting alternative land for a mosque near the periphery of the 67-acre parcel. And even if they do, the Vishwa Hindu Parishad and other Hindu outfits, such as the Ram Janmabhoomi Nyas and Nirmohi Akhara will be up in arms over the decision.

Sensing that the odds were against them, the All-India Muslim Personal Law Board (AIMPLB), which decided to file the review petition against the judgment, rejected the five-acre offer saying that their case was not for land at an alternative site but for ownership of the Babri Masjid land. On November 17, the AIMPLB said after a day-long meeting that three litigants—Mohammad Umar (whose father Mohammad Farooq along with Hashim Ansari was one of the six original litigants), Maulana Mahfuzur Rehman and Misbahuddin—have given their consent for filing the review petition within 30 days of the Supreme Court verdict. Four others—Maulana Hizbullah, Haji Mehboob, Haji Asad Ahmed and Hafiz Rizwan—gave their consent to the AIMPLB to file the petition on their behalf. Haji Asad Ahmed and Hafiz Rizwan are the sons of Haji Abdul Asad, one of the first litigants.

The AIMPLB meeting was presided over by its chairman Maulana Rabey Hasani Nadwi and attended by 45 of its 51 members. These included Hyderabad MP Asaduddin Owaisi, Jamiat Ulama-i-Hind’s (JUH) Maulana Arshad Madani and Mehmood Madani, besides the Board’s general-secretary Maulana Wali Rehmani.

However, one faction is opposing Madani’s stand. It is led by Maulana Qari Mohammad Usman. He found the Supreme Court judgment one-sided.

The main Muslim party to the case, the UP Sunni Central Waqf Board, stuck to its earlier stand of not challenging the verdict. “We stick to our old stand of accepting the Supreme Court verdict. Filing a review petition would mean doing a volte-face. If any other litigant wants to file an appeal, they can,” Board chairman Zufar Faruqui was quoted as saying.

Iqbal Ansari, son of Hashim Ansari who was one of the main litigants, disagreed with the AIMPLB’s decision. He is among the three Muslim parties, including the Sunni Waqf Board and the UP Shia Waqf Board, who are opposed to the move of filing a review plea.

Briefing the media, JUH’s Maulana Arshad Madani said: “The judgment accepts that the evidence and arguments were in favour of the Babri Masjid. The order, however, was not based on merit and evidence and defied logic.” He said the judgment was not final and there was a window for review.

Pointing out loopholes in the verdict, he said that the Supreme Court and the Archaeological Survey of India had clearly stated that no temple was demolished to build the Babri Masjid nor was any archaeological evidence of a temple found under the mosque. He referred to the strong comments made by the Supreme Court on the mosque’s demolition and the placing of idols. Both the acts were illegal, the Court had said in its verdict. The Allahabad High Court also held that in 1949, the idols were illegally placed in the mosque first in the outer courtyard and later moved to the central dome. The apex court bench also called the demolition of the mosque as an act of vandalism. It also acknowledged, Madani said, that for about 90 years, namaz was being offered at the Babri Masjid.

The JUH, he said, was committed to taking the fight to its logical end as defending the Masjid till the last breath was a Sharia obligation. Ruling out shifting of the mosque, he said that accepting an alternative land was out of the question.

Zafaryab Jilani, convener of the Babri Masjid Action Committee, also said: “The Waqf Act 1995 and the Sharia have no provision for exchange or transfer of mosque land.”

As members of the Sunni Central Waqf Board will meet on November 26 to decide whether to accept the offer of alternative land or turn it down, Jilani hoped that they would respect the views of the Muslims in rejecting the offer. He assured them that rejection would not amount to contempt of the Supreme Court.

Muslims were also peeved that the district administration forced them to change the venue of the meeting at the last minute from Islamic seminary Darul Uloom Nadwatul Ulama to Mumtaz Degree College in Lucknow. Zafaryab Jilani called it a “coercive tactic”. He alleged that district officials had visited AIMPLB chairman Maulana Rabey Hasani Nadwi earlier and told him not to hold the meeting at Nadwa.

The administration, however, denied any wrong-doing and said that permission was not sought for the meeting. Jilani countered that such meetings can be held at private properties.

The Muslims are obviously unhappy about many things.