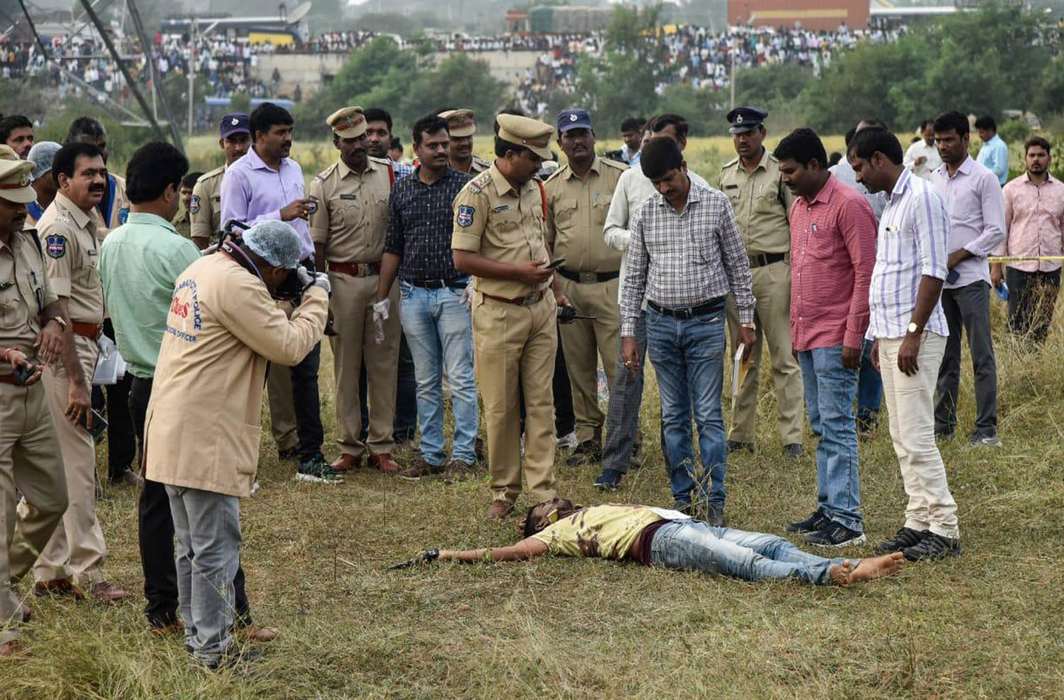 Following the nationwide outrage over the recent gang rape and murder of a veterinarian in Hyderabad, the four accused were killed in an encounter by the state police. But what is the legality of the police carrying out these extra-judicial killings? The Hyderabad police said they shot the four accused at the crime spot, where they had taken them for reconstruction of events and recovery of evidence. They had apparently attempted to escape. Their killing was widely celebrated but some human rights organisations have questioned the police for not having conformed to the requirement of due process.

The Telangana High Court, responding to a petition by 15 women and human rights activists, ordered that the bodies of the four accused be preserved till December 9. It also directed that the video of the post-mortem independent forensic examination by experts from outside the two states be handed over to the principal district judge, Mahabubnagar, and then to the registrar general of the High Court. The petition alleged that Supreme Court guidelines were violated in the encounter.

The Telangana government constituted a Special Investigation Team (SIT) headed by Rachakonda Police Commissioner Mahesh M Bhagwat to investigate the encounter. A government order was issued in this regard: “The cause and circumstances leading to the death of the four persons should be ascertained with reasons and establish truth and in view of the fact that the case requires sustained and focused investigation, a SIT is constituted to investigate the case,” the order said.

A petition was also moved by two lawyers in the Supreme Court questioning the legality of the Hyderabad encounter. The petitioners, GS Mani and Pradeep Kumar Yadav, wanted it urgently listed and alleged that the Telangana Police intentionally gunned down the four accused. Even Chief Justice of India (CJI) SA Bobde voiced apprehensions over the tendency to seek “instant justice” and “revenge”. He listed the petition and informed the petitioners and the Telangana government that the Court had requested Justice PV Reddi to take up the assignment but that he had declined. The CJI said the Court would approach another retired Supreme Court judge for the job.

The petitioners sought a CBI or a SIT probe against Cyberabad Police Commissioner VC Sajjanar, who is a res­pondent in the petition. They said the encounter was a red herring, deliberately done to turn public attention away from the police’s inability to prevent such crimes against women. Another petition was filed by advocate ML Sharma which made parliamentarian Jaya Bachchan a party for “appreciating” the encounter and Delhi Commission of Women chairperson Swati Maliwal for publicly seeking a “quick hanging” of the accused.

This short-circuiting is omitting something rather important that is enshrined in Article 21: due process of law. It is obvious that due process of the law was not followed—yet celebratory reactions from various sections of society ignored this. Many questions have been asked about the encounter. Why were the police armed? Why did they not have a stun gun or a taser? This issue of armed police is one that is prevalent in some countries and distinctly absent in others. The UK and India fall in the latter category. It is crucial that the police remain unarmed for many reasons. Firstly, nobody wants to live in a police state. Secondly, there are potential risks to the public and even officers who can be killed in the line of duty. Besides, the art of communication is one of the best tools, and having a gun can make a police officer over-confident.

From experience in the US and other countries, it has been seen that having armed officers does not mean that they do not end up getting shot. Out of every 100 people in the UK, fewer than four owns a firearm, according to GunPolicy.org, a project run by Australia’s University of Sydney. In the US, there is more than one gun per person. “In a free and democratic society, there is going to be a balance between democracy, freedom and openness, and a police state—and none of us wants to live in a police state,” said Brian Dillon, former head of the Met’s firearms command who now runs the counter-terrorism consultancy Rubicon Resilience.

So why is it important to follow due process regardless of the guilt of the accused? Article 21 of the Constitution provides that “no person shall be deprived of his life or personal liberty except according to procedure established by law”. So it is a legal requirement that the state respect all legal rights that are owed to a person. Due process balances the power of the law of the land and protects the individual person from it. The government has to go through a series of legal procedures before it can take away our “life, liberty, or property”. Thus, the guarantee of due process is a very important factor in ensuring that we actually have individual rights that are promised to us.

Procedural due process refers to the constitutional requirement that when the federal government acts in such a way that denies a citizen of a life, liberty or property interest, the person must be given notice, the opportunity to be heard and a decision by a neutral decision-maker. Though Article 21 formally provides that a person’s life and personal liberty can be deprived so long as there is merely a “procedure established by law”, the doctrine of procedural due process mandates that this procedural law must be “fair, just and reasonable”.

To be absolutely certain that the four accused were, in fact, the rapists/murderers of the vet, a trial should have been conducted and this would have happened in a court of law and not by the police. The police, being an arm of the civil services, has to be entirely neutral. Substantive due process refers to the Supreme Court’s examination of the reasons why the government passed a law or otherwise acted in a manner denying a citizen or a group of citizens life, liberty, or property (regardless of the procedure the law provides).

The big question here is whether we in India want to go down the route of becoming a police state. Do we want armed policemen amongst us who willingly do the bidding of their superiors?

Originally an Austrian construct, a police state is a regime which exercises its powers arbitrarily through the power of the police force. People living in a police state may experience restrictions on fundamental freedoms like free movement and on freedom to express or assemble. It refers to regimes that deny fundamental freedoms to their people, especially a free press, freedom of expression and assembly. Such states control the actions and movements of their people with the help of repressive police and security forces that act in an arbitrary way.

In a police state, the following are commonly seen: raids, harassment and intimidation of dissidents by police, militarisation of domestic law enforcement, disproportionate prison sentences for political activists, creation of new laws for people because of their political beliefs, creation of special prison units, pervasive use of surveillance and criminalisation of ideology. The US, though originally modelled on the UK, has certainly become somewhat of a police state for many, including legal immigrants. So also for African Americans, Hispanics, and Native Americans. One does not define a police state as a place that represses all; it is a place that applies the tools of repression on those who challenge it. The US legal system has permitted virtually unlimited and unchecked police power, including repressive actions against the supposedly constitutionally protected free press.

There are several examples of police states. North Korea has mass surveillance routinely employed, including a vast network of informants who report to the authorities citizens they suspect of criminal or abnormal behaviour. China’s construction of a vast, all-seeing police state in its fractious far west has triggered a government spending spree worth billions to firms providing a hi-tech network of cameras and “re-education” centres. A country’s responsibility to protect its citizens from attacks that target the general population and that genuinely endanger public order and the survival of the state must be proportionate and as narrow and targeted as needed to address the specific threat. What we see in China, as elsewhere, are overreactions and vilification of entire ethnic or religious groups rather than efforts targeting individuals who commit crimes. The Saudi government’s murder of Jamal Khashoggi also portrays a police state action. The Saudis brutally suppress women’s rights activists too, especially after the alleged reforms, and reform leaders are known to have disappeared. More liberal-minded people like Khashoggi often left the country.

Finally, US studies have shown that racial profiling means that police with weapons end up hurting or killing far more African-American people than Caucasians. “Hurricane”, a protest song by Bob Dylan and co-written with Jacques Levy, is about Rubin “Hurricane” Carter, an American-Canadian boxer who was wrongfully convicted of murder and released after serving almost 20 years in prison. The song illustrates acts of racism and profiling against Carter, which Dylan describes as leading to a false trial and conviction:

While Rubin sits like Buddha in a ten-foot cell

An innocent man in a living hell

That’s the story of the Hurricane.

We need our Indian police force to remain unarmed and clearly on the side of civilians—not kowtowing to the powers that be. A police force that protects us and does not intimidate us. Is that asking for too much?

—The writer is Barrister-at-Law, Honourable Society of Lincoln’s Inn, UK, and a leading advocate in Chennai. With research assistance from Kabilan P

Lead picture: The body of one of the accused in the gang rape and murder of a veterinarian in Chatanpally, near Hyderabad/Photo: UNI 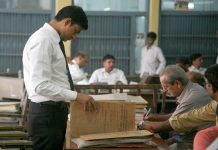 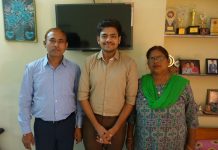 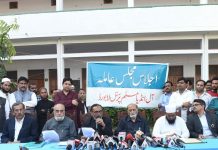