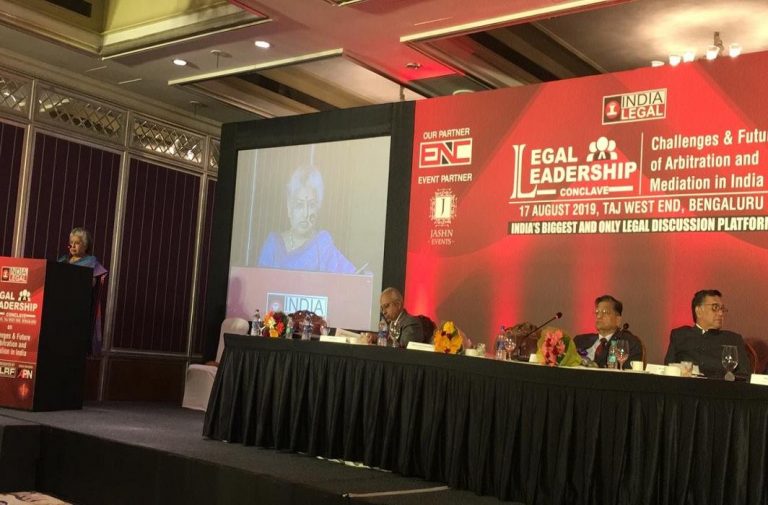 Justice B V Nagarathna, judge of the Karnataka high court said on Saturday that the training of the mediators and providing corresponding facilities to the trainers, the mediators and the litigants is a challenge. “The Emphasis should be not only training mediators but updation of legal knowledge too is important,” she said while speaking on the subject:  Mediation: Achievements and Challenges at the Legal Leadership Conclave organized by India Legal in Bangalore today.

At the outset, she noted that father of the nation, Mahatma Gandhi– was an effective mediator, spent most of his professional life in South Africa before he came to India, more as a mediator than as an advocate speaking for one side only.

Quoting from his autobiography, “after a successful mediation, but both were happy over the result, and both rose in the public estimation. I realized that the true function of a lawyer was to unite Parties riven as under. The lesson was so indelibly burnt into me that a large part of my time during the twenty years of my practice as a lawyer was occupied in bringing about private compromises of hundreds of cases. I lost nothing thereby- not even money, certainly not my soul.” This should be an inspiration for us in Mediation, restricted not only to the learned mediators, message is more to our advocates – give Mediation as a process of alternative dispute resolution, she said.

She pointed out that Section 89 of the court procedure was there in 1908, deleted in 1940 and re-inserted in 2002. Under Section 89, Mediation is recognized as the alternative to settlement of disputes between the parties.

She noted that the SC has exhorted the state government and central governments to take action for bringing into effect alternative disputes resolution. “The Legal fraternity talks of two concepts – Docket explosion and Docket exclusion. Today’s conclave is about Docket Explosion, how to curtail the Docket explosion in courts. One of the remedies found by legislature is Alternative Dispute resolution – by Mediation” she said.

According to her, the recognition of Mediation as an effective tool of dispute resolution — is an achievement to the regular court adjudication. Acceptance of Mediation by litigants is the corresponding challenge to that legislative recognition.”The core challenge is to encourage the litigant public to mediate the disputes,” she said.

She pointed out that the other aspect of mediation and infrastructure had two parts software, in the form of trained mediators and hardware which meant all facilities and amenities

Right now, the challenges before mediation were many. They include:

Ending on a positive and hopeful note, she said Justice should be loud and clear. “We are all warriors seeking justice, resolution of disputes, we want there should be peace in society and peace is now guaranteed through mediation because relationship is restored,” she concluded.

Sr Adv Sriram Panchu while speaking on the subject Arbitration and Mediation: strange bed fellows or harmonious partners, said: “In every litigation, relationship goes for a toss.” Mediation on the other hand respects relationships, promotes them and tries to save and salvage every bit of harmony left.

He quoted Chief Justice of Singapore on the question of choice of mediation as dispute resolution mechanism – “What’s not to like about it?” He said that Arbitration is result oriented, combining mediation and arbitration has one hurdle – confidentiality of mediation proceedings is breached in arbitration. So, one way is a mediator should never become the arbitrator in the same case.

Other salient points he made:

Like other speakers, he too emphasized on the need for training for mediators. “Not every good arbitrator is a natural mediator. Mediation should be a professional career option.  Else it will never flourish. It has always taken a backseat, which it shouldn’t. We must focus on supply of well-trained mediators as it will also bring down the case pendency scenario in India. Then it is going to be Appropriate Dispute Resolution instead of Alternate Dispute Resolution,” he said.

He said it needs to be kept in mind that Med-Arb (mediation-arbitration) as a form of ADR. For this, the first Statutory Reform that is needed need is the amendment of section 89-1 which will record in addition to what is already recorded the concept of Med-Arb, Arb-Med and neutral evaluation as a form of dispute resolution

Ashok R Patil, director of an consumer mediation centre while speaking on the subject of Online Mediation: the Future Technique of Mediation  referred to a a supreme court which said that access to justice must four essential elements:

There were two types of Online Dispute Resolutions:

All three parties have to be present at the same time in the first interaction, which is not so in a synchronize interaction

He said that with three crore cases pending in the courts across India, it was imperative that State provide software which is costly and space  that is needed to judicial process through ODRs.

The final speaker Deepak Sharma spoke on branding India as an International Mediation hub  and said that Branding India in any way when our methodology and technology is still in a nascent stage could only result in failure. “The time may not be ripe for India to be mapped on the global platform as an arbitration hub,” he said.