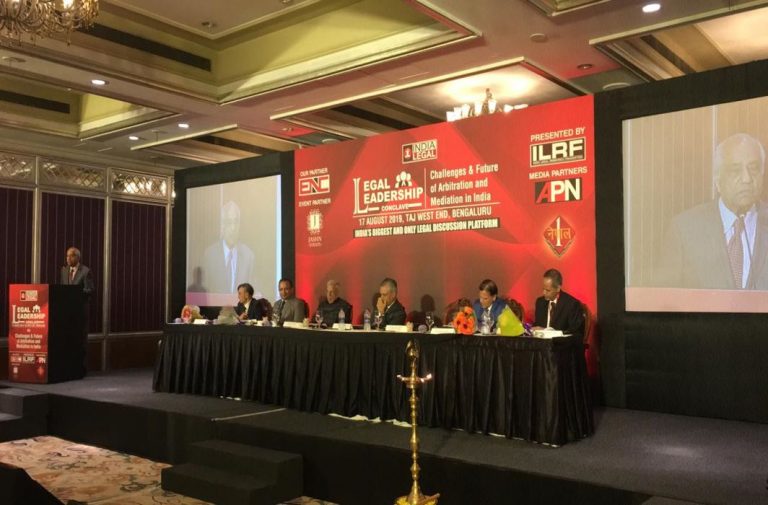 Justice B N Srikrishna, former judge of the Supreme Court of India said on Saturday that arbitration works out best when there is least interference by the state authorities.

Speaking at the Legal Leadership conclave organized by the India Legal group on the subject  “Challenges and Reforms in Indian Arbitration and Mediation System – Way Forward”, he said one of the fundamental premises on which arbitration revolves is that there should be party autonomy” . The lesser the interference by the state authorities the better is the spirit of Arbitration. Unfortunately in this country arbitration scenario is dominated by judges. The council should be independent in the sense it should not be dominated by any court or judge.

According to him, Mediation and Arbitration are the ideas whose time has come. Now if ultimately all resolution of dispute happens as result of Artificial Intelligence, the only place where natural intelligence can play is the human touch which is by arbitration which must be as informal as possible, he said.

Speaking in the same session on the subject, “Global trends in institutional arbitration and what are the challenges”, A S Uday Holla, former Advocate General of Karnataka asked:
“Why do people go to Singapore Arbitration centre or Paris? It is because the judicial interventions are very meager and very less.”

He referred in this context what Justice T S Thakur, the chairperson for the asesion had said during his opening remarks  that “ there is a need of change of mindset among the judges. Yes there are cases where arbitral awards are absolutely bad but then not in every case can the arbitral awards be set aside.”

He said while the global trend was towards e-justice, India is yet to embrace it in any measure “ Ultimately the need of the hour is justice at the earliest.”

It is this context that arbitration is a forum which all of us think is the most efficient and most time efficient forum for dispensation of justice.

“ Yes there are challenges. Courts everywhere are trying to match the arbitral proceedings itself,” he concluded.

Earlier, Justice Alok Aradhe  while speaking on the subject : Challenges to Arbitral awards – Commercial courts and need for Training of judges “  pointed out that the cost of commercial dispute resolution has gone down from Rs 10 lakhs to Rs 3 lakhs.

“Arbitration jurisdictions like Singapore and Stockholm are most successful because of sufficient support from the government and a skilled panel of arbitrators, besides the time-bound approach in the dispute resolution process,” he said.

He noted that parties directly had of late been directly approaching arbitration centres. “It is a positive outcome as it reduces case overload in the judiciary besides the individual dispute getting resolved amicably,” he said and expressed the hope that that the international arbitration centre which opened in Mumbai in July opened in July will make several positive achievements.

He also said that Judges must consider the adverse implication of modifying or interfering with an arbitral award as it plays into the ethos of the ADR mechanism. “Our country should be in sync with global standards. Arbitral awards thus should be upheld with the same sanctity as a judgment from the courts.”

Justice V Jagganathan, former Judge of the Karnataka high court  while speaking on the subject “  Arbitration as an effective tool for ADR process” pointed to the National Judicial data published recently which noted that there are 3 crore cases are pending in India and 65 lakh cases pending in the last 5 years. If this trend continues, the system itself will collapse like buildings collapse during earthquakes of floods. To address the issue, arbitration as the alternative dispute resolution has come as a boon for the people of India and particularly for investors who want to make investment and make India economically very strong.

He stated some reasons why the Arbitration Act needs to be implemented forcefully:

Avinash Ambale, an expert of Artificial Intelligence while speaking on the subject of Using AI in conflict Resolution said that AI does not understand language. “It understands codes. AI can do a semantic search, or a statistical analysis of words, much like the Google translates,” he said.

According to him, AI in the legal system can function through the LKIF(Legal Knowledge Interchange Format)· “But there are obvious gaps in data collation due to an absence of an exhaustive law lexicon, or a legal semantic dictionary that will tell the AI a single meaning attributed to each word. The AI can capture the literal meaning. However, there is pre-eminence of content that has interpretative value which will be lost in translation to the AI system. The single biggest thing lacking in AI is “adversarial inference”,” he said.

Other salient points he put forward were:

In conclusion, he said that currently, AI is incapable of “equitable distribution to all” which an ADR forum intends to achieve. “AI is completely data driven and can be fully relied upon for objective reasoning. A lot is still left for AI to achieve,” he said.